Popping Up at Grace & Grit: Burgers, Cocktails and More

Their Thursday Burger Night is really getting the North Fork popping. 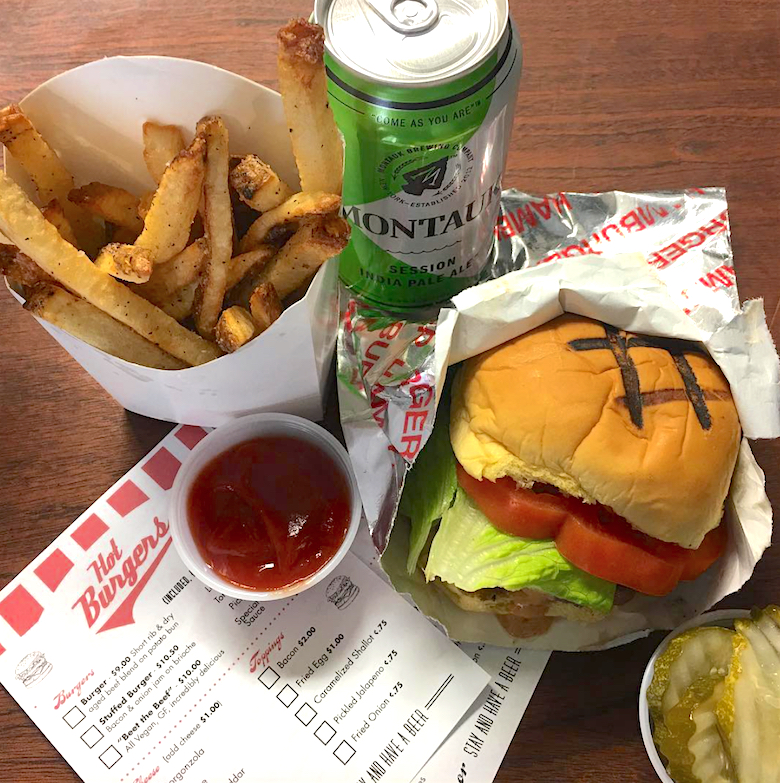 Not a bad way to spend a Thursday night, right? • Photo courtesy of Grace & Grit

Most folks think nothing new and exciting happens on the North Fork before summer. Local caterers Grace & Grit are proving that notion wrong. They started the new year off with a bang, hosting their first pop-up cocktail party at their tasting space and kitchen on the Main Road in Southold. It was so popular that latecomers left their phone numbers to get a call when seats opened up, and the crew decided to do it again the next weekend.

Grace & Grit started their pop-up events last fall, with a Thursday Burger Night that has earned a faithful following.

“I think we have to keep that going until spring, otherwise we might have a riot on our hands,” said chef and partner Jennilee Morris.

They also did Fried Chicken Fridays for about a month starting in December, but they want to stay true to the pop-up idea and change things often, so they’ll be experimenting with other ideas in the future. Jennilee says the fried chicken will probably be back, as will the cocktail parties.

Tasting and getting ready for this Saturday's pop-up cocktail bar at Grace and Grit. We open from 6pm-1am or later and have limited seats. Killer Menu by Chef Jennilee and her team will be posted later this week. Hope to see you all there for this collaboration with @doublespeak_cocktails

“The pop-ups give us the ability to experiment in the off-season and literally become anything we want overnight,” she said.

Grace & Grit is going into its seventh season of catering events, and while they specialize in weddings and other large affairs, they have diversified their business by doing holiday menus and more casual events like cocktail parties. They opened their new space in 2016 and doing pop-up events there seemed like a perfect fit for the off-season. It keeps their staff busy and engaged and benefits the community by providing good, fast food at reasonable prices.

#repost from @doublespeak_cocktails This is our Blanco Bitter Blossom – blanco tequila, fresh lime, raspberry syrup, orange & ginger peach bitters. We are hosting our monthly cocktail pop up in our tasting room this Saturday from 6 PM on. Come join us! 631-876-5221 for more info. 55750 Main Rd Southold.

The pop-up cocktail parties are also a fun, low-pressure way for potential clients to experience all Grace & Grit offers: excellent food, cocktails and hospitality. The last featured cocktail was the ‘Fast Break,’ made with rye, bitters, lemon juice, raspberries and egg whites. That was paired with a homemade flatbread with tomato confit and torn basil. Another aspect of their business diversification is Hired Hospitality, a service that provides staff for parties, galas, and fundraising events. It’s another way to keep their team working.

So what’s popping up next? Jennilee didn’t give a lot of details, but she did say that they’re collaborating with a great barbecue chef, so there will definitely be barbecue in the future.  There is also a supper club in the works, where they’ll serve multi-course meals and highlight their fine dining skills. Although the pop-ups will probably wane as the high season approaches, “we might throw in something during a lull in the spring or summer,” Jennilee promises.