No Frills, Just Great Food at Jimmy’s Diner in Mastic 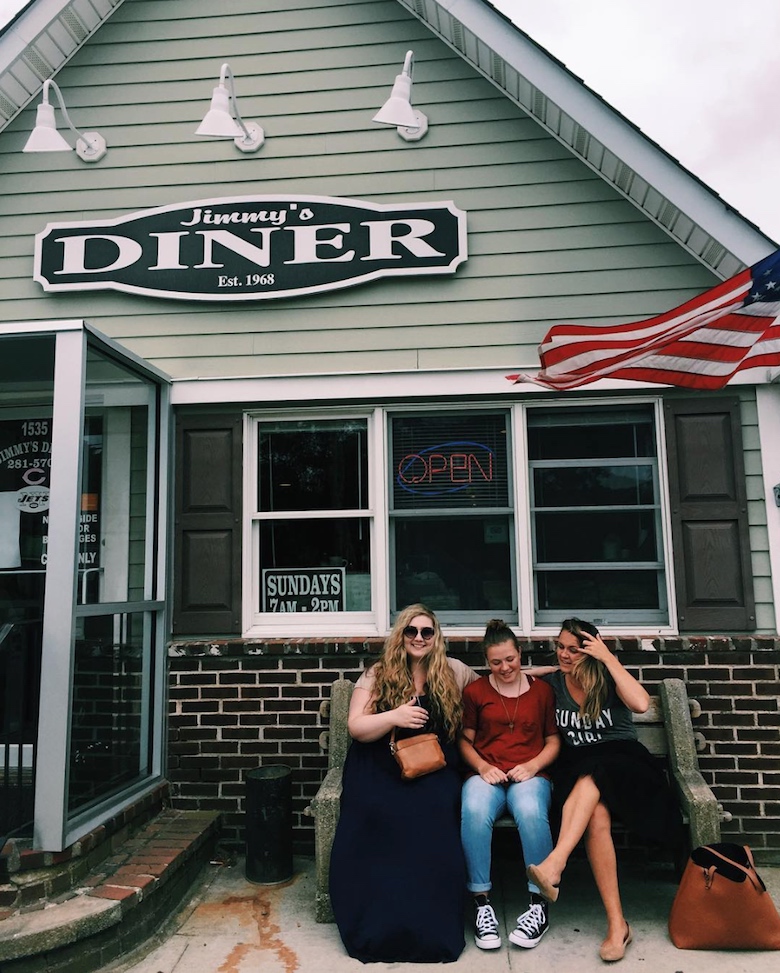 A group of friends pose outside Jimmy’s Diner before brunch. • Photo by Lindsay Schneider

Tucked away on a nondescript corner of Montauk Highway lives Jimmy’s Diner. The narrow restaurant is adorned without fanfare—the walls littered with a few sassy posters, Xeroxed, yellowing and curling at the edges. The tables are crammed with jersey-wearing diners filling up before Sunday Night Football, but there’s a vacant seat at the counter in front of a plain sign reminding people to “Count Your Blessings”.

The note held more power than intended, as diners are slowly losing their place in the democratic dining scene that their menus and no-frills ambiance pioneered. Walking through the doors of a diner, patrons are instantly transformed to equals—the woman with the Chanel bag is seated beside men in yellow construction vests just coming off their overnight shift. They’re treated with the same discreet and occasionally cheerful service, each of their coffee mugs refilled without prompting. So, sitting at the bustling counter at Jimmy’s Diner an hour before their three o’clock closing time, a wave of familiarity and nostalgia washed over me.

Coffee and water were presented with a sense of urgency, while I slowly perused the menu, littered with classics: omelettes stuffed with peppers, onions, and spinach, short stacks of pancakes (chocolate chips optional but highly recommended), and a buttery grilled cheese. The lack of quinoa and matcha is intentional, as diners like Jimmy’s are one of the few restaurants not buckling under pressure to adopt the pervasive farm-to-table philosophy that’s increasingly hard to avoid. It’s a welcome omission, though, because sometimes you just want to dip your bacon and tomato grilled cheese in a pool of Heinz ketchup without wondering if the pig from which the bacon was made lived a happy life.

Delivering my spinach-tomato-swiss omelette mere moments after ordering, the waitress returned quickly with a small paper plate stacked high with buttered toast and another grease-stained from my pork sausage links rolling around, trying to escape their fate of being devoured in single bites. The dining experience at Jimmy’s, executed without pomp-and-circumstance, is as enjoyable as the table-side card tricks at Eleven Madison Park—and at a fraction of the cost. Servers gleefully move behind the counter, refilling drinks and dancing to music that is barely audible above noise from diners and the car engines gurgling down the highway. Given its size, sounds are amplified and conversations are easily overheard, but no one feels the need to speak in hushed tones for fear of disturbing other guests. Instead, conversations become entwined among tables until the restaurant feels like a dinner party among friends.

Sated and smacking my lips with the last remnants of pork-flavored oil, I looked around the restaurant in wonderment, wishing places like Jimmy’s, the culinary mainstays of the Island, would prevail over fast casuals and finer dining. I burst out laughing after understanding the hidden—and simple—meaning behind the sign “Cash Only. If you want credit, ask Manager. Go to Hellen Waite.” Sure, they’re wasteful with paper plates and napkins, but the freshly baked apple pie and quirky but sentimental signs create a warmth deep within that no amount of locally-sourced butternut squash soup could reproduce.