On St. Patrick’s Day, a Hope for Less Green Beer and a More Thorough Understanding of Foodways

A recent event by Sylvester Manor and the Eastville Community Historical Society reminds us of the unifying power of food—and inspires writer Kelly Ann Smith to share a family recipe for Irish Soda Bread. 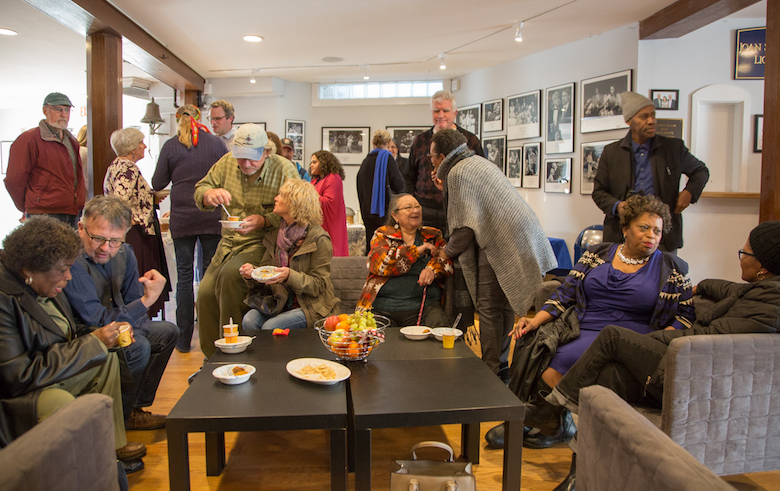 Guests mingle as they sample dishes inspired by the diverse culture on the Long Island’s East End.

“Our food is everything to us,” said Josephine Smith, a member of the Shinnecock Indian Nation. “But it’s more than just eating. Food, to us, is where we get it.” Shinnecock people go hunting and use more than the meat. Skin and bones are used for shelter and tools. After clam chowder has nourished the family, the clamshells are used to make wampum, or jewelry. If a plant is taken, it is used for more than just the berry. The leaves and the roots make medicine and tea.

Smith remembered her favorite dish, boiled blackberry dumplings. “I’m a food vendor at Pow Wows,” she said. “Boiled, sweetened berries—you can’t beat it.” If you eat too many dumplings, tea made from the blackberry leaves could cure your stomach ache. 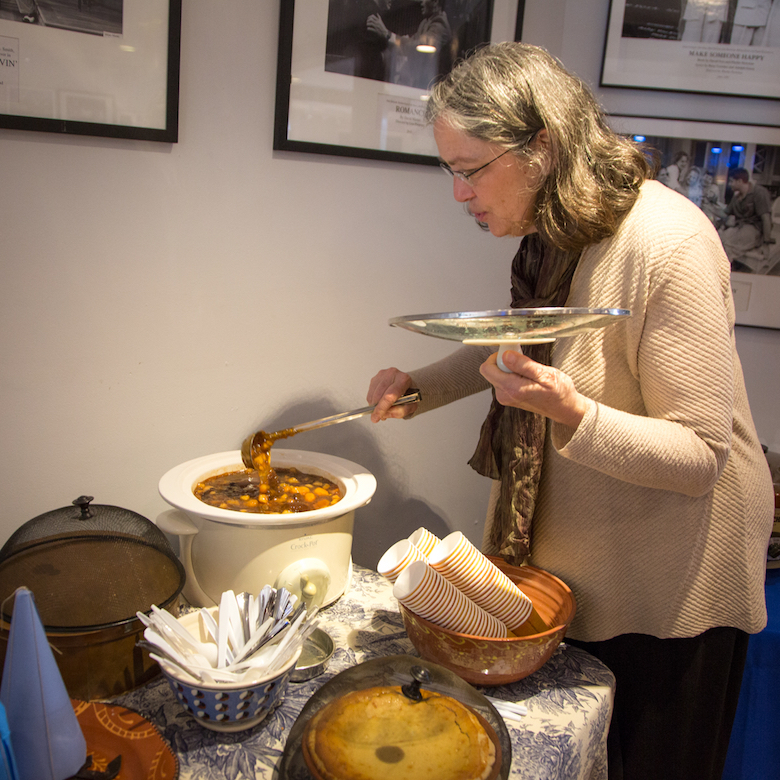 Sara Gordon, a plannining and conservation consultant from Sylvester Manor, tends to the stewed fruits.

Dressed in colonial garb, Diane Goldstein Fish, a food historian who re-enacts the Civil and Revolutionary Wars with her son in her spare time, started roasting chickens and potatoes at the age of ten, while her mother was at work. It was probably when her love affair with cookbooks began. She stopped collecting at 1865 before “Culinary Lady Gets Crushed by Cookbooks” became a headline.

In honor of the first Dutch settlers, Goldstein Fish made a fruit soup, which she shared after the talk. The boiled fruit looked more like beef stew and smelled heavily of clove, reminding me of happy holidays. Pickled eggs, dipped in beet juice gave me flashbacks of another kind, but I’m sure they tasted delicious.

Tatiana Tucci, Organization Latino American board member, came to the East End 17 years ago from Columbia. On her way from JFK, her driver said he wanted to stop for coffee. “What do you mean? You can’t stop for coffee, you have to sit down and sip it,” she said. “Do not eat when you drive.”

By making food a ritual and making that time special, food has the ability to change the way we see others in the world. “Food can bring people together even when they are not getting along,” Tucci said. “Who can turn down a good dish?” I certainly did not turn down her homemade, bite-sized empanadas. 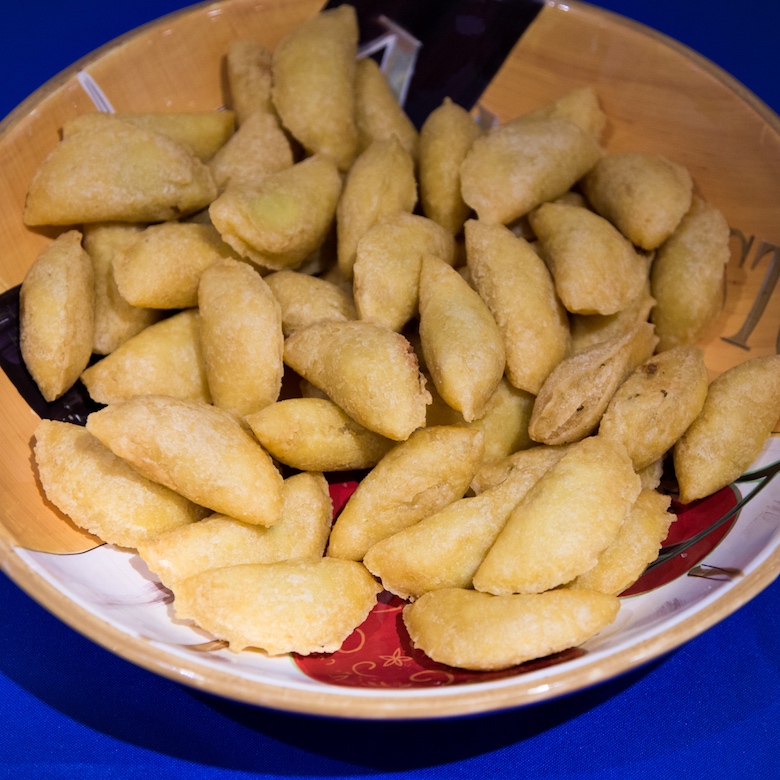 Empanadas provided by panelist, Tatiana Tucci, an active board member of OLA and native of Colombia.

Bennett Konesni, co-founder of Sylvester Manor Educational Farm on Shelter Island briefed the audience on the evolution of the farm’s history with food. An early bowl, found on the property grounds during an archeological dig, proved to be a true melting pot, incorporating elements of European Americans, Native Americans, and African Americans. Africans were brought to the farm as slaves, as part of the sugar cane industry in the Caribbean. Konesni’s wish is to keep the farm productive by bringing more joy and fairness to the process.

He presented paintings by William Sidney Mount (1807-1868), a Long Islander who was the first to paint people of color with dignity. Scenes depicted eel fishing, dancing in barns and drinking songs. In his spare time, the farmer, artist and musician teaches work songs to others in order to improve productivity in the fields, and let’s face it, have fun. 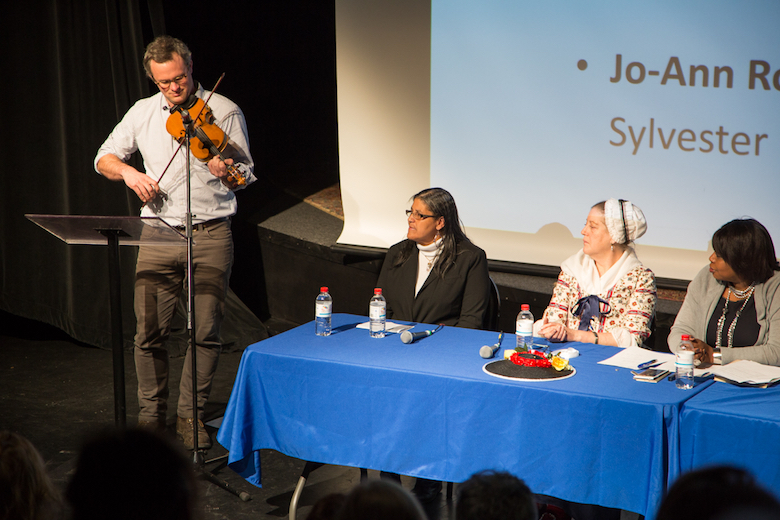 Bennett Konesni gives part of the presentation of “At Our Table”, sharing diversity, traditions and culture through food with the Eastville Community Historical Society.

When he took to his fiddle, to end the discussion, I couldn’t help but think of my own grandmother who immigrated alone to New York City from Ireland at 16-years-old to become a musician. She played the fiddle and accordion. She wasn’t a great cook but she made killer Irish soda bread, corned beef and cabbage, and sausages and peppers, perhaps as a nod to her Italian daughter-in-law, my mother.

As a nod to the foodways of my childhood, I offer my grandmother’s Irish Soda Bread recipe, with a few helpful tips: Melt the stick of butter. Do not touch the dough with your hands, as it will stick to them. Use a large spoon to mix all of the ingredients together. Use a 10-inch square baking dish and grease it well. The dough will spread when baking. This recipe is moist and not dry like the typical Irish soda bread. Happy St. Patrick’s Day! 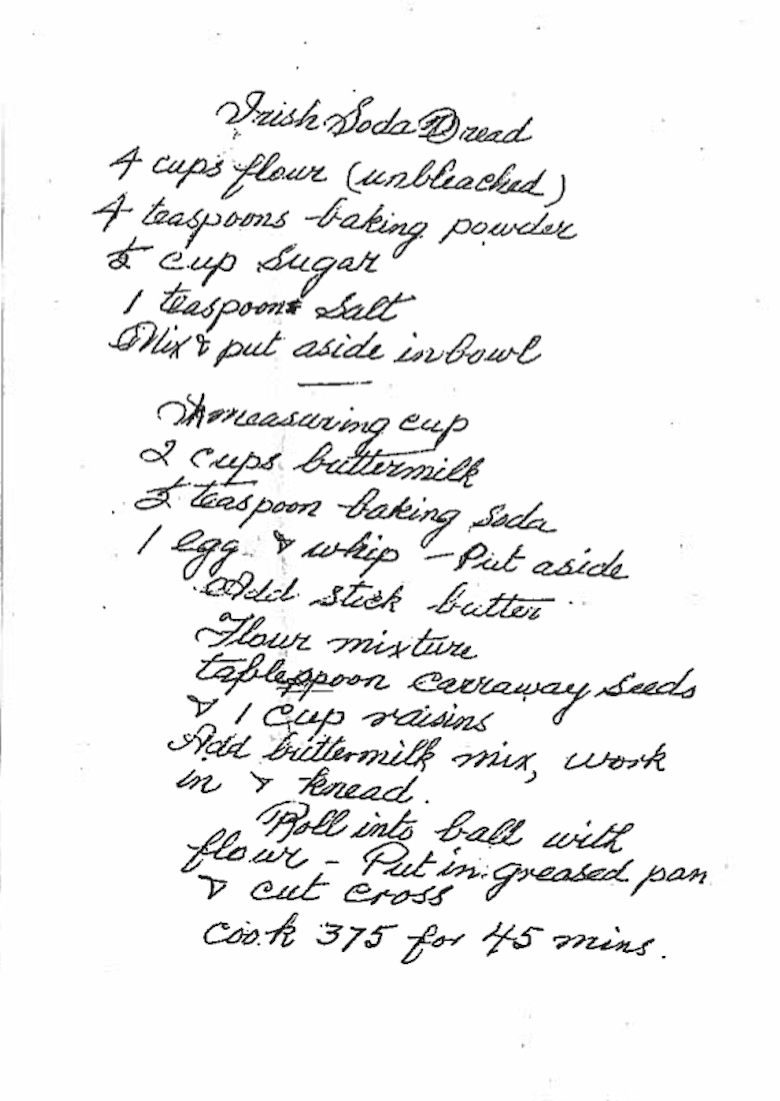