Thanks to the Farm Beyond, Forage-to-Table Is Flourishing on the East End

And we have the “wild” recipes from 18 Bay and PawPaw to prove it! 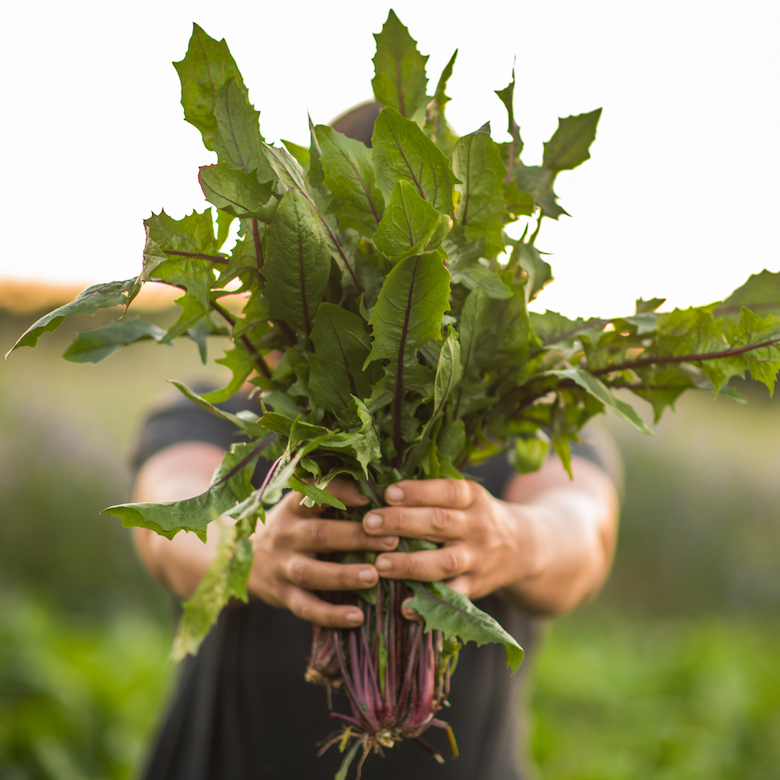 Forage-to-table is not a new concept. Our ancestors have been dining on the land since time immemorial, prancing about rural scapes, picking berries and nuts, slurping up sap from trees—it was a necessity for survival. Nowadays, searching for one’s food in the wild has become a commercial hunt to remedy a chef’s sense of monotony surrounding the usual farm fare; others are growing their own forageables, like Melissa and Edward Henrey of the Farm Beyond in Southold, who are cultivating eight organic acres of biodiversity: vegetables, flowers, successional cover crops and, in early spring, “wild” foraged plants.

“The foraging trend is great because people are getting out and connecting with the environment,” says Melissa. “But the tragedy of the commons—nature belongs to everyone but at the same time it belongs to no one—makes us very uneasy when large volumes of foraged plants are being taken out of their natural habitats, especially when there’s no accountability and it’s all done very secretively.” 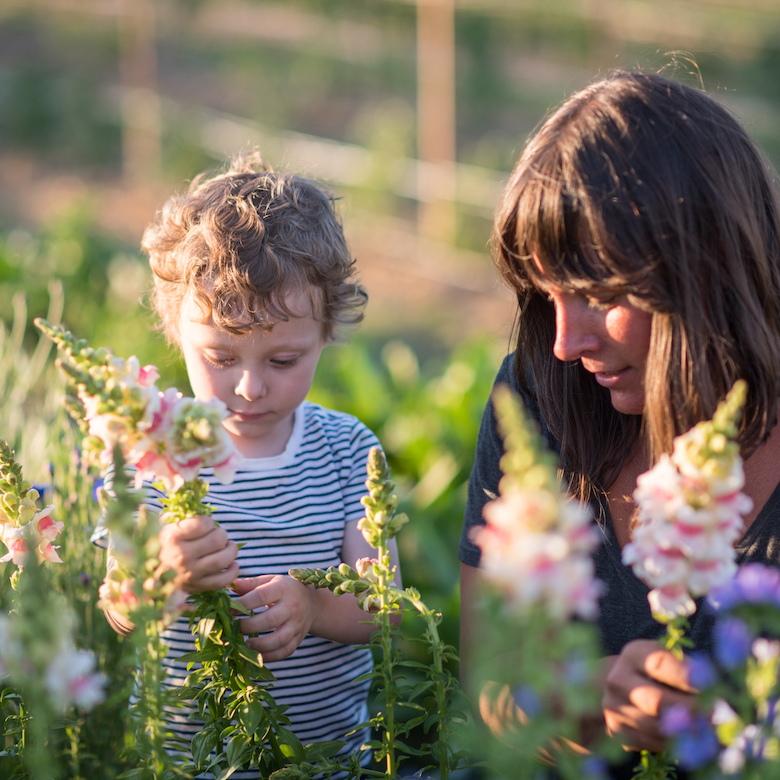 The Henreys have been championing and establishing at-risk varieties like ostrich ferns for fiddleheads and the ever-so-popular ramps. The latter are an endangered wild Allium on Slow Food’s Ark of Taste: an international catalog of endangered heritage foods that is designed to preserve at-risk foods that are sustainably produced, unique in taste and part of a distinct eco-region. The popularity of ramps in the past few years, the present foraging techniques and the quantities needed to meet the demand are putting botanists, environmentalists and naturalists on alert.

“Ramps are very difficult to germinate,” says Melissa. “But it is worth the effort.” 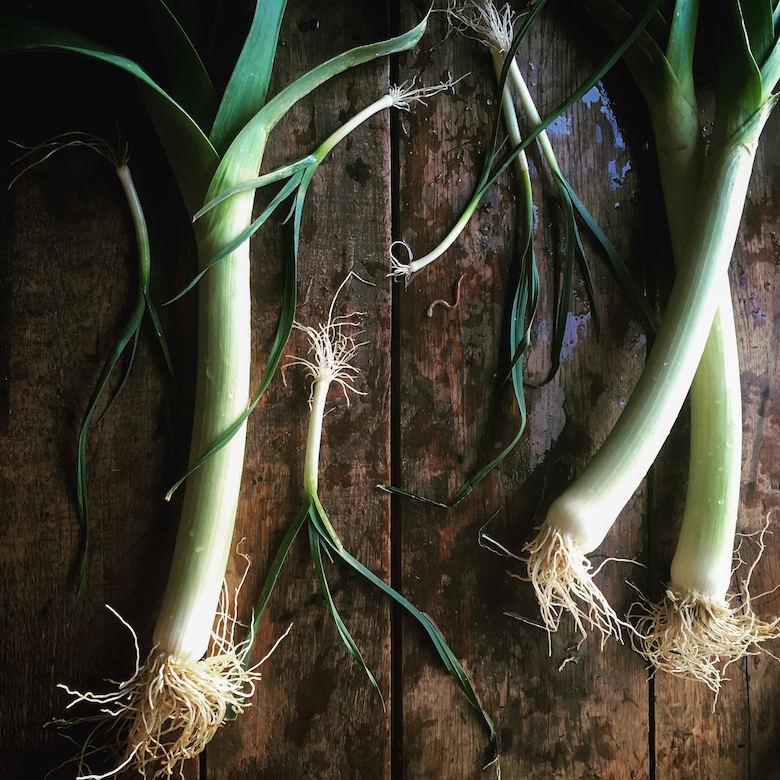 The ostrich fern is also on guard in the Canadian province of New Brunswick and has made its way to Slow Food Canada’s Ark of Taste due to the fact that the Saint John River Basin—a region where fiddleheads grow—is increasingly polluted with heavy metals and at risk of becoming unsuitable for human consumption. Not to mention the construction of the Mactaquac Dam that has destroyed much of the fiddlehead’s traditional growing sites in the area due to flooding.

“Being a new farmer to the East End, as we go into our sophomore year, we have the flexibility and creative discretion to really define ourselves and pivot as we see fit,” says Melissa. “We have a wide diversity of crops and feed off of the collaboration with small businesses that are aligned with our passion and enthusiasm for doing the right thing for our ecosystem.”

“The Henreys are brilliant people,” say chefs Adam Kopels and Elizabeth Ronzetti, owners of 18 Bay Restaurant on Shelter Island. “They are cultivating foraged products for chefs like us, who are aligned with their deep love of terroir and stewardship.” 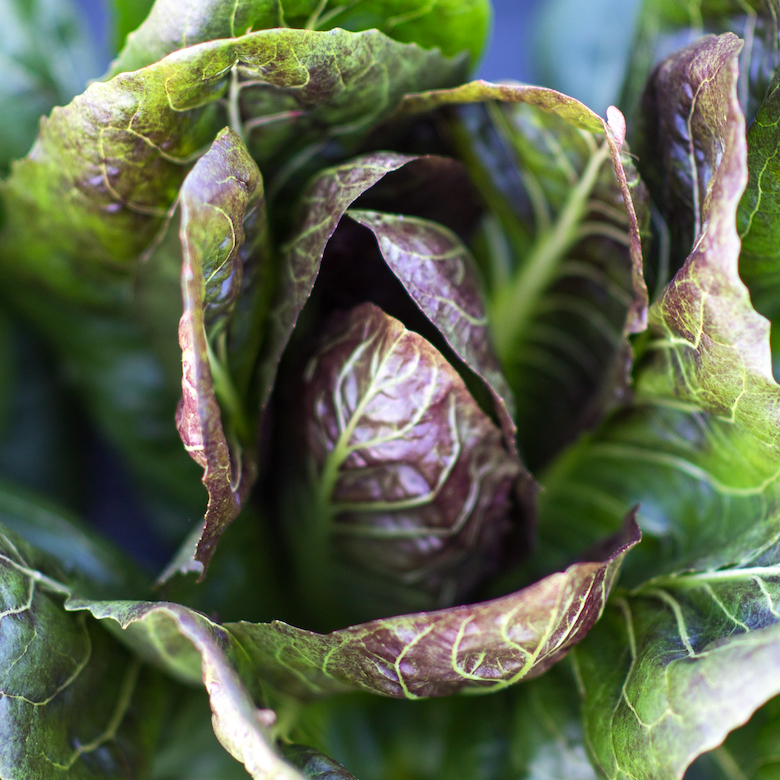 “We are the curators for local producers,” says Adam. “It has little to do with us, and everything to do with the farmer.”

“We meticulously explain to the staff the why of what is being served, to educate our staff and in turn our diners,” says Elizabeth. “We are committed to telling that story about the farmer and a region that deserves to be respected and preserved.”

And the story they tell is orchestrated beautifully—presented as a weekly four-course, Italian-inspired prix-fixe menu that starts with four different antipasti, handmade pasta, a choice of entrée, and dessert.

During the springtime, you will find the Farm Beyond’s vegetables and herbs of leeks, onions, mache, baby arugula and kale, pea shoots, ramps, fiddleheads, agretti, samphire, dandelions, French and sheep sorrel, salad burnet and mache; and two favorite wild chicories that Adam and Elizabeth adore: Rossa di Traviso (a classic tall Italian radicchio with red and white striped leaves that has a bitter and spicy taste) and Castelfranco (attractive rosette-shaped leaves green with red speckled color that has a slightly bitter flavor with sweet undertones). For an antipasti, they like to char the chicories and top them with Catapano Peconic Bel Cheese and a citrus herb vinaigrette. 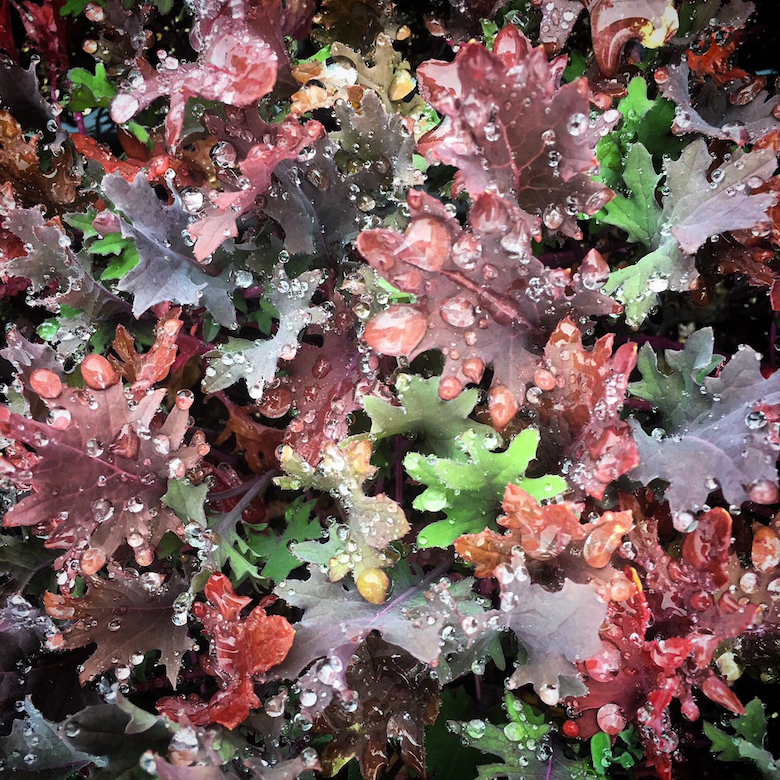 Taylor Knapp, the talented chef behind the pop-up restaurant PawPaw in Greenport, is also a “chef-to-farm” collaborator.

“I enjoy the mutual back and forth on what is available every week at the Farm Beyond,” says Taylor, whose restaurant is named after the pawpaw fruit, a delicate and hard-to-cultivate gem that comes and goes so quickly.

“The fruit defines a snapshot of life in that moment,” Taylor says. “And so, a nine-course menu of small bites is a metaphor for the fleeting growing season; enjoy it now, for it will be gone quickly.”

Some of Taylor’s favorite wild edibles from the Farm Beyond are baby root vegetables, edible flowers and stinging nettles—a weed that tastes like spinach and is typically steeped for tea, used often in soups and sometimes even made into pesto. Taylor likes to prepare stinging nettles baked with rice crisps and cooked with 8 Hands Farm pork shoulder in wild flowers and honey. He even makes crispy nettle chips with a touch of cHarissa, a favorite local spice.

“Our environment is under assault in so many ways,” says Adam back at 18 Bay. GMOs, pesticides, overfishing—but what about over-foraging? “This concept is a bit under the radar and still sits too cool on the finder meter.”

May I suggest we all take a walk on the wild side—and leave it to the Farm Beyond and chefs to tell the tale. 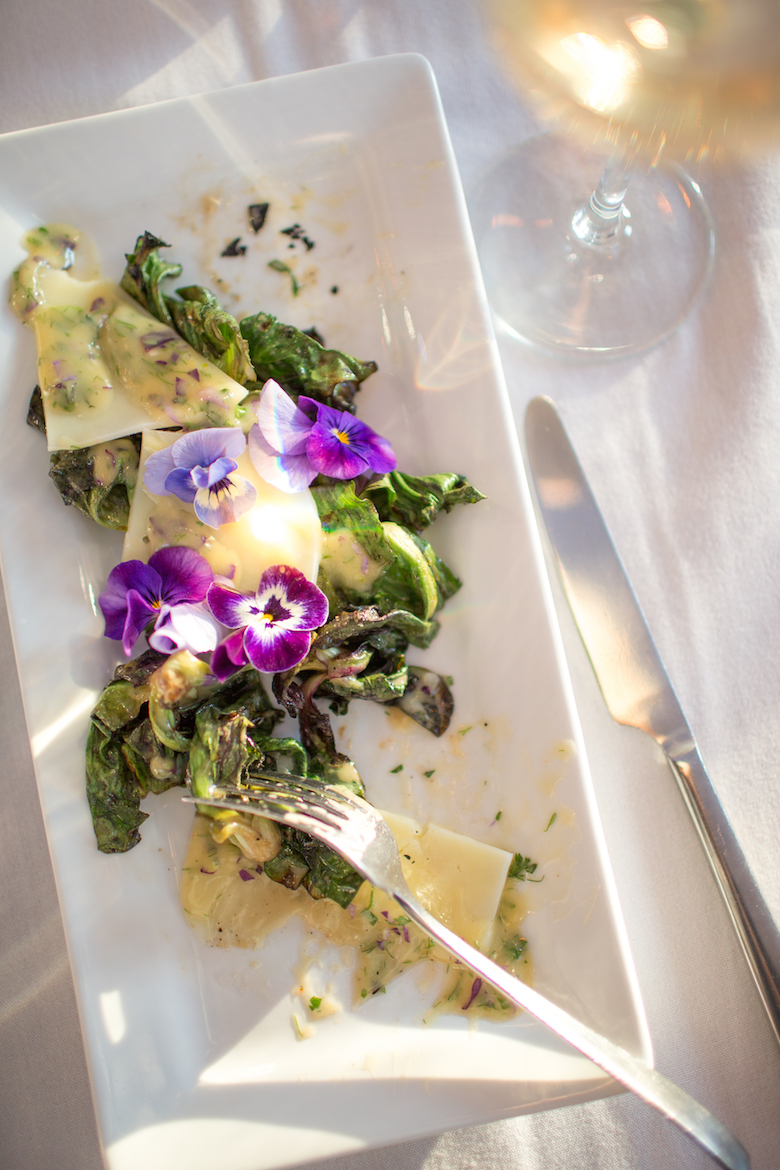 18 Bay Restaurant uses produce provided by the Farm Beyond to prepare a charred chicory antipasti with futsu squash and Catapano Peconic Bel. • Photo by Lindsay Morris

Ingredients:
½ cup citrus juice (We like tangerine lemon and lime, but any citrus you like works. Blood orange, grapefruit, all good.)
2 tablespoons honey
1 tablespoon Dijon mustard
¾ cup olive oil
½ cup chopped herbs (The Farm Beyond has a dizzying array of herbs that kaleidoscope with the season. Just go for soft and delicate herbs like parsley, chives, fennel fronds, and ask about occasional mixes of flowers and delicates like sorrel, salad burnet and mache.)

Directions:
In a bowl mix the citrus, honey and mustard until combined. Add oil a little at a time mixing vigorously. When combined, add herbs and season with salt and pepper.

Ingredients:
3–5 heads of palm-size chicories per person (if they are on the larger size, one large chicory per person will do)

Toss the chicory halves in the vinaigrette, reserving some for dressing the plate.

At 18 Bay we grill the chicories. A broiler works as well. The idea here is hot and fast. You want to char the chicories quickly to keep their integrity. The vinaigrette helps with steam and for caramelization. A few burnt crunchy leaves are to be expected.

Transfer the wilted chicories to a plate to cool slightly. These work great chopped into pasta, to wrap fish for steaming, on a turkey sandwich, and you’ll eat them the whole time you’re making them.

Assembly:
Place a layer of charred chicories on a plate. We prefer slices of the Catapano Peconic Bel—semi-firm, slicing sheep’s milk cheese from Catapano Dairy Farm. Lay the slices over the top to cover the chicories. Drizzle some of the vinaigrette, making sure plenty of herbs stick to the cheese.

Note: We love this for antipasti or as a side dish, but we have also served it warm and melted beside grilled lamb. 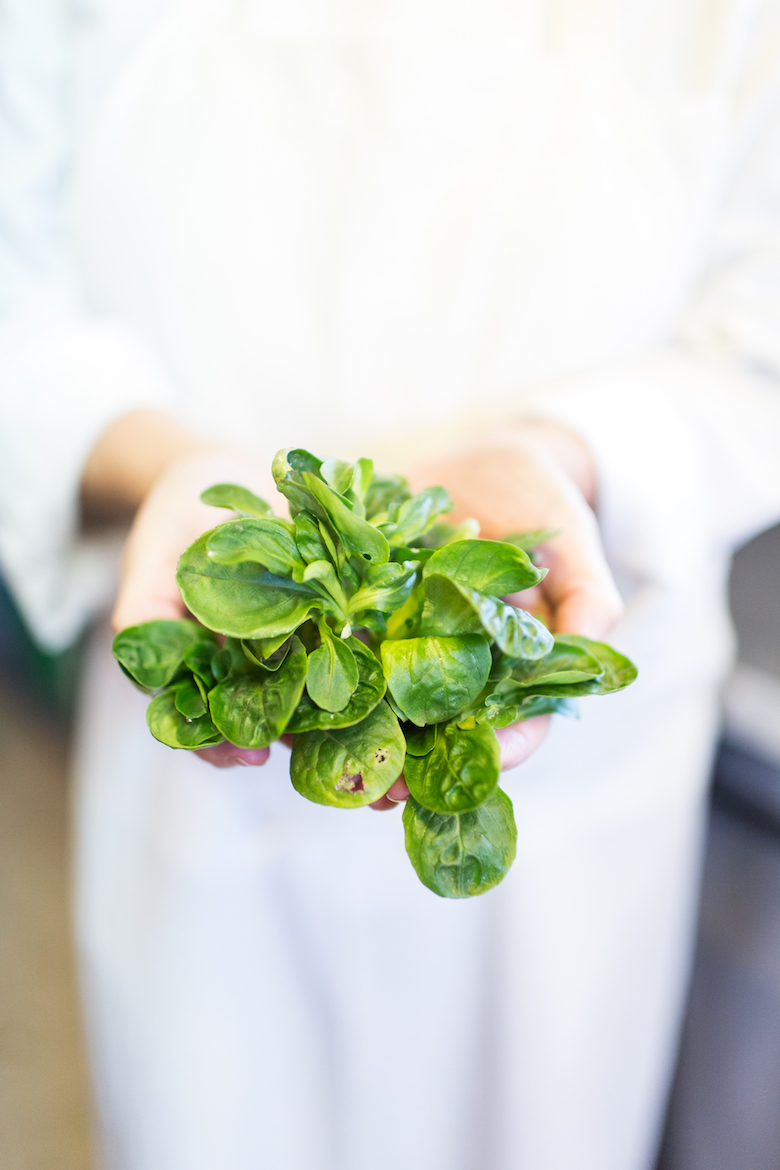 Directions:
Preheat oven to 300°. Toss the nettle leaves with melted fat. Spread on a baking sheet. Sprinkle on salt and spices (cHarrisa) to taste. Bake for 20–30 minutes until crisp, gently turning once with a spatula halfway through baking. Cool on paper towels.