An Intimate Pairing of the North Fork’s Finest

When the menu at Jedediah Hawkins meets the wine from Saltbird Cellars: magic. 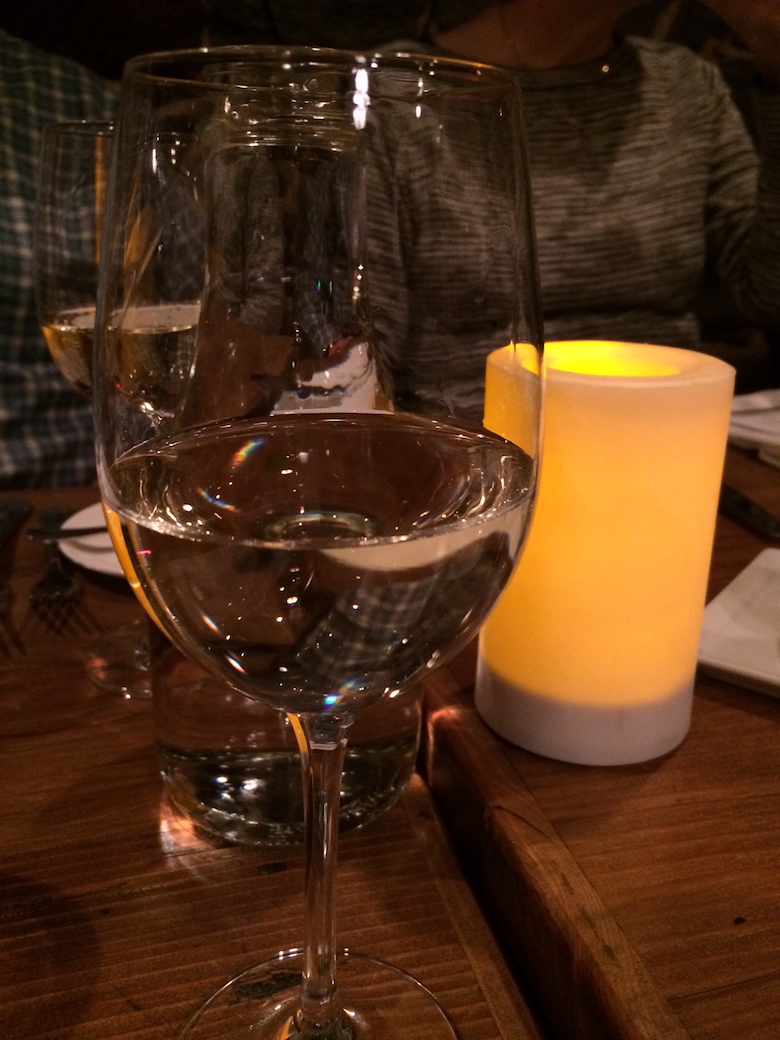 The first wine poured was Saltbird Cellars’ 2014 sauvignon blanc. 100% stainless steel fermentation, with hints of melon and starfruit, it was smooth and deliciously crisp.

The accompanying course, a piping hot bowl of French onion soup, with a layer of melted gruyere cheese on top. Beneath the cheese, chunks of French bread filled the soup, creating a hearty mouthful in every spoonful.

This rustic dish was the first course of a recent Friday’s food and wining pairing that featured the wines of Saltbird Cellars and the menu at Jedediah Hawkins Restaurant. Held in the inn’s basement speakeasy, the five-course meal showcased some of the best wine and food available on the North Fork. 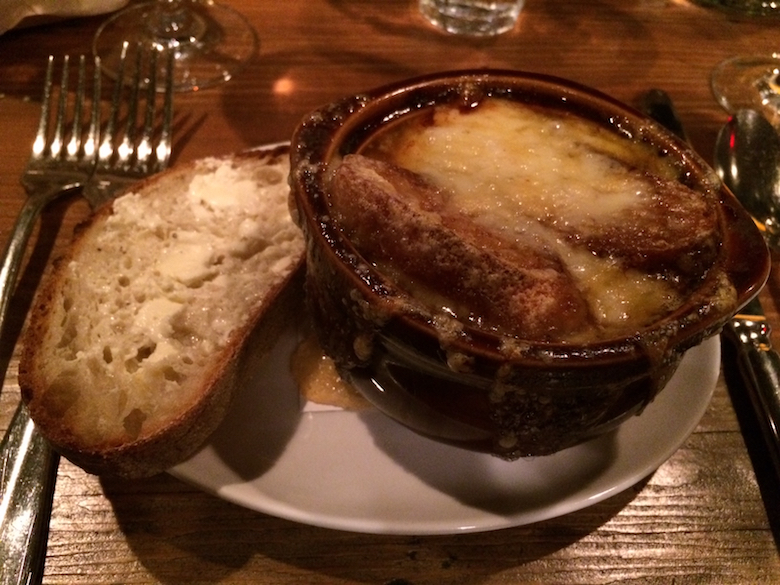 “We prepared a menu which utilizes products and ingredients to demonstrate all that the North Fork has to offer both culinarily and oenologically,” Mr. Keillor said. “We’ve had a long relationship with Robin and carry four of her wines on our wine list.”

Ms. Epperson-McCarthy, whose wines are made at Premium Wine Group in Mattituck, described the intricacies of pairing her first wine with a soup.

“Onions and any wine are a tough combination, but this sauvignon blanc goes through a phase during fermentation that has a mild Bermuda onion aroma,” Ms. Epperson-McCarthy said. “It evolves into something more sophisticated and fruity, but those flavor precursors are there just enough to compliment a well done French onion soup.

The second course, salmon rillettes, served with toasted slices of peasant bread, was flavorful, with just a tang of onion.

The accompanying wine, the 2015 Saltbird Cellars Chardonnay, had a rich, buttery flavor that suggested barrel fermentation.

“A lot of people think this is done in oak, but it’s all stainless steel,” Ms. Epperson-McCarthy said. “Usually salmon is served with barrel-fermented chardonnay because it’s a rich fish and barrel-fermented stands up to it. I think this goes better, because you don’t have the distraction of oak, but still have the fullness of the chardonnay.” 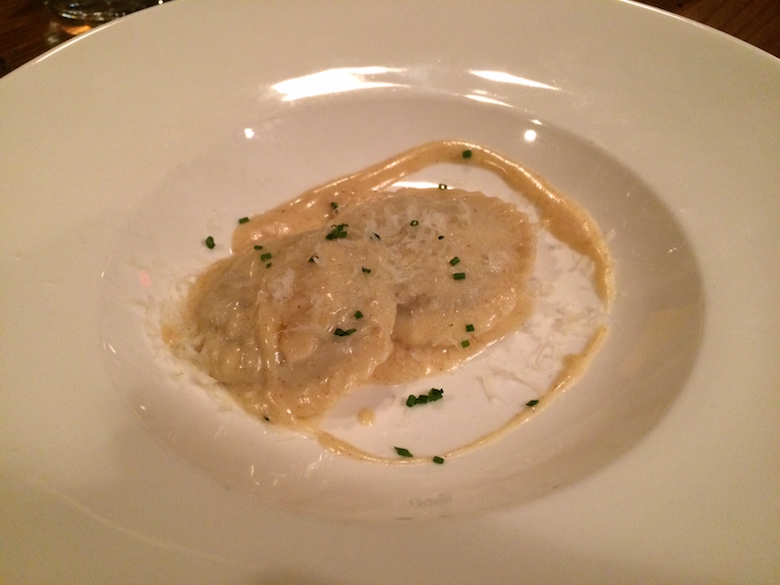 The third course was butternut squash ravioli, served with brown butter, pecorino and sage. Sweet and nutty, this dish was an explosion of flavor, the sweet filling enveloped by the sharp pecorino and pasta exterior.

“This is the reason I’m making wine,” she said. “I love this style of sauvignon blanc. Clean, ripe fruit gets a gentle pressing, light settling and then goes into neutral oak, where it evolves into a smooth, lush wine.”

The Migratus was very fragrant and stood up to the ravioli. The two played off each other, highlighting their flavors.

“This is a very meticulous wine, harvested by hand in the morning when the grapes are cool and done in barrel to get that fuller mouth feel,” Ms. Epperson-McCarthy explained. “Whereas stainless steel has that nice zest to it, this is smoother and creamier and can be paired with this beautiful ravioli.” 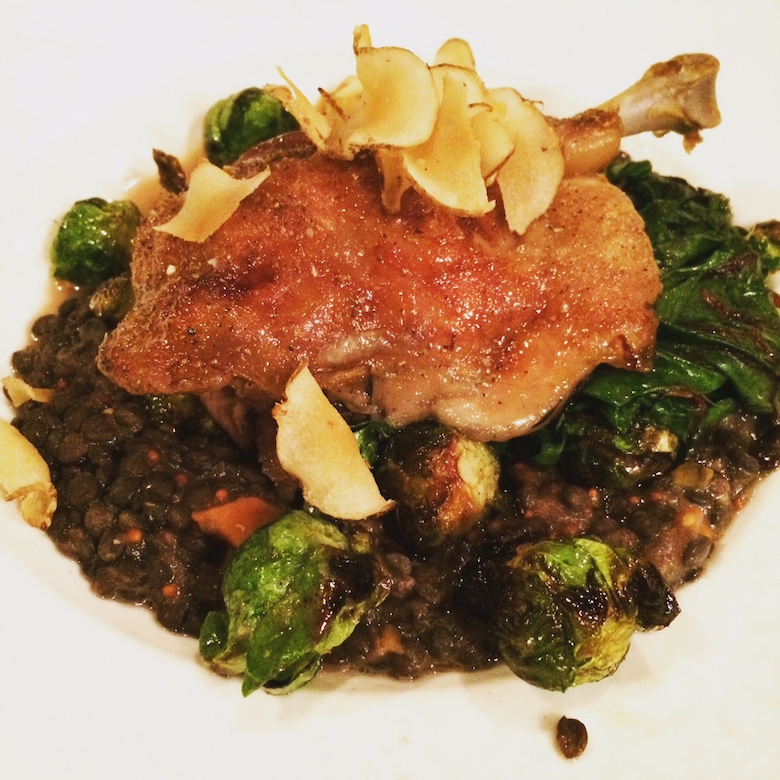 For this dish, Ms. Epperson-McCarthy reserved Saltbird Cellars’ newest wine, the 2014 Harbinger, which is 75% merlot and 25% cabernet sauvignon.

“We all know that Long Island merlot is really special,” Ms. Epperson-McCarthy said. “Combined with a bit of cabernet sauvignon for structure and some balanced oak aging, we have something worthy of Long Island duck.”

The duck was moist and meaty. The lentils, chard and brussels sprouts were just as buttery and delicious.

The Harbinger was fruity, earthy and full-bodied with a lovely bouquet.

“This is becoming a classic pairing out here,” she said. “It works really well with the gaminess of the duck and the fruitiness of the merlot, it’s a dark meat with a dark wine.”

Finally, dessert was a small dark chocolate pot de creme, that was big on flavor with vanilla bean chantilly, hazelnuts and salted caramel. A delicious end to a truly memorable meal.

Jedediah Hawkins’s next speakeasy event will be a repeat of their very successful raclette dinner with Michael Affatato of the Village Cheese Shop, this year with Sherwood House Vineyards, on Friday, February 17. For reservations call (631) 722-2900.

Saltbird Cellars will also host its next winter wine and food pairing on Friday, February 17, this time at Jamesport’s Bay Breeze Inn & Bistro. For reservations call (631) 779-3454.