In Greenport, American Beech Offers a Master Class in the Art of Restraint

Add the Mac & Cheese at American Beech to your list of reasons you love Greenport. 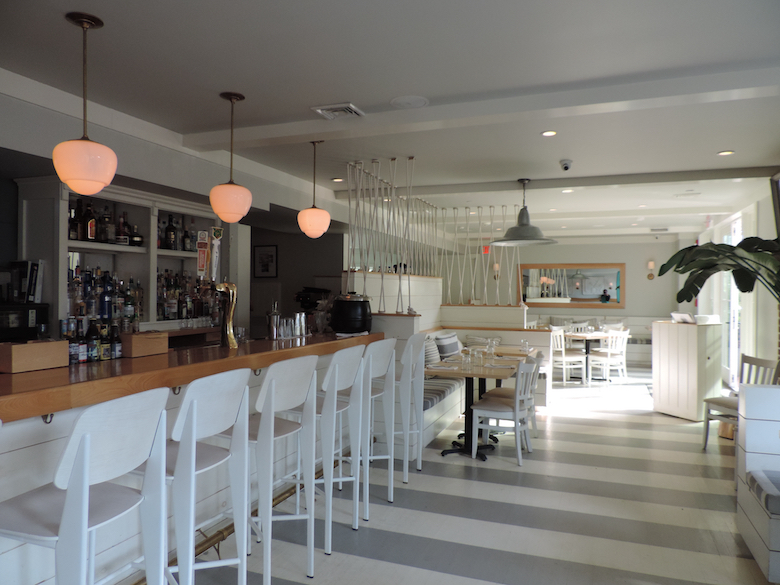 Artful restraint. You know it when you see it, like in the flourish of a paintbrush on canvas when the stroke ends suddenly; you feel it in the tense thrums of a cello at low volume. A power held just at bay, dammed implacably to release only just enough for you to handle.

It’s something I don’t think I’ll ever master in my effusive writing style, making it something I respect all the more when I see it — like when I visited American Beech in Greenport’s charming Stirling Square.

It was a bright, unseasonably warm fall day when I went to see what all of the buzz was about. Parking was scarce but not impossible in this maritime village, and I scored a spot behind the restaurant/boutique hotel with a prime view into the kitchen’s back door, where the enticing scent of brunch dishes cooking wafted out into the narrow street. Peering nosily through the screen door, I made my way to the courtyard entrance of the square, a hidden pocket of patio space on an otherwise typical Long Island village street.

Although I was running late, I had to stop to admire the space. A large outdoor bar delineated the space in the square that American Beech laid claim to. To the right, a fairy light-festooned pergola limned in green bamboo created a charming setting where glasses and silver clinked quietly in harmony with genteel laughter. It was a perfect vision of summer on the East End: tastefully rustic and poetically polite. 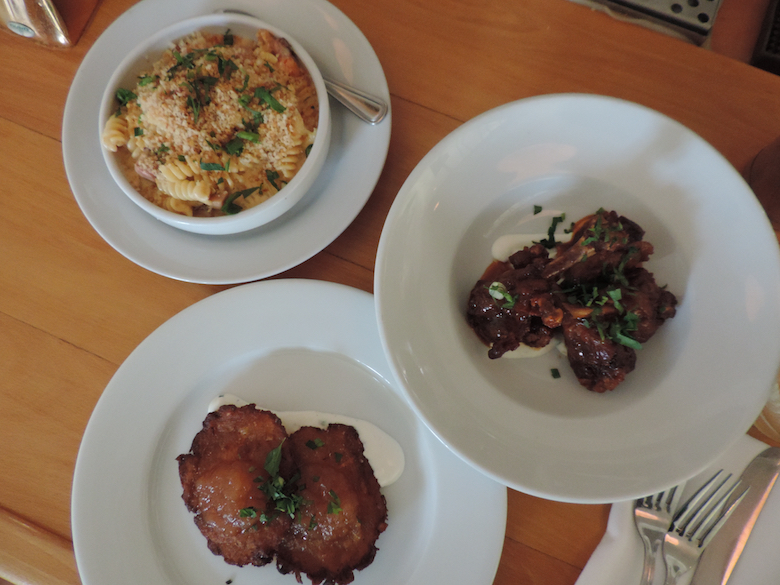 The interior was more of the same. Dolphin gray and stark white filled the space with brightness and light, the clean, coastal feel further defined by thick rope accents. There was neither too little nor too much of the theme—it was again just right, like the warm greeting I received from the hostess and the frothy cappuccino she made as I waited at the bar for the general manager, Iris Welcome.

Stately and impeccably refined, Iris herself unconsciously continued the theme of disciplined elegance as she gracefully slid into the seat next to me with a warm smile that reached her North Fork sky-blue eyes. A Peconic native and a 15-year veteran of the restaurant industry, she took over the stewardship of American Beech in May after Dennis McDermott moved on. For her, this role is like a full circle.

“I’ve been here since the restaurant opened last August,” she said, “but my father actually waited tables in this same space in the ‘70s.”

It was this space that so enchanted Brent Pelton, the owner, when he first visited the East End, and it inspired him to nostalgically retrace the food industry footsteps of his youth. Having grown up on an organic farm and winery on the bluffs of the Mississippi River in Iowa, the North Fork brought him back to those days—a far cry from his current profession in labor law in New York City. 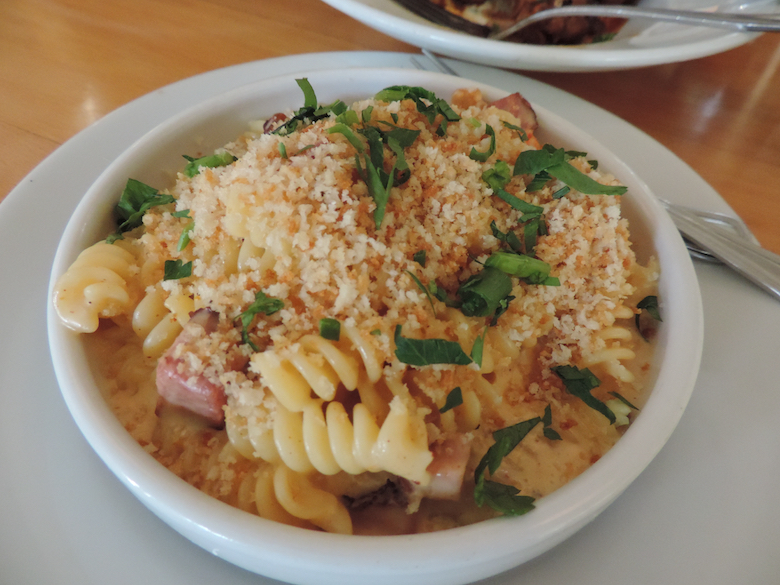 Needless to say, his staff is treated exceptionally well, which shows in the attentive service and care they show in their customers. Although Pelton’s vision is clear, his people are given a fair amount of autonomy, allowing them to flourish in a workplace that each of them are happy to report into. With an environment like that, it’s no wonder that the executive chef, Kyle Romeo, has been able to not only flourish but exceed all expectations.

One of the youngest executive chefs on the North Fork at just a tender 26, this fresh-faced, prodigious talent from Southold is yet another example of the artful restraint American Beech has perfected. He was loathe to brag about his experience at East End staples like the Jamesport Manor Inn, Stonewalls, Jedediah Hawkins, and North Fork Table and Inn — but quick to praise and thank the chefs he’s trained under and the staff that makes it all work. In fact, he credits his wife, pastry chef Amanda Falcone, with much of his inspired creations, as much as the seasons.

“We met working together at a place where we used to get farmers delivering produce right to the back door because of the nearby market,” Romeo said shyly. “I really loved that, so we bring that same kind of feeling to the menu here by trying new things all the time that are seasonally influenced.”

Welcome added, “We also pay a lot of attention to what our customers want. We have a lot of regulars, and they tell us, and visitors during tourist season are comfortable letting us know what they’re looking for as well.” The reasonable price points, consistently excellent service and laid-back but classy setting are among the highlights both groups agree upon.

But of course, it’s the food that unites them all. 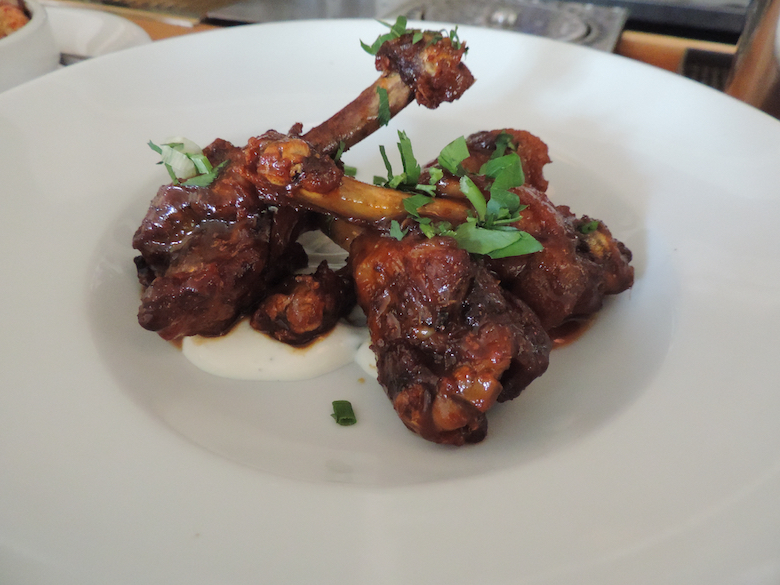 Romeo’s youth is perhaps the reason he dares to bring New American to even more inventive levels, but his execution belies a maturity that runs as deep and still as his humble presence. Things that can easily go overboard, like his mac and cheese with tasso ham, smoked gouda, and crawfish tails, tango on the tongue with just a hint of a sassy kick at the finish. Comfort food gets a makeover in renditions like the spaghetti squash latkes with thick applesauce and a gorgeous herbed crème fraiche. Duck wings from local Crescent Farms are draped exotically in passionfruit and tamarind, a combination that he somehow tames to a beautiful balance that is infinitely more nuanced than just sweet.

A burger with roasted garlic aioli (“Add the onion chutney,” Romeo said. Welcome added, “Eat it at the bar on Sundays for our burger and beer nights.”) on Tom Cat Bakery pretzel buns is popular, and the huge pork hind shank braised in Greenport porter are among the customer favorites. I, as a former Southern girl, was drawn to the buttermilk-marinated fried chicken—fried low and slow and kept light with a side salad as accompaniment—and the shrimp and grits, made with cream, cheddar, and coarse stone-ground grits. For vegans and vegetarians, curries and customization provide easy solutions. 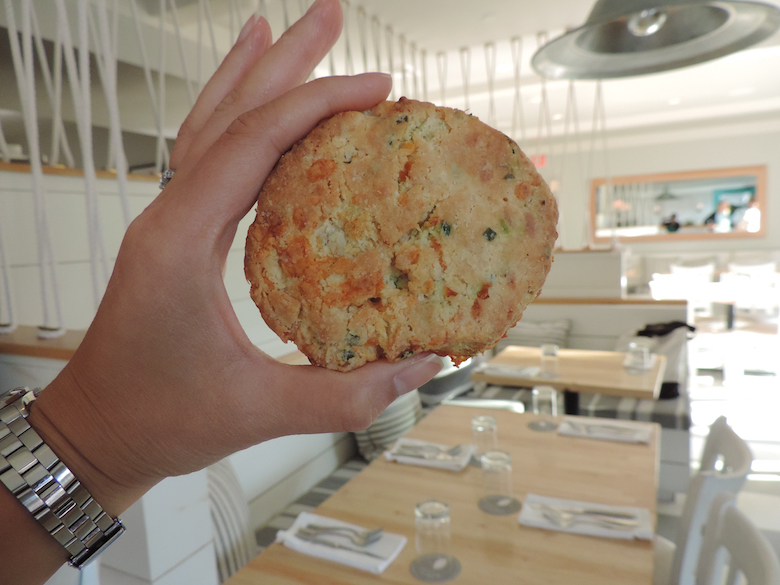 Brunch is no afterthought here either. Omelets are French-style, and even the cheddar and chive scones are elevated with minute touches. Crunchy on the outside and crumbly and buttery beneath, it’s touched with the slightest hint of sugar that makes the accompanying strawberry jam a genius touch.

It would have been so easy to let imagination get away from him, but no—he is somehow able to hold back and show us all just enough to become completely intrigued and eager to see what he and American Beech will be up to next.