Almond Zigmund’s Salon: Our Favorite Cure for the Winter Blues

Hibernation is overrated. Head out to Almond this winter for their Artists & Writers Nights. 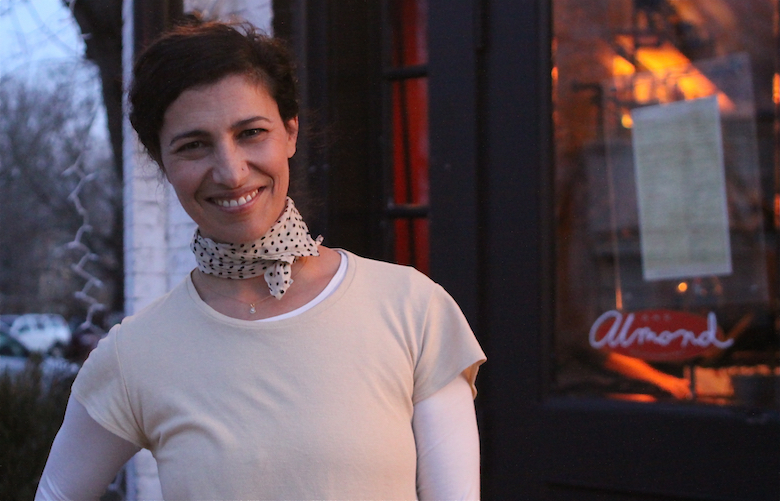 Almond Zigmund has re-invented the concept of the 18th century Salon when women like Mme. de Sévigné and Madame de Recamier held literary salons in their homes. A salon is a gathering of people under the roof of an inspiring host, held partly to amuse one another and partly to refine the taste and increase the knowledge of the participants.

On a recent (and frigid) January night, she hosted a full house at Almond in Bridgehampton. Her chef husband, Jason Weiner, regaled us with a delicious menu of grits and perfectly cooked monkfish with Marilee’s potatoes (if you don’t know who Marilee is, allow us to introduce you). Dessert was a chocolate & banana brioche pudding threaded with chocolate. Served family style on large platters, dinner is a sharing, communal event. For $48 you get a locovore dinner, a glass of wine or beer and an artist.

The artist on the menu on January 10th was Laurie Lambrecht, a photographer who placed large color copies of her work around the room. Lambrecht did a book of photos of Roy Lichtenstein, Lichtenstein In His Studio, with a forward by Dorothy Lichtenstein. Her photos of him working make the viewer feel as if he is in one of his paintings. Lambrecht also does portraits and art projects of stones and found objects. Most recently, Lambrecht was in a group show at the Southampton Arts Center “Water|Bodies” and last spring of 2016 she had a solo exhibition “Cyanotypes” at The Drawing Room, East Hampton.  At Almond, Lambrecht talked about her work between courses and finished with an art trivia quiz. A fun night.

Almond Zigmund was recently part of the Artists Choose Artists exhibit at the Parrish Art Museum and Roy Lichtenstein has two sculptures that mark the entrance to the museum on Montauk Highway.

Almond has hosted writers, artists such as Eric Fischl, video artists and musicians. Last year I participated in an open mic night that was wild and crazy. Almond has re-invented the salon concept to our local benefit. She has the depth and breadth of intellectual connections to stimulate us in the doldrums of winter.

Look for her next salon evening in February or March, but book early, Almond Zigmund can pack a house.

You’re in for a treat.