9 Things to Know in Food This Week

How will Trump’s labor secretary pick affect fast food workers? Read on to find out. 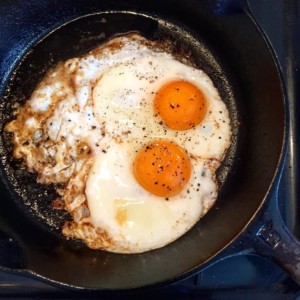 I’m taking a moment to thank the ladies in the coop who are back in business, laying the most perfect ?. Follow @EdibleEastEnd on Instagram.

From responses to Trump’s travel ban to a food desert in paradise, these are stories Edible editors are reading this week.

The Washington Post reports that Starbucks will hire 10,000 refugees over five years:
Starbucks CEO Howard Schultz added a coffee magnate’s voice to the chorus of tech industry executives who spoke out over the weekend against President Trump’s travel ban order, announcing plans for the coffee behemoth to hire 10,000 refugees over five years in 75 countries, initially focusing on those who served as interpreters or as support personnel for U.S. military.

The Wall Street Journal looks at how some suburban New York landlords are trying to woo renters with food:
Property owners in New York’s suburbs are investing heavily to remake bucolic corporate campuses built during the 1980s and 1990s, adding glass facades for natural light-filled offices and retail space for restaurants, cafes and, in at least one case, a supermarket with specialty services.

Scientific American reports on how to keep seafood sustainable—or if that’s possible:
“Where did all the fish go? We have consumed them. Nearly three billion people rely on fish as an important source of protein. The trend seems to be: eat the big fish. When these are depleted, eat smaller fish. When thees are gone, only the smallest edible fish will remain, and we will, out of necessity, eat them. Eventually, all of them.”

Fortune writes that Hungryroot has raised $7.7 million to make healthier food taste better:
“McKean doesn’t mince words — he is aggressively going after Big Food. The top 25 U.S. food and beverage companies have lost $18 billion in market share in the last five years. That trend is great news for McKean and his direct-to-consumer food business.”

Good tells us there are food deserts in paradise:
Nearly 2,500 miles from the nearest continent, America’s 50th state spends $2 to $3 billion a year importing 90 percent of its food and exporting 80 percent of its agricultural output. It wasn’t always this way. For centuries, islanders were proudly self-sufficient, thanks to abundant edible marine life along the coasts, rich volcanic soil, and an ideal tropical climate with a year-round growing season. But after the islands’ monarchy was overthrown in 1893, American-run pineapple and sugarcane plantations took over the bulk of viable farmland, sending their goods to the rest of the United States.

NPR looks at the effects Trump’s labor secretary pick would have on fast-food workers:
“But the nominee finds himself defending his outspoken objection to minimum wage increases, his calls for automation in the workplace, and his company’s record with regulators. Washington Democrat Patty Murray, the ranking member of the Senate committee holding Puzder’s hearing, criticized him for not submitting required paperwork.”

National Geographic has artist-made maps that show locations by what they consume:
“For their map of the United States (above), Hargreaves and Levin chose as their medium an assemblage of corn varieties and corn-derived products. And with good reason: Today no other country produces more of the crop, which made its way north from Mexico some 7,000 years ago and then—thanks to its high adaptability and versatility—proliferated.”

FoodTech Connect wonders what labels could do if they showed the true cost of food:
“Take a box of corn cereal for instance: The corn was likely grown in a monoculture sprayed with pesticides that can seep into groundwater and have harmful implications for farmworkers. Using petroleum-based fertilizers to increase yield just bolsters our appetite for fossil fuels. The price of that corn is even cheaper when you consider the heavy government subsidies to promote corn production.”

At Paste a look at how, to run a restaurant under inflation in Argentina:
“So is absorbing costs and cutting profits the only way to thrive in this economy? If you walk down the cobblestone streets outside of Puerta Roja or Banco Rojo on a Friday night, the line of customers waiting for an inventive burger or a craft beer would suggest so.”