Potter Chris Fanjul finds his niche on the East End. 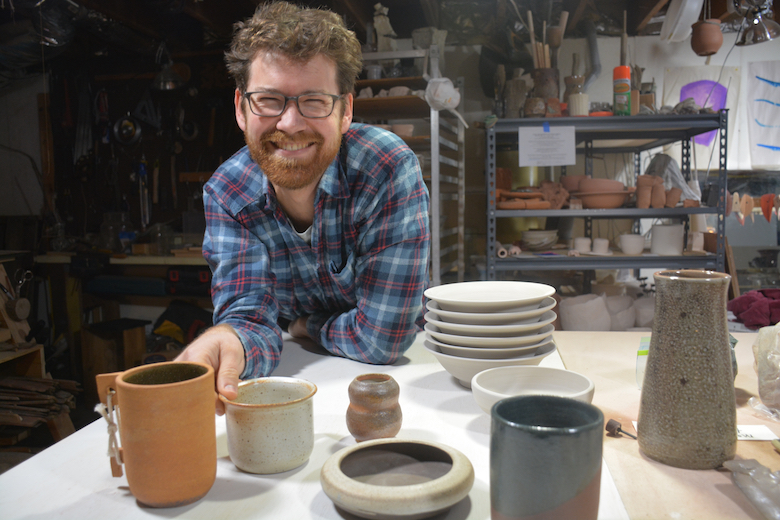 “I came out to work in the wine industry,” he said. “I’d worked for the Museum of Natural History, a wine shop, a cookbook store and a fashion photographer, so I didn’t know if I wanted to be in art or food and wine.”

“I had a decent palate and thought I was going to be a winemaker,” he said, laughing. “I thought I could learn it all and start my own vineyard.”

But after three years Mr. Fanjul realized that it wasn’t going to happen and looked for a new direction, taking classes at the French Culinary Institute, working in the Jamesport kitchen of Jedediah Hawkins Inn & Restaurant and bartending at North Fork Table and Inn in Southold. When none of those took hold, he returned to the wine world as tasting room manager at Anthony Nappa’s Winemaker’s Studio in Peconic.

“I worked there while I figured out what I wanted to do,” he said. “While this wasn’t going to be my career, I liked being able to open up people’s minds to wine.” 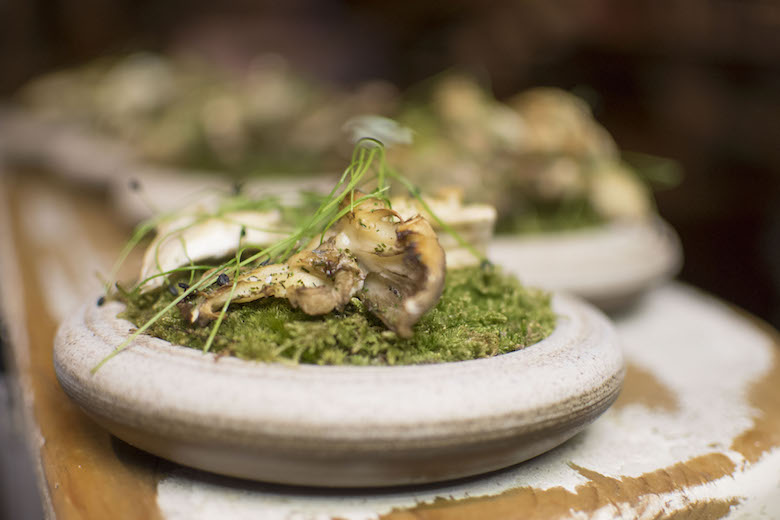 As Mr. Fanjul searched for his calling, he knew he wanted to stay on the North Fork and met some key people during this time, including his wife, illustrator Corey Solinger and chef Taylor Knapp, at the now defunct Luce & Hawkins restaurant.

“I was feeling creative, because winemaking is creative,” Mr. Fanjul said. “But I wanted to get my hands dirty, I wanted to make something, which is why I wanted to be a chef and then a bartender, you’re always making something.”

A ceramics class, given to him by his wife as a wedding gift, helped to spark that creativity, literally, as the medium finally ignited a passion in the anthropology major.

“Some people love to cook, we’ve been making wine for thousands of years, that’s how I got drawn to that field,” he said. “This clicked with every aspect of my life, it’s ancient, it’s making something and it can be connected to food and wine.”

Mr. Fanjul began taking classes at Brickhouse Ceramic Art Center in Long Island City, which led him to artist Nancy Robbins, a founder of the Clay Art Guild of the Hamptons.

Created in 2001, the Clay Art Guild offers classes and workshops for adults and children, as well as exhibits showcasing ceramic artists.

“We wanted a space to exhibit fine ceramic art and share ideas and techniques,” Ms. Robbins said. “The large gas kiln in Water Mill originally brought us together.”

Mr. Fanjul spent the next two years working for Ms. Robbins, learning different techniques and developing his own style. 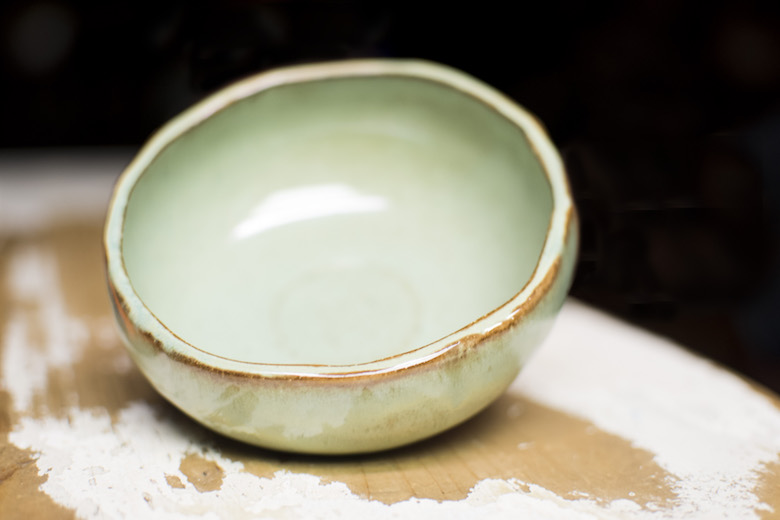 Working for Ms. Robbins, a glaze chemist, who has worked for the Metropolitan Museum of Art, gave Mr. Fanjul plenty of exposure to different glazes, but he soon found himself moving in another direction.

“Having learned from someone who is so glaze-oriented, I’m more fascinated with the raw texture of clay, ” he said.

Currently Mr. Fanjul has two pottery wheels in his basement and a salt kiln in his backyard. He admits to identifying with more ancient techniques of pottery making and natural glazes.

“Historically, when we first started glazing pottery, it was by accident,” he explained. “You stuck a piece of clay in a wood burning kiln and the wood ash became the glaze. It fused with the clay when it reached a certain temperature.”

Along with traditional wood firing, Mr. Fanjul is also working with salt glazing.

“Salt glaze doesn’t take as much time as ash,” he said. “Salt in a wood kiln vaporizes and the sodium fuses with materials in the clay, making a glaze.”

Other mediums Mr. Fanjul incorporates into his creations include rope, as handles for some of his mugs and wood for candle holders. 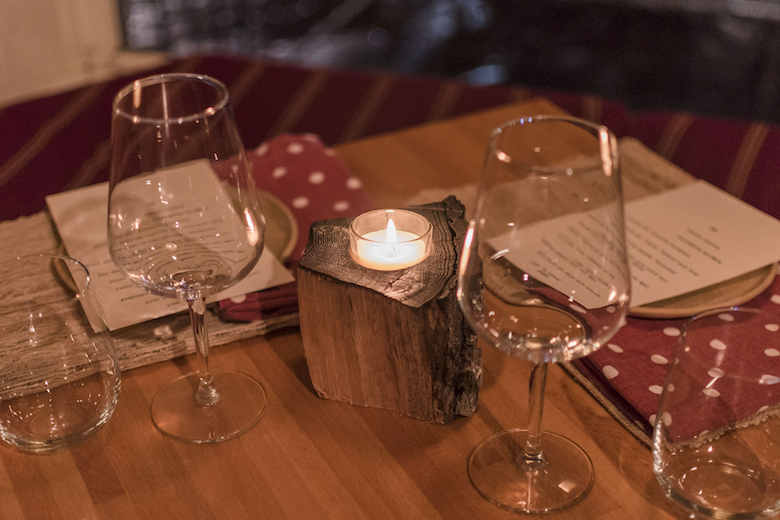 During this time he also partnered with his wife to write a children’s book, “CJ Builds a Treehouse”, that was illustrated by Ms. Solinger.

“What’s nice about the way Taylor operates is he’s doing a tasting menu and wants people to pay attention to what’s on the plate, so he wants it to be a little different,” Mr. Fanjul said.

The first item Mr. Fanjul made for PawPaw was a shallow bowl that turned out to be a fluke.

“I made it just for fun and then wondered what can I do with this?,” he said. “I went out to my backyard and put some moss on it. Now Taylor studied at Noma in Denmark, considered one of the best restaurants in the world, where chef Rene Redzepi is using pieces of seaweed, bark and needles.”

Another item Mr. Fanjul made for PawPaw, a plate accidentally left out in the rain, was so popular, he ended up making more.

“It got pockmarked from the rain, then I glazed it and it cracked all over the place, but held together,” Mr. Fanjul said. “He (Knapp) put these leaves on them that had been dipped in a powder and it looked like an alien planet, so it takes the diner to another place.” 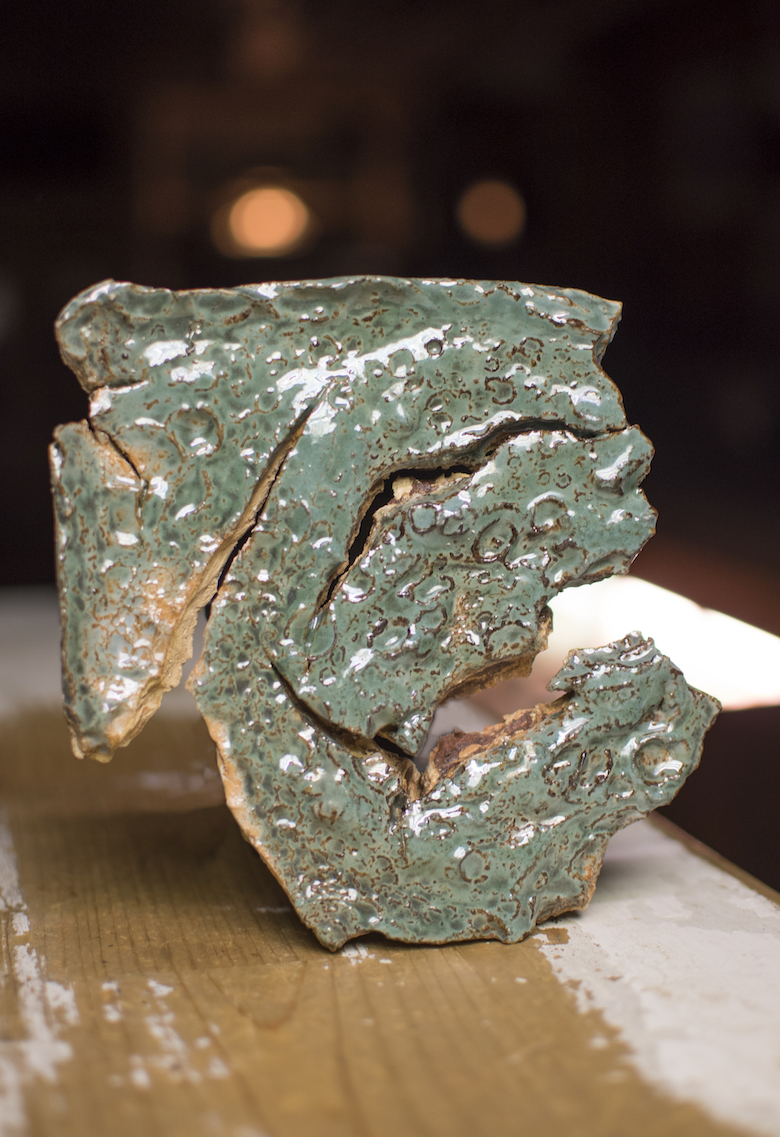 The creative partnership between Mr. Fanjul’s dishes and Mr. Knapp’s food continues to be an epicurean match made in heaven. Mr. Fanjul has made bread plates, a set of bowls and a complete coffee service for PawPaw. He’s currently working on dinner plates with a salt finish and wooden candle votives.

“Chris does a really good job incorporating natural elements, using local items,” Mr. Knapp said. “Our coffee cups have a little bit of local sand in them and the bread plates include local clay.”

“The last brick companies out here closed in the 1930s,” he explained. “I find bricks interesting, they’re lumps of clay that we think of as industrial, but they were handmade, so they are in a way crafted.”

For now Mr. Fanjul is only experimenting with brickmaking, as the process of collecting and cleaning locally sourced clay is very labor intensive. He’s currently working on a glaze made from crushed oyster shells from Montauk and hopes one day to make all of his products from local clays and glazes.

“I didn’t think I was going to be an artist,” he said. “I now feel that I’m moving in that direction, but I’m home schooling myself, which is a slow process.”

To find Chris Fanjul’s work or to order a copy of “CJ Builds a Treehouse”, go to chrisfanjul.com. For see more of Katelyn Knapp’s photography, go to katelynknapp.com.