Can CSAs Save Our Planet? A Look at Hamlet Organic Garden in Brookhaven

Now more than ever, you need to know your farmer. Start with Sean Pilger. 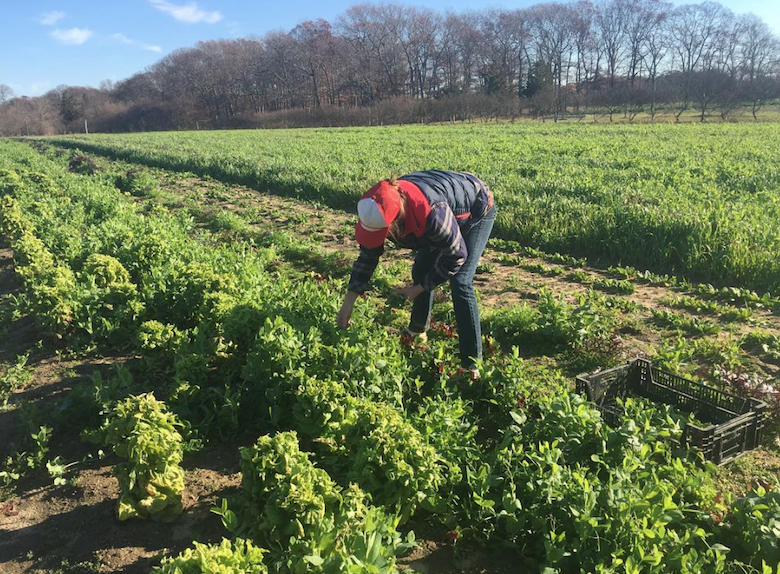 Hamlet Organic Garden is in the business of feeding people. I am one of those people. Set on 15 acres of fertile land in sleepy Brookhaven Hamlet, Hamlet Organic Garden, or HOG as it is known for short, grows food for its neighbors. Local residents buy a share of the produce through a community service agriculture project, receiving a weekly selection of freshly picked vegetables from farmers they know and that hasn’t been travelled a few thousand miles before reaching their plate.

When I first heard about HOG, eating locally grown produce had been on my to do list for a while. Every day, over 100 million tons of carbon get pumped into the atmosphere, enough to fill Metlife Stadium—where both the New York Giants and Jets play football—thirty thousand times over, and then some. I diligently turn off lights when I leave a room, put a jumper on when I’m cold rather than turn the heating up, and walk the 1-mile to our local shop for fresh bread on a Saturday morning. Yet, without batting an eye, I will sit down to eat a meal whose vegetables have collectively travelled fifteen to twenty thousand miles before landing on my plate. Data shows that nearly one third of greenhouse gas emissions come from growing, packaging, and transporting food; turning off a couple of lights in my house does little to reduce that.

My excuse for not cooking local food was that it isn’t practical—the only New York grown options in our closest grocery store are potatoes and apples, which on their own would get tedious very quickly. They also aren’t life-sustaining. I would occasionally stop at a farm stand on my way home from work to pick up some herbs or a lettuce, and I grow my own tomatoes, but my weekly shop centered on the grocery store with its avocados from Mexico (2500 miles away), cucumbers from California (3000 miles away), and bananas from Costa Rica (4100 miles away).

Then two summers ago, my boss invited me to HOG’s yearly strawberry festival, an afternoon of live music, BBQ-grilled veggies, community mingling, and of course, juicy, ripe, ruby red strawberries picked straight from the field. Here was a farm less than 3 miles from my doorstep growing 300 different varieties of vegetables. Eating only locally grown produce, I realized, might be possible after all.  I took the plunge, signing myself up for a share.

HOG is currently run by  Sean Pilger, who took over the farm in 2006 after getting a phone call from the previous manager who was looking to step down.  Pilger had been learning the ropes of community driven agriculture apprenticing at farms in Massachusetts and then Seattle, but wanted to return home—he grew up in Brookhaven—and run his own place.

“I like being outdoors,” said Pilger when I asked him why he enjoys farming. “Hand me a bag of seeds and I can play around all day.” It’s also about social responsibility and feeding the community with minimal impact on the ecosystem. “The farm is part art project, part nature reserve,” said Pilger.

A significant portion of the farm’s income comes from its 180 members, like me, who “subscribe” at the beginning of the season, paying up front for a share of the produce. This gives the farm the money it needs to buy seeds, fix fences, and pay wages without taking out loans. Members share both the risks—crop failure, disease, bad weather—and the benefits—a direct relationship with the farmer and a weekly selection of fresh, ripe vegetables. HOG isn’t the only farm in Long Island that supplies locals with food through a CSA. I’ve found at least 20 others in Suffolk and Nassau counties.

“Basically we grow anything that works in the climate,” says Pilger.

At HOG the share starts in May with a selection of leaves; crunchy lettuce, tangy arugula, crisp spinach and peppery kale. My husband isn’t a fan of salads but pasta with arugula pesto and eggs Florentine went down a treat. As the season went on, substance was added to the greens with sweet hakurei turnips—these are great sautéed in butter—and crunchy sugar snap peas. The end of June brought onions, carrots and garlic; we happily ate bulb after bulb roasted in the oven and then spread on bread. The beginning of summer also coincided with—what felt like—a non-stop supply of summer squash, which looks like a zucchini but is yellow. I packed it in quiches and sautéed it in olive oil, but we couldn’t keep up (I ended up palming some off on the neighbors).

As the summer rolled on our bags got heavier still with white and red striped beets, buttery potatoes and then in August the sweetest most flavorful tomatoes I have ever tasted. Our first share of tomatoes—a pint of yellow, orange, and pink cherry tomatoes—never made it home. Popping one into my mouth to “just try it,” as I jumped into the car after picking up our share, the others disappeared in quick succession on my three-minute drive home. One week our share contained 5 pounds of dodgeball-sized tomatoes, which we cooked up into sauce and canned for the winter months.

I asked Pilger how he decides what vegetables to grow each year. “Basically we grow anything that works in the climate,” was his response, and varieties that people will eat. It turns out that, unlike me, not every member takes their whole share each week. If something gets left behind too often Pilger and his “hardworking crew” of six—Cristina Cosentino, Steve Hilles, Helena Ludrosky, Lauren Napoli, Elliot Peper, and Daniel Pettus—scrap it in favor of a vegetable everyone will enjoy more. I put in my request for more beans and less summer squash. Apparently the woodchucks, or groundhogs, ate all of this year’s soybeans. Next year the farm plans to get a dog to act as a deterrent, so fingers crossed the bean crops will be plentiful.

Taste isn’t the only reason for slashing varieties from the farm’s list. HOG used to grow thick-stemmed, dark green broccoli (the kind you can buy in the store), but more that half of it would end up getting moldy before it was ready to be picked. “A ton of it was diseased,” said Pilger. Since then, he  has switched to a sprouting variety that shoots out stems almost as fast as they can be picked. The new variety is healthy, produces stalks like crazy, and tastes better. It’s a win-win for the farm—and for us.