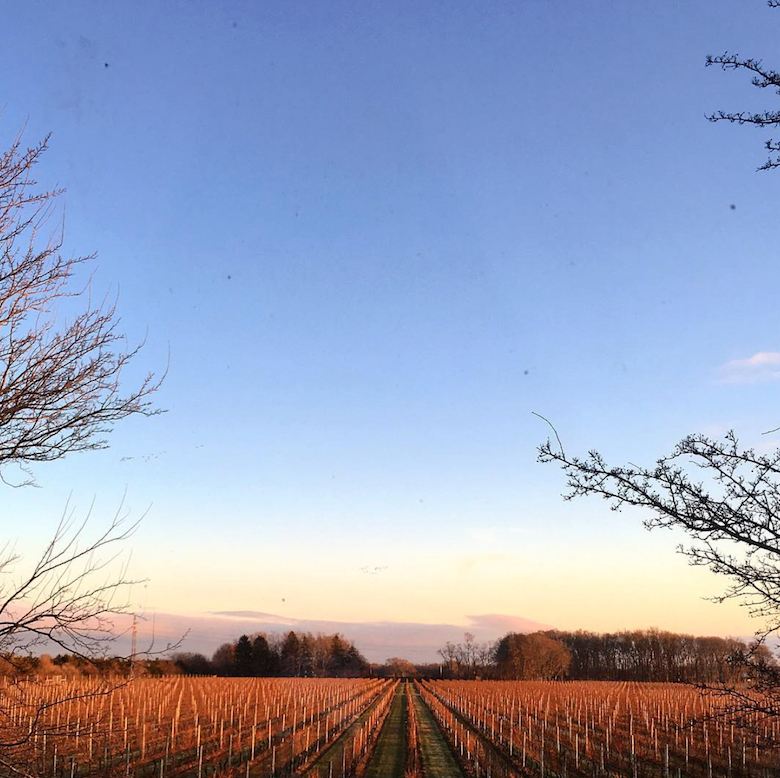 There’s been an under-the-radar change on 28 acres off Oregon Road. A vineyard, planted mostly to merlot and chardonnay once known as the Sherwood House, has changed to hands that are bringing a new perspective with respect to the past. Alexander Rosanelli and his uncle, Alfredo Apolloni, have bought the land and are now the owners of the rechristened Hound’s Tree Vineyards. Rosanelli, a frequent visitor to the East End, also spent many summers with Apolloni, who owns and runs Apolloni Vineyards in the Willamette Valley, where pinot noir is king.

“I talk to him at least three times a week,” says Rosanelli, who splits his time between New York City and the farmhouse on the vineyard that he shares with his husband, Ben.

Where Rosanelli, who is lead winemaker for the new label, relies on his uncle’s years of experience in a winery, he also looks to the expertise of Gilles Martin, winemaker for Sherwood House, who intimately knows the vineyard and what Long Island can produce.

The vineyard changed hands not long after the founder of Sherwood House, Charles Smithen, died in 2015. The vintage was already underway, so 2015 is the first for Hound’s Tree. Sherwood House, and its sister label, Oregon Road, will live on as brands with Martin as winemaker and the involvement of Smithen’s son, Kevin.

The grapes for each label grow side by side and the wines are available together in the Sherwood House tasting room on the Main Road in Jamesport.

The tasting room also holds a gallery and in December wine club members and guests were treated to a dinner paired with older vintage of Sherwood House and an introduction to Hound’s Tree. Sherwood House will maintain Martin’s Gallic style with elegant chardonnays and merlots that take advantage of the East End’s maritime climate and a judicious use of oak that makes a robust yet elegant food friendly wine. On the menu that night were the 2000 and 2010 Sherwood House Estate Chardonnay. The 2000 showed the flavors of aged wine—nutty with orange marmalade—but with bright acid keeping it lively. The 2010 is hitting its stride with rich ripe flavors from start to finish, and enough weight to make it serious.

Hound’s Tree wines will be more contemporary, says Rosanelli, who is forever adding to his education. “I can’t think of the last time I read a book that wasn’t about wine,” he says, adding that the latest is on North American pinot noirs, which he intends to graft onto current vines in the spring. The idea is to use techniques from Apolloni Vineyards to make the pinot noir, which is known to be difficult to grow.  “At the end of the day it’s not rocket science,” he says. “But it is nuanced.”

Hound’s Tree is another name for a dogwood tree, which is known for its hard, polishable wood. Rosanelli was charmed by the name.

He also learned a lot from the tasting of back vintages of Sherwood House at the dinner. “It’s an interesting perspective to have, when thinking about the winemaking going forward,” he says. To finish the meal guests were served a glass of the Sherwood House brandy and taste a Hound’s Tree Reserve blend from the barrel. This wine had followed two vintages of Sherwood Manor, their red blend, from 2008 and 2010. “These are wines you want to go back to,” said Martin as he poured them. “There’s quality, and the distinction of the specific flavors of the estate.”

Rosanelli nodded. “I’m ready to experiment,” he says. “Winemaking is a lot of trials, where we taste different techniques, yeasts, fermentations next to each other to see what’s best. But I like it; I’m experimentally minded.”