Love or hate the Obama administration, you have to admit Michelle Obama made one great—and refreshingly food-conscious—First Lady. 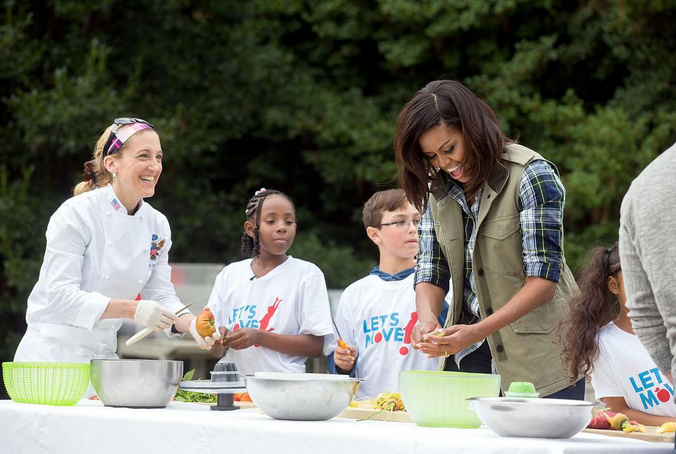 Love or hate the Obama Administration and the policies enacted in the past years, there is little doubt that Michelle Obama will go down in history as one of the most beloved and even coolest First Ladies. From her clothes to her smarts to her arms to her mom skills to her love of food to her karaoke moves, she became a cultural icon while taking the role of First Lady to a whole new level. As we prepare to say goodbye to her as First Lady, we take a look at five of her unforgettable food moments.

When She Took Farm-to-Table to Home Garden-to-Table

Students from around the country that participate in #LetsMove programs joined the First Lady to help her harvest last week, including harvesting her favorite fall vegetable: sweet potatoes.

Planting an organic garden on the South Lawn in 2009, Michelle Obama put local food center stage. During the past seven years that garden has been the backdrop for everything from meetings with world leaders to plantings with schoolkids. The First Lady secured the future of the garden, cementing it so it can’t easily be removed and raising $2.5 million in private funding for the National Park Service to maintain its upkeep.

That Time She Turned Up With a Turnip

Redefining what it means to “turn up,” Michelle Obama dropped some beats, advocated for vegetables and a priceless vine all at the same time.

When She Ordered French Fries at Buckingham Palace

Proving she’s not perfect, the First Lady admitted she has love of French fries and even ordered some while visiting Buckingham Palace.

That Time She Went on Sesame Street

From state dinners with world leaders to Muppets, Michelle Obama can hang with any crowd. The First Lady made several appearances on Sesame Street, including one where she taught Grover the importance of eating a healthy breakfast.

When She Changed School Lunches

She made fighting childhood obesity a focal point of her time as First Lady. In 2010 she helped to successfully pass the Healthy Hunger Free Kids Act, which allowed the USDA to change school lunch and breakfast programs for the first time in 30 years.  While some of the changes have been controversial the act has made all pay more attention to childhood nutrition.