What are we drinking New Year’s Eve? Champagne Showers from Moustache Brewing Co. 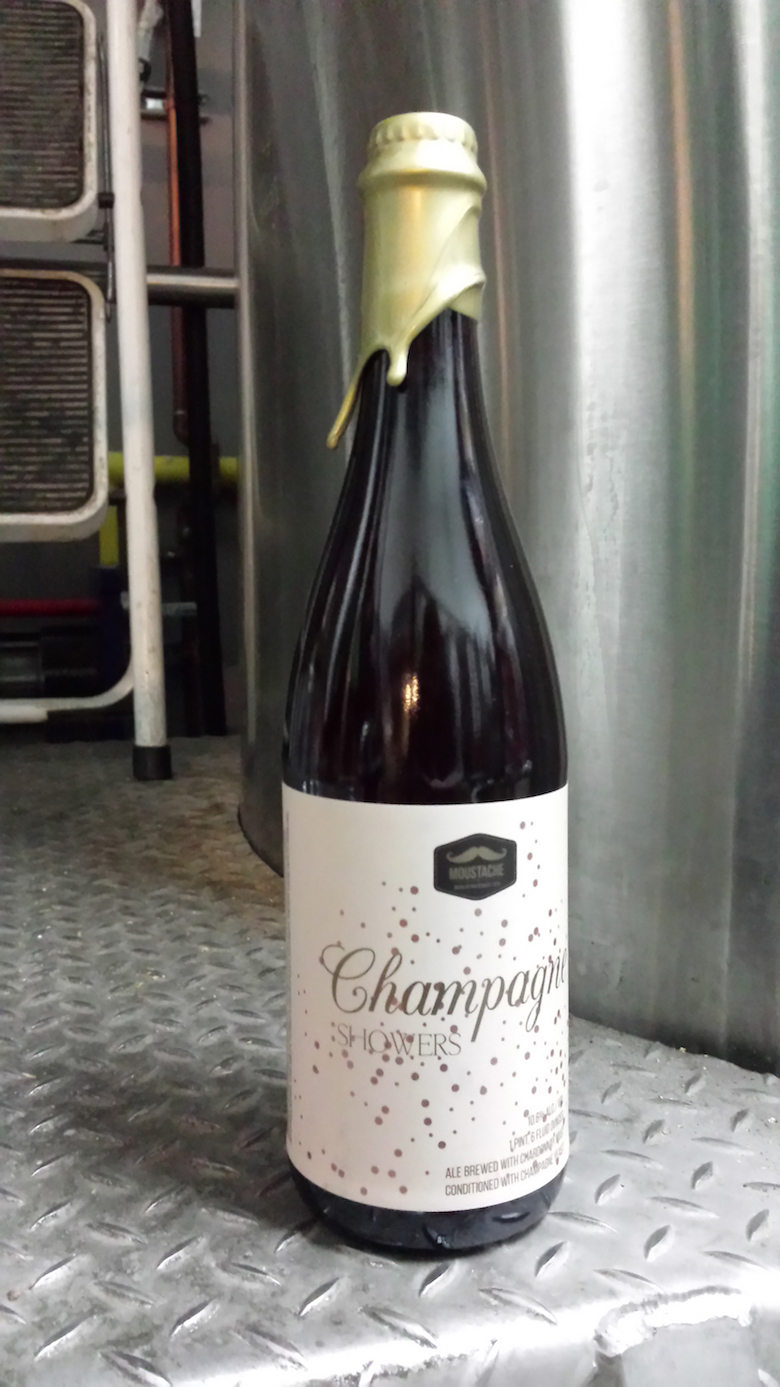 It’s an unseasonably warm November afternoon, the sun setting early and casting long shadows into the tasting room of Moustache Brewing Co., when I meet up with Matthew Spitz who has a new beer for me to try. This is my first exclusive, and it’s from one of my favorite breweries. How I got here isn’t important, but how Moustache got here is: through hard work, managing tight spaces and making damn good beer. Before we can sit down to talk, Matt has to play pallet Tetris to fit inventory amongst the brew tanks.

Matt, the co-owner and head brewer of Moustache along with his wife, Lauri, is introducing a new beer this week: Champagne Showers, a golden ale brewed with chardonnay juice, or “must” to those in the brewing and winemaking industry. The chardonnay must is from the North Fork of Long Island, part of a community that begins in Riverhead, where Moustache has its brewing facility and tasting room, to the tip of Orient Point, known mostly for its ferry to Connecticut. But in between there is a distillery, a few more breweries and many wineries.

“Being on the North Fork and kind of being in the winemaking community out here, we have a lot of friends who are winemakers, and we used them as inspiration,” Matt says.

Matt pours two glasses of chilled Champagne Showers and hands one to me. I’m excited. I’m one of the first people to try it besides the brewers. The tiny, sparkling bubbles tickle my tongue. It’s dry and flavorful. I’m almost suspicious when I tell Matt how much this reminds me of a sparkling wine. This is going to be perfect for the holidays.

“It was our intent to be popping [these] bottles on New Year’s [Eve],” says Matt.

Champagne Showers starts as a blend of the must and beer malt, fermented together with American ale yeast and then conditioned in the fermenter with Champagne yeast. The Champagne yeast gives the beer a drier taste. When poured, the golden beer sends up the classic tiny bubbles of a traditional sparkling wine. I ask Matt his initial opinion.

“It’s really hard to have an objective view,” he says. “I know exactly what went in to this.”

But if he were to raise a critical point, he says, this is it: “It doesn’t pour like Champagne does. I really wanted the bubbles to come through and have a nice head. [But still] I’m happy with it. I may have some other ideas now, but as first run, I am happy with it, for sure.”

I’m excruciatingly happy to try it. It’s marvelously easy to drink, but one must be mindful of its 10.6 percent ABV, close enough to an actual bottle of Champagne. Some wonderful alchemy went into this beer. The grapes don’t overpower the beer, and the beer melds delightfully with the must.

“My goal was to really showcase the grapes,” says Matt, “and not obscure it with a complex malt bill or hop bill or dry hopping it.”

And Champagne Showers does indeed showcase the chardonnay grapes.

But why the name? “Are you familiar with the pop group, LMFAO?” Matt asks. “So they have a song called ‘Champagne Showers.’ We celebrate their entire catalog,” he laughs. “On days and nights when we need to buckle down and work, we have it blasting in here, like when we were filling bottles last night.”

Champagne Showers was announced on both Moustache’s own website and on Facebook. Matt and Lauri are very good with keeping us informed via social media. There’s a refreshing transparency that I’ve found remarkable, from Moustache’s Kickstarter four and a half years ago to the opening of the brewery and tasting room two and a half ago and even to the Society for Fine Liquid Provisions, the membership club that was positioned as a way to inject money into the brewery to buy larger tanks.

“We’re trying to keep people involved,” says Matt. “[We want] people feel like they’re a part of it.”

On Friday, November 25, bottles of Champagne Showers began being sold at Moustache’s tasting room in Riverhead and have now made their way to beer distributors throughout Long Island. As a scrappy young brewery, the folks at Moustache deliver the beer themselves, just another indication of the hard work and determination they have to get their beer into our hands all across southern New York. I ask Matt if it surprises him that his brewery grew quickly to meet the rising demand. He says, “One thing we’ve learned throughout the entire process of opening a brewery is how to be flexible.” Flexible enough to answer my questions, no doubt, but it occurs to me that I’m taking Matt away from the dozens of chores he has to do to keep his business running effectively. I wouldn’t be responsible for any more delays. He’s got more beer to make.