What Shines Brightest During the Festival of Lights? Latkes

Love latkes? We got your back. 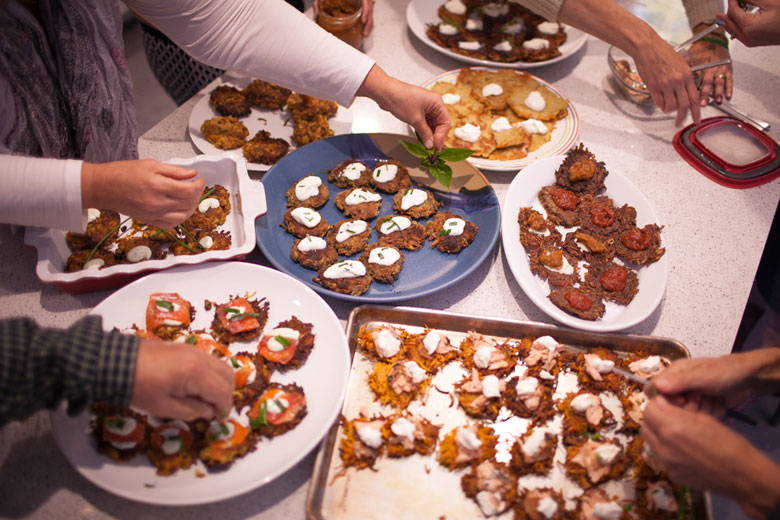 Chanukah is the Jewish holiday of fried foods. Traditionally, potato pancakes, aka “latkes,” and deep-fried doughnuts share the marquee. As the world turns, though, we’re seeing many variations on the theme.

Since pancakes are so easy to make, they’re a popular party supper on the first, second, or all eight nights of Chanukah (though they can be made any day of the week—or, for that matter, all year ’round). The basic recipe is just grated or finely shredded potatoes, onions, matzo meal or flour, eggs, salt and pepper; sometimes potato starch, too.

In the “olden days,” grandmas from Central Europe to Canada washed and peeled potatoes for a crowd, with the willing hands of their daughters and granddaughters. Men were not allowed in the kitchen. Not-so-willing hands grated the potatoes on a box grater, one hand holding the worn green bar handle to keep the tin utensil steady, while the other rubbed the potato down to a nub. The standing joke was that potato “latkes” (pronounced ‘lot-kuh’ or ‘lot-kee’) weren’t latkes without some knuckle in them. Now we have food processors to grate or shred the potatoes, and we use Long Island Yukon Gold potatoes that just need to be scrubbed, not peeled, for the batter.

Since local root vegetables are so sweet this time of the year, carrots, butternut squash, turnips and parsnips may find their way in with the potatoes. Goose or duck fat, stored from Thanksgiving dinner, adds delectable flavor to the frying oil, if you’re lucky; but chicken fat (“schmaltz” actually applies to any rendered fat) is usually available in local grocery store freezers. Latkes fried in plain oil are a bit bland.

Note: You’ll probably have to double or triple this recipe for more than 3-4 people.

For more latke recipes, check out the 8 Days of Latkes in our archives.