Celebrating the Feast of Our Lady of Guadalupe in Southampton

On December 12, Southampton saw a miraculous joint effort in tamale-making to celebrate another miracle: the story behind the Feast of our Lady of Guadalupe. 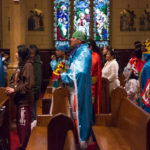 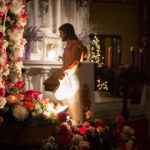 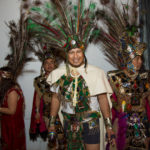 Dressed in traditional costume, Mexicans celebrate their heritage and march in a procession. 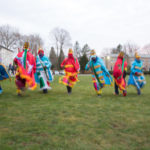 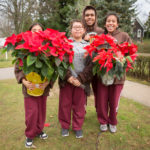 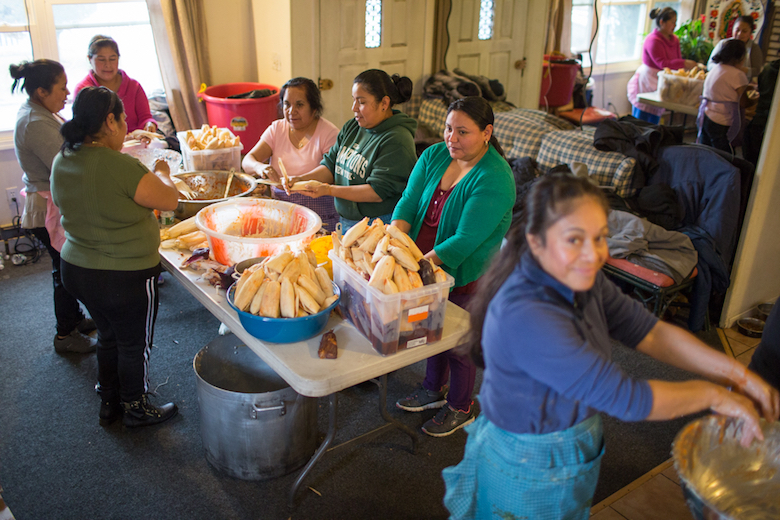 Women from Puebla, Mexico prepare tamales as an offering at the annual Virgin de Guadalupe celebration.

Twenty women from Puebla, Mexico took turns preparing 800 tamales in a modest Southampton house on December 12, the Feast of Our Lady of Guadalupe, which celebrates the miraculous apparition of the Virgin Mary to an indigenous man, Juan Diego, on Tepeyac Hill in 1531.

On the same a hillside, not far from Puebla, the Basilica of Our Lady Guadalupe shrine accepts over 20 million pilgrims a year. The 500-year-old tradition has been celebrated on the East End for the past 17 years, with marathons, blessings, processions, Aztec dress, dancing, music, and tamales. 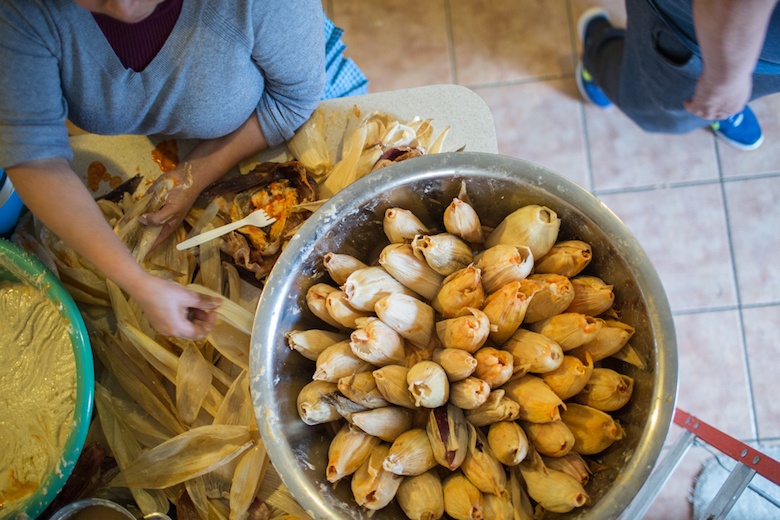 The women start food preparations the day before. Corn husks were soaked in water to make them pliable. Dried chili peppers were boiled in water. Fresh tomatoes, cumin seeds and salt were added to the spicy water and everything was blended into a smooth salsa. Pork is braised and shredded into chunks.

The real work begins, and ends, on December 12. 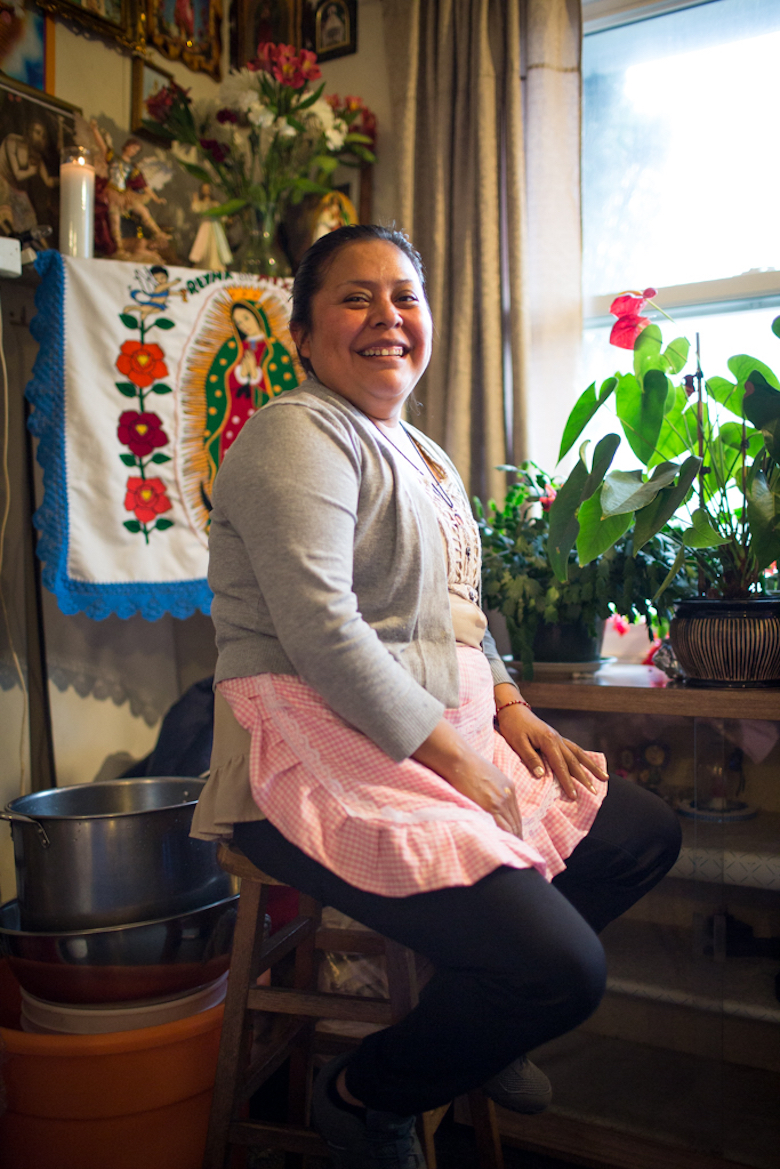 Masa, a thin dough made from Maseca corn flour, pork fat and water is mixed in a galvanized steel tub. The tub sits on cardboard on the dining room floor and is used to replenish bowls on the kitchen and dining room tables.

Corn leaves are stuffed between an assortment of vessels. Blue buckets filled with red salsa, stainless steel bowls of masa, meat, and pots of water to rinse hands. 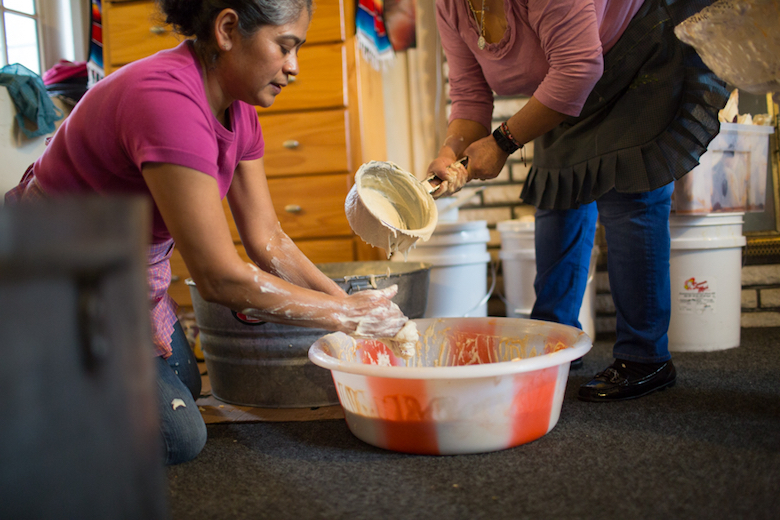 The women work in unison. First, they cup a husk into the palm of their left hand. With the right hand, they scoop the masa up, and paint the inside of the leaves, thick. A chunk of meat  is placed in the middle and the motion is repeated using the hot sauce, then again with masa.

The women’s hands move as if playing a musical instrument. The motion is fluid. The smell is comforting. The sound is laughter. 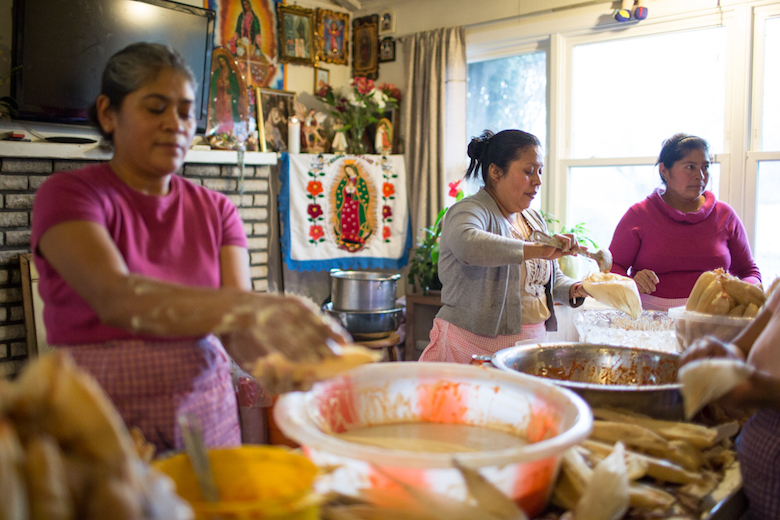 Once the ingredients are laid to rest, the husk is buttoned up like a double breasted suit. The leaf is folded up, adding another layer of protection and placed, one-by-one, crease-side down, in a bowl. The circular result reminds me of the center of a sunflower.

The container full of yellow and purple tamales are handed off to two women in charge of cooking. “Not easy,” Maria Zamurano said, of making the perfect tamale.

Things are going pretty smoothly with Zamurano and her mother-in-law, Margarita Zamurano. They watch over three aluminum pots, each holding 100 steaming tamales, perched on top of gas burners in a garage off the kitchen. 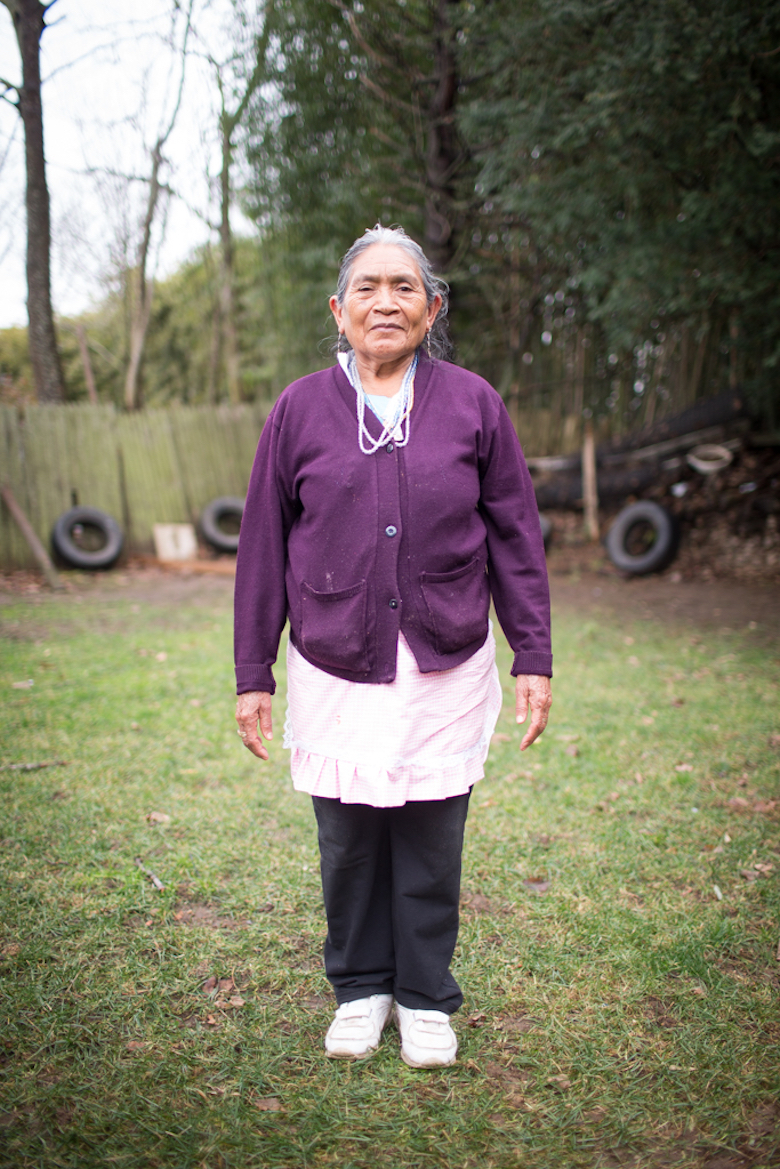 Although the elder Zamurano is silent, her clothes speak volumes. She wears lots of colorful beaded necklaces, long sparkling earrings. a waist-length braid, a purple cardigan, pink gingham half apron and white sneakers.

The younger woman carefully transfers the corn envelopes to a strainer above some water. they tuck a red cotton towel over the rounded tamale hill. A kitchen bag is placed over that and as the heat builds, the white plastic rises like a puff pastry. It takes two hours or more for the tamales to cook. 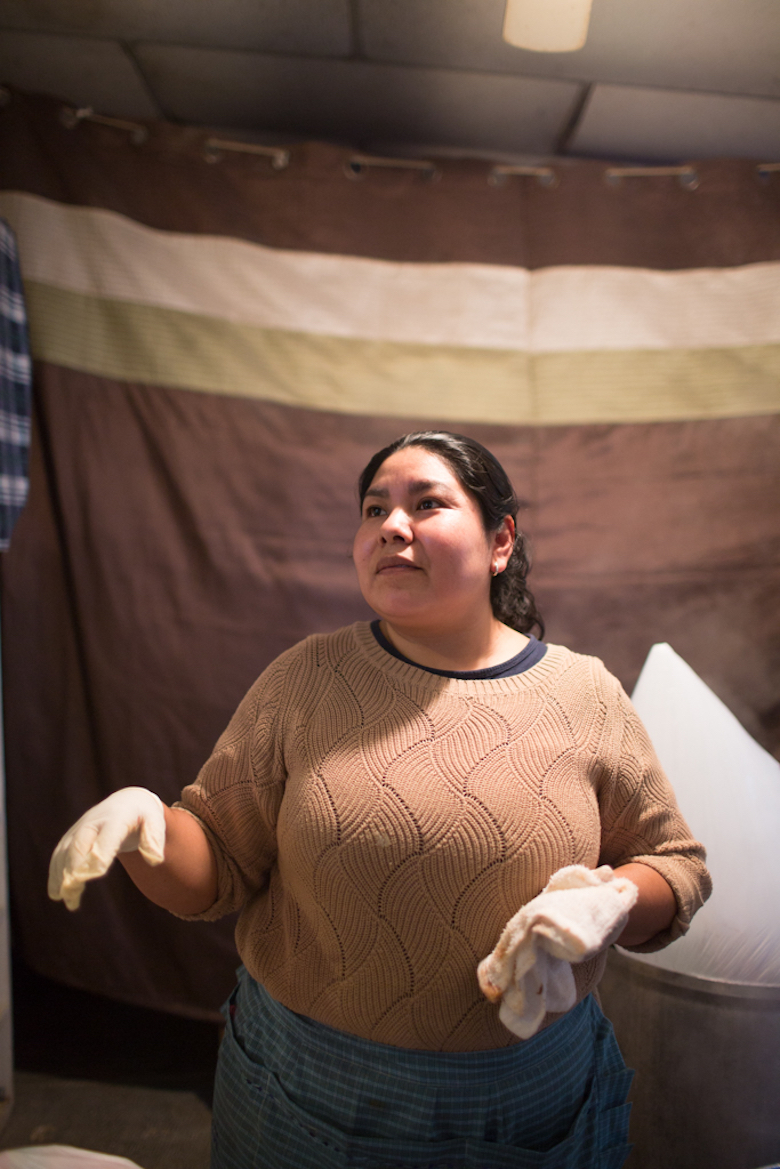 When a pot is done, two men pluck the hot pan off a stove and replace it with another.

The owner of the house, “Chica Mama,” orchestrates the show, at one point gathering everyone for a group photograph in the backyard. Some are more shy than others.

“Mucho frio,” they replied in unison.

Back to the warmth of the kitchen, Zamurano turns the heat up on the tamales. “I need more fire.” 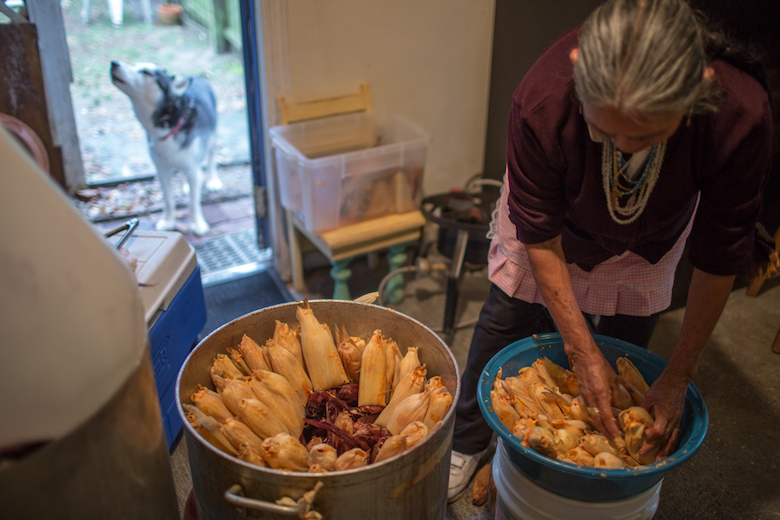 There are no restraints when it comes time to eat tamales. “Breakfast, lunch and dinner. Zamurano said, “Whenever you want to taste tamales, you eat it.”

After a 13-mile run from Red Creek State Park in Hampton Bays, to the Basilica Parish of the Sacred Hearts of Jesus and Mary in Southampton. The celebrant first blesses the crowd, the Virgin Mary is brought into the church for song and the worshippers are finally served around 4 p.m. 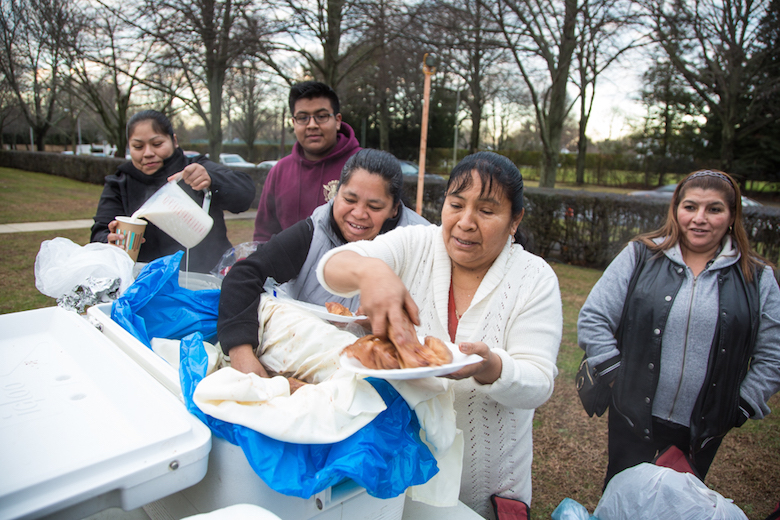 It’s cold outside but the tamales are hot. Arroz con leche, the perfect pick-me-up, made from rice, milk, cane sugar, and cinnamon, is sometimes made thick like rice pudding, but was served alongside the tamales as a hot drink, thanks to DeJesus Deli and Taqueria, 376 Country Road 39 in Southampton.

No worries if you missed the festival, you can always pick up a plate of tamales and arroz con leche at DeJesus Deli, Mexican comfort food at its finest. It doesn’t have to be December 12 to celebrate the Marian apparition. Dance and sing your way back to your car. Miracles happen every day.