In Jamesport, a new reason to stop and smell the biscuits. 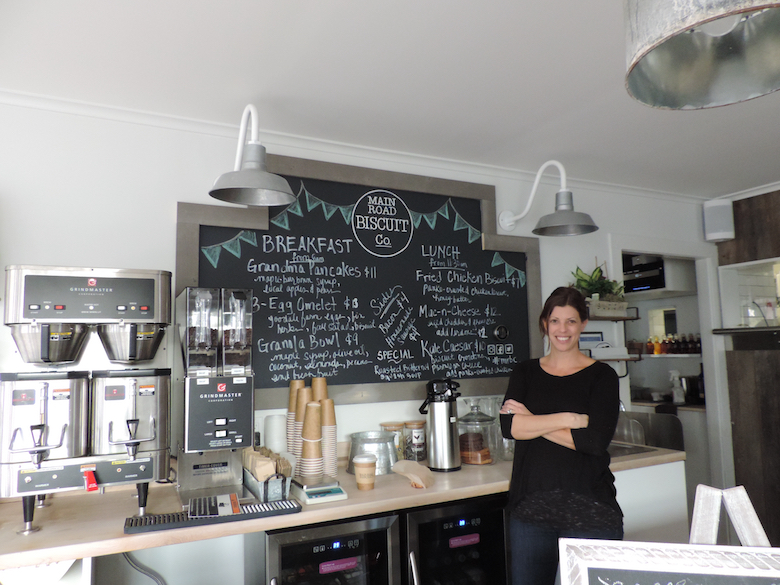 A ladybug crept daintily over rustic accent pillows, her bright orange shell matching the leaves of the trees outside. She stopped for a moment, basking in the last beams of a twilight sun on an unseasonably warm autumn evening. It was only then that she was spotted by Marissa Drago—owner and proprietor of the newly opened, highly anticipated Main Road Biscuit Co. in Jamesport.

“They’re good luck, you know,” I said as I coaxed the little beetle onto my finger.

“I know! Let’s let her out,” Drago agreed with a smile, unwilling to trap this tiny symbol of love and prosperity in the cozy dining room of her new venture. She walked over to the front door, unconsciously standing on the hand-painted “welcome” message on the floorboards; I blew gently on the bug and we watched it coast the breeze.

In less than a week of her soft opening, this was only the latest of a string of auspicious signs showing serendipity was at work. And for her, it’s not the first time that her instincts paid off. A former Brooklynite who started out in software in Manhattan, she once quit a lucrative path to become a barista. From there, she worked her way up in the restaurant industry to become Director of Catering for the prestigious Financier Patisserie in New York City.

And now, she’s left it all to make biscuits.

“Why biscuits?” I asked curiously, lifting a thick-cut bite of one, dripping with luscious housemade lemon marmalade and creamy butter to my mouth. “I mean, I love biscuits, but of all the things … why biscuits?”

Pushing back an errant lock of hair as smooth as a sparrow’s wing, she laughed aloud and said sheepishly, “Well, my husband Bryan bakes a lot, and he started making biscuits!”

Last winter was the start to the baking frenzy. Having moved out to Mattituck five years ago, they found themselves missing little things about their urban life. Marlow & Sons was one of them.

“We lived around the corner from there, and we missed having a cute, casual little place that we could just go to for a light bite. So we tried to recreate that at home by making butter-layered cinnamon scones and buttermilk biscuits. We started researching biscuits, analyzing weight, fluffiness, sweet to salt balance, and that was our winter project.

“It was a scary proposal, but we just couldn’t shake it!” Drago said.

“During that time, we had a lot of friends pop in and out to stay with us for a weekend, and so we’d serve the biscuits. And they all said,” she cheekily raised an eyebrow in jest, “‘… You could sell these, you know.’”

After months of hearing this, she did know. After all, she’d already been in pastry for a long time, and her husband was a great baker with family recipes like the Grandma pancakes (a page taken literally from his Belgian grandmother’s book and topped with seasonal sweets—it’s local apple and maple bourbon right now) that they spent months methodically testing and tasting. With the gears now turning, Drago considered the farmer’s market circuit. But when this space on Main Road opened up, that gut feeling of hers kicked in again—and she went for it.

“It was a scary proposal, but we just couldn’t shake it!” Drago said.

Because despite the name of the establishment, what she ultimately envisioned was not just biscuits and a bakery. Her concept was modern Americana: farm-to-table, light-sitting comfort food that evokes a sense of homecoming, the same sense that always brings people back. With that in mind, Drago knew she needed a brilliant chef. Vincent Purcell fit the bill like no other. 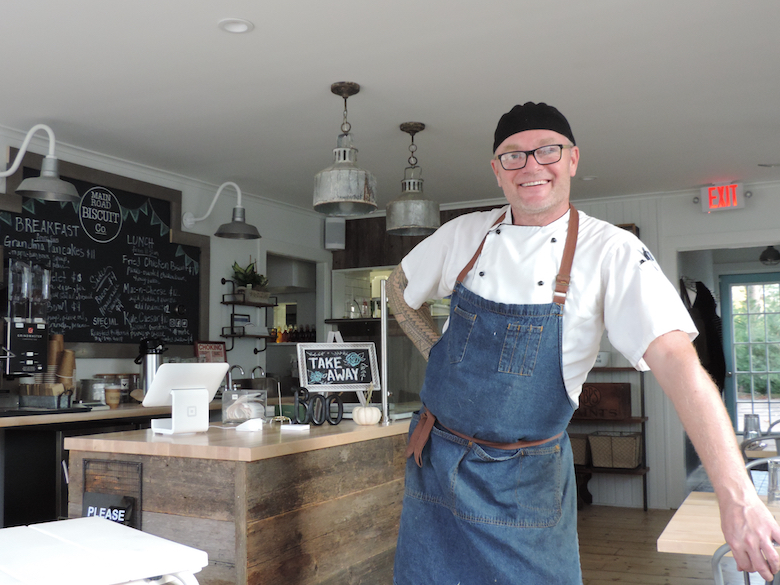 A self-taught chef who started in a family pub at just 11 years old, Purcell cooked his way from England to Spain, Austria, Germany, Bermuda, and even to a head chef spot for the Irish Olympic team for the London games before recently finding himself at Claudio’s in Greenport. Knowing the tight strings that bind the eating and drinking communities on the East End, I was interested in knowing how the two of them got connected. When I asked, he erupted in laughter: “I answered an ad!”

In an age where networks so often overlap, and partnerships are often born out of friendship, the simple old-fashioned-ness of a heaven-sent “Help Wanted” ad is nothing short of yet another sign of serendipity at work.

“I’d wanted to do something farm-to-table,” Purcell explained, his accent making that magical phrase even more poetic. “And this was the perfect opportunity.”

At Main Road Biscuit Co., everything is made from scratch: from sausage and jams to baked goods.

Drago chimed, “I was just really lucky; it’s been amazing working with him. I wanted someone who could execute the concept of things like the panko-breaded chicken on a honey-buttered biscuit, but also fine-tune … and that’s exactly what he does.”

He expands the palates of their already booming customer base by adding influences from his many travels to dishes. “I love doing fusion stuff, you know? Different flavors, aromatic spices, all that kind of stuff,” Purcell said.

“I was a bit leery when he told me he was putting garam masala in the butternut squash soup with biscuit croutons,” said Drago, “but people have been raving about it!”

In this way, they’ve already begun a creative process that challenges both of them to keep pushing for the highest and best quality dining experience. Part of that is their joint commitment to sourcing conscientiously; making everything from scratch, from sausage and jams to baked goods like the creamily rich salted brownie corner cookie, a dense, chewy yet crunchy delight; and designing specials around what local farmers have available.

#wholewheat #chocolatechipcookies are the answer to that age-old dilemma of how to justify eating huge, buttery cookies the size of your hand. Fiber! Salted brownie corner cookie peeks out behind. #itsferyerhealth #lovemyjob #mrbc #southoldny #jamesportny #eastend #northfork #foodwriter #cookies #cheatday

“Some of the bigger farms have greenhouses, so we’re planning on relying heavily on that. But you won’t find any frozen fries or anything in our kitchen!” Drago said as Purcell nodded. “We look for the least processed ingredients in things like flour and sugar, and we’re bringing in local fruit, eggs, cucumbers for homemade pickles, North Fork Roasting Co. coffee …” The list went on, much like the lines have been said already—a third sign of gut gone right.

“The community has been coming out in droves and everyone’s been really excited about us, supporting us,” Drago said, when I mentioned the crowds that have been spotted daily since October.