Edible and Montauk Brewing Company focus on quality and story, and this collaboration beer is a tribute to the individuals who helped brew this beer every step of the way.

With the early morning light bouncing off stainless steel tanks in our downtown Montauk brewery, Eric Moss is hard at work dreaming up a new recipe. His job is to manipulate malt, hops, yeast and water in a way that intrigues and satisfies the taste buds — and he’s very good at that. This time, Montauk Brewing Company and Edible East End focused on ingredients that came directly from New York State. Hops were selected from bines in Mattituck (Craft Master Hops) and malt from New York Craft Malt, located in Western NY. Edible East End Rye was born and brewed in Montauk and homegrown in NY State.

We’ve been talking to our good friends at Edible since opening in 2012, and after a couple years of discussing style and ingredients, collectively we landed on a Rye based beer. The goal of this beer was balance of spice, aroma, and bittering – all sourced in New York. Utilizing ingredients from our home state was exciting, and Eric looked into the availability of malt and hops.

Malt creates the core characteristic of the beer and for this brew we selected NY malted barley and rye from New York Craft Malt in Batavia, New York. Brewmaster Eric Moss selected a base beer crafted with 2-row barley named Erie Canal Pale 2-Row. Known to start out sweet and clean, this small batch malt worked beautifully. Hudson River Rye was used to add a spice component to this Pale Ale. The maltster tells of light to medium colored complexity. The first malt house to be registered in New York State since prohibition, Patty and Ted Hawley’s priority is to provide brewers with the absolute best quality ingredients. The malt house is located right on their farm, with most of the grains being grown within just a couple miles.

After being introduced to Marcos Ribeiro and Pat Libutti of Craft Master Hops in Mattituck, we were immediately impressed by the deep passion they had for producing organic hops on the North Fork. By implementing what they call, the “FlavorLock System” for their hops, the duo produce certified organic hops with noticeable northeast grown characteristics. Because they do not introduce pesticides, the hop farmers force their crop to defend themselves and ultimately enhance the flavor. In October, Marcos brought his harvest to the brewery with a massive smile, and endless knowledge about his hops. For the Edible Rye, we used three hop varieties; Zeus, Chinook, and Cascade. Zeus, known for its high-alpha yield was perfect for early addition bittering. Marcos was visibly proud of this variety, telling us about the resinous character that he thought would pair well with a Rye Pale Ale. Chinook was second and boasts spicy pine characteristics. A growing standard in the craft beer world and used in the industry classic, Sierra Nevada Pale Ale was Cascade. Its distinct flowery, citrus quality worked well as both bittering and aromatic hops. The three varieties grow well in the North Fork sun and were a great fit for this beer. 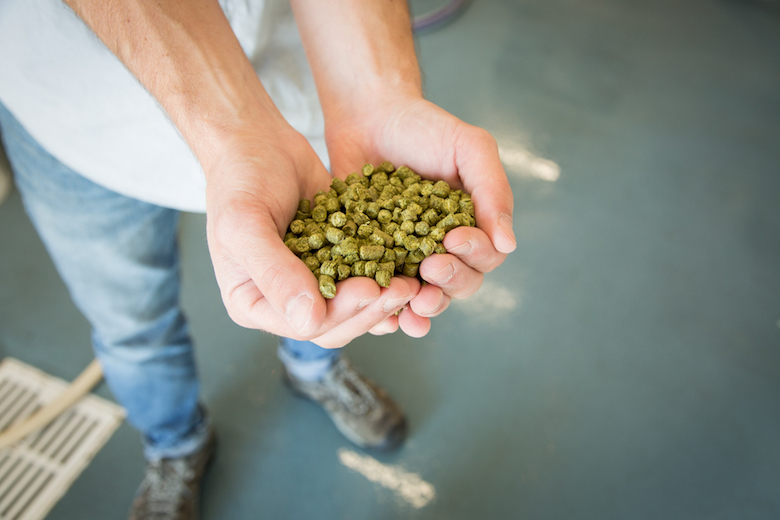 Firing up the mill in the early morning, Eric loaded bags of grain into the hopper, cracking each kernel precisely would ensure the best efficiency. About 420 pounds of grain was crushed and transferred by auger to the mash tun. The goal would be to pull all of the fermentable sugars from the grain, which would add to fermentation quality and ultimately the brew that Eric and Edible envisioned. The brew day consists of carefully measuring each ingredient, interrupted intermittently (in a positive way), with sampling of other beers currently fermenting that act as a catalyst for discussion and observation. We’d talk about our Wave Chaser IPA and the four hop varieties that would impart different tropical and pine notes. Then we’d discuss the higher ABV double IPA in tank three. This beer was just brewed and boasts high bitterness and alcohol levels. With the opening of scallop season upon us, Riley Sullivan (brewer) was looking forward to harvesting fresh scallops for our Montauk Bay Scallop Stout, a hit last year. 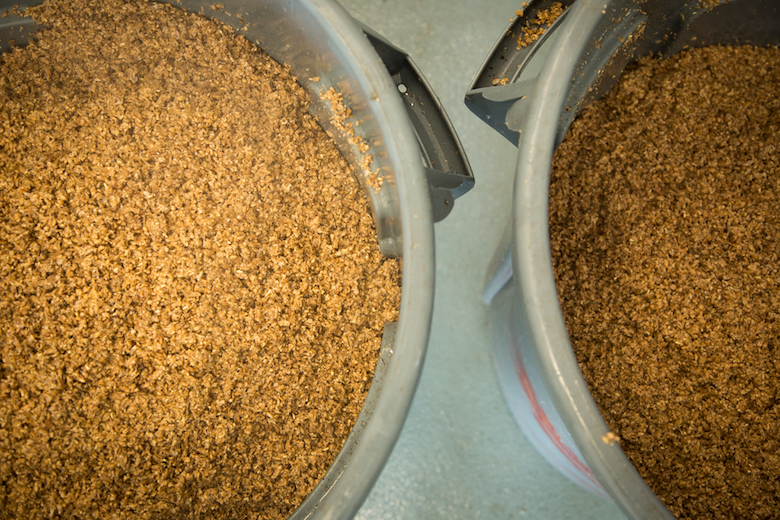 Eric and Riley were cleaning the space while brewing and speaking about the process, something that perhaps only good brewers identify with. A clean kitchen helps to make clean beer and they are intent on keeping the space as sanitary and polished as possible

Eric tests samples of liquid during the brew day. He’s inspecting volumes of sugar content and making sure the beer is developing into the vision he had in the previous weeks. He notes color, telling me that the beer is a bit darker than he initially thought. He suspects the variation is from the pale malt, either way he seemed satisfied with his creation so far. Brewing on the east end has allowed us to avoid having any waste from the spent grain. Our friends at Amber Waves Farm in Amagansett use the grain as chicken feed and compost. Being able to take the brew full circle with other New York State farmers is very gratifying. 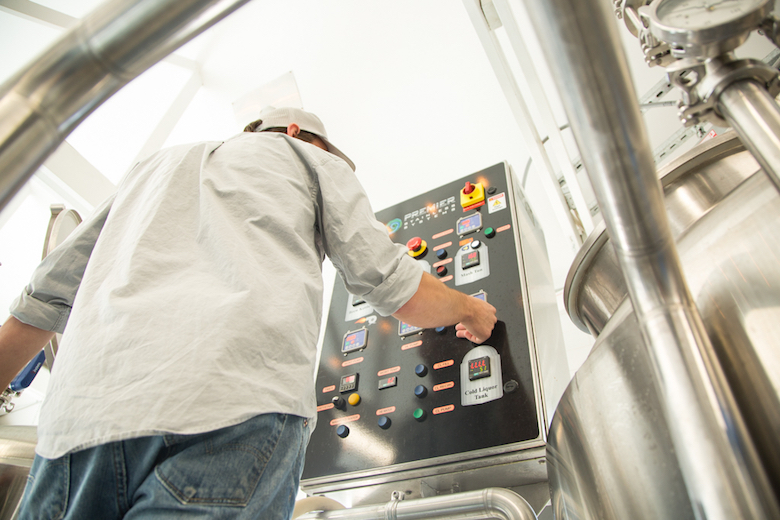 The dry hop additions would be calculated and added over the next 7 days. Cascade, Chinook, then Zeus would add aromas post fermentation. Over the next couple of weeks the beer evolves and will be celebrated amongst friends on the East End and in New York City. A truly local beer, brewed in small batch, with New York ingredients.

There’s something special about pouring freshly brewed beer into a glass. The experience of tasting the beer, smelling the beer, and celebrating the beer is what gets us excited.. The Edible Rye Pale Ale is unique and limited thus experiencing this beer at the source is what makes the process so much fun. Edible and Montauk Brewing Company focus on quality and story, and this collaboration beer is a tribute to the individuals who helped brew this beer every step of the way. 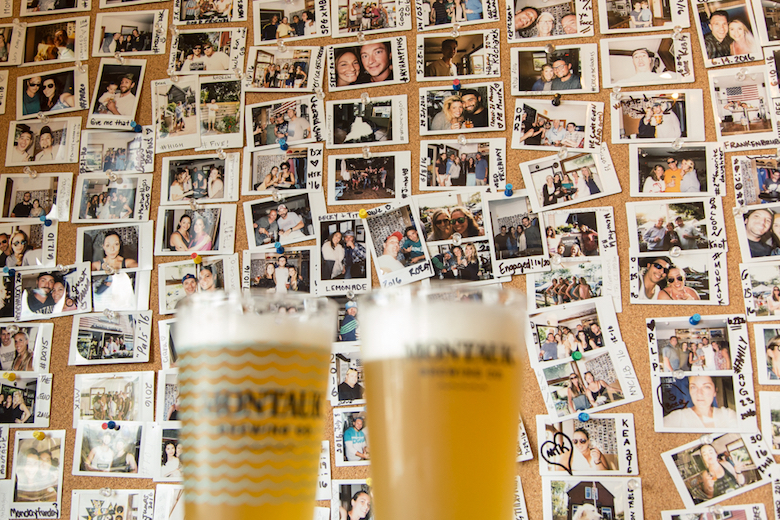 Find the Edible East End Rye Pale Ale on tap at Montauk Brewing Company for a limited time starting November 22—and on tap at the following locations.