An ugly, awe-inspiring sight serves as a wake up call. 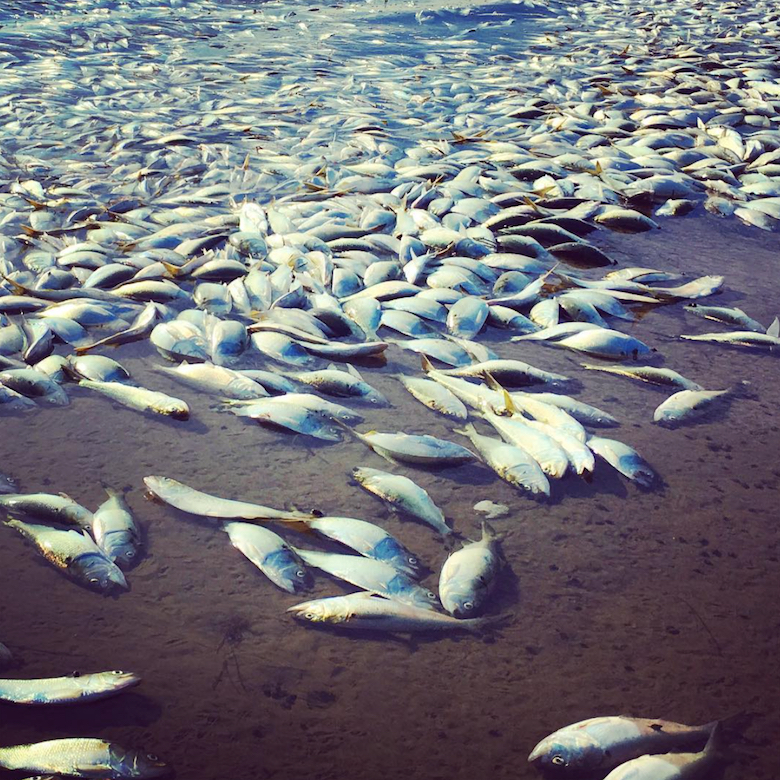 As I neared the Shinnecock Inlet, the smell in the air was pungent and I knew there would still be fish. Down the rickety steps to the back deck of the now defunct Tide Runners club garnered the pitiful sight of hundreds of wide-eyed silver bunker fish swirling atop a graveyard of bunker sunk below the surface. Breathtakingly eerie, at once beautiful and horrifying, the scene was a fraction of what Hampton Bays residents awoke to days prior.

Known as a fish kill, the November 14 event was, thankfully, not caused by environmental factors. Earlier in the year a fish kill in the mouth of the Peconic River was caused by poor water conditions. In 2015 three fish kills left hundreds of thousands of bunker dead between the Peconic River in Riverhead and Reeves Bay in Flanders, an area with chronically low-dissolved oxygen and increased nitrogen pollution.

This recent event is widely believed to be the result of bunker chased by natural predators—bluefish and striped bass—into the canal. The locks are set to close at certain times, depending on the tides, and Monday’s “super moon” contributed to bad timing all around.

The name bunker is used to describe young, undersized menhaden, which Native peoples like the Montauketts and Shinnecock used to fertilize their crops. While many today believe menhaden is inedible, it was consumed as “American Sardines” in the 1800s. Previous to 1860, when the Shinnecock Canal was built, there were naturally occurring fish kills which inhabitants used to their advantage, spreading the fish on crops.

A large fish kill is upsetting to some because of the stench and sight alone (how many Hamptonites today would tolerate acres of dead fish next to their favorite farm stand?). The Southampton Town Trustees and bay constable coordinated this week with local fishermen to harvest many of the bunker, since bunker are still used for bait. But to most, a large-scale fish kill signifies something more foreboding than stinky landscaping practices. It is the graphic reminder of the potential extinction of our own food supply and the ill-health of the earth we need to feed us.

When the locks in the canal closed last week, the water became stagnant. After dark, photosynthesis stops and oxygen levels further decrease, thus suffocating so many fish in a small area. But low dissolved oxygen can also result from high temperatures (i.e. warm water from climate change), poor circulation of water, and large amounts of other dissolved minerals in the water such as nitrogen from human waste and landscaping fertilizers.

Currently, in the Shinnecock Canal, the water in the canal is clear, and the State Department of Environmental Conservation did not immediately find any pollutants in the area, though they took samples just to be sure. We can thank the recent drought for a lack of storm run-off that would have caused the canal to be polluted—yet another double-edge sword in a complex and fragile ecosystem faced with global Climate Change.

Seals lounging at Cupsogue Beach, fleets of dolphins leaping past Mecox, stranded flying fish on the sand and bright turquoise tropical fish swirling around ankles in Mediterranean-color water… this past summer felt like Dory and Nemo had found us. A rise in water temperature is something to be wary of, but as long as temperatures drop after Halloween (it is almost Thanksgiving, but let us cross fingers for the moment), gulf streams are not indicative of unhealthy waters. But these noticeably extreme events raise our awareness of real, complex problems affecting our local waterways and food supplies.

There are dozens of examples of East End bays that experience very low levels of oxygen at night, particularly in summer. Residents of Shinnecock have been in an extended battle with the Town of Southampton over development plans that affect the same area anxieties were focused on this week. Rezoning to allow for large hotels, condos, and to build a new Southampton Hospital on the Stony Brook Southampton campus would change the character of the area and seriously impact an ecosystem relied on for food as well as safe living. Consider the fragility of underground water flows that could be contaminated by one leak in a pipe containing hospital waste.

And while a new technology waste system was installed at the northern end of Shinnecock Canal in June, complaints that it wasn’t operating properly still had not been addressed and remedied by September. This perhaps speaks less to corruption than to a relatively small community of humans who can wreck havoc quickly on an entire ecosystem without having the ability to reverse the damage. Corruption manifests in an arrogance to think we do have that ability.

The Atlantic ocean—its bays, coves, inlets and wetlands—work together on a scale and complexity most of us can barely wrap our minds around. As a marine biologist told me this week, “There’s a lot of things happening out at deep sea, things we aren’t even aware of.”

Which makes a large-scale fish kill a shock to us humans. It is an awe-inspiring sight that is also a wake-up call. While this recent fish kill was not caused directly by man’s interference with the health of our water ways, it serves to remind us that we cannot afford the fish kills that aren’t a natural occurrence.

As I stood on the deck of a structure waiting to be razed for the building of a huge new development built directly on the canal, thousands of eyes stared up at me from below the swirling currents. As if they were saying: look at what we do to ourselves, and mind it for your own future.

Many thanks to members of the community of Hampton Bays, Stony Brook University, and Cornell Cooperative who spoke with Edible about local fish kills and ecosystems.