Edible learns the ins and outs of the fir trade from Shamrock Christmas Tree Farm. 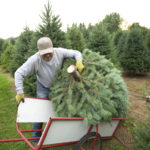 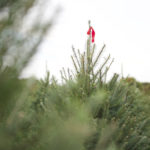 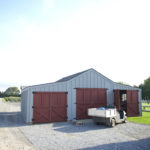 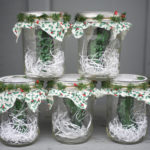 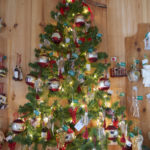 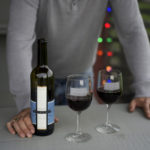 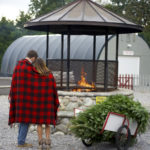 Christmas is always in the air at Shamrock Christmas Tree Farm in Mattituck. Truly. As you walk through the fields of evergreens in varying heights, a definite green piney holiday fragrance wafts up to greet you, even if you visit in the middle of September.

And the fragrance leads to my first lesson in the kind of trees that will and won’t grow here on Long Island.

“These are Douglas firs (Pseudotsuga menziesii),” says Joe Shipman, head of this family business which will inaugurate its 21st season of growing and selling cut-your-own trees this year. “When people say they want that Christmas tree smell, this is the tree they want. There are two other main types of Christmas tree, the traditional balsam fir (Abies balsamea) and the Fraser fir (Abies fraseri). The Douglas fir, which you see here, has the smell, but it has thinner branches, so doesn’t hold some of the heavier ornaments as well. The Fraser fir has stiffer branches, but it isn’t as aromatic. The thing is, the Fraser fir, which is more of a premium tree, won’t grow at sea level. It likes to be at least 500 feet above sea level. So we grow Douglas firs here and bring in Fraser firs from Pennsylvania.”

There’s a lot more to Christmas tree production than meets the eye when you head out with the family for a tree to strap on the top of the car (which you shouldn’t do! See below). Joe Shipman is a font of Christmas tree information, but his knowledge had to be built over time. He and his wife, Kathleen (neé Ellis), were sweethearts at Southold High School and together built a family with four children and a tree-trimming business—now owned by one of their sons. 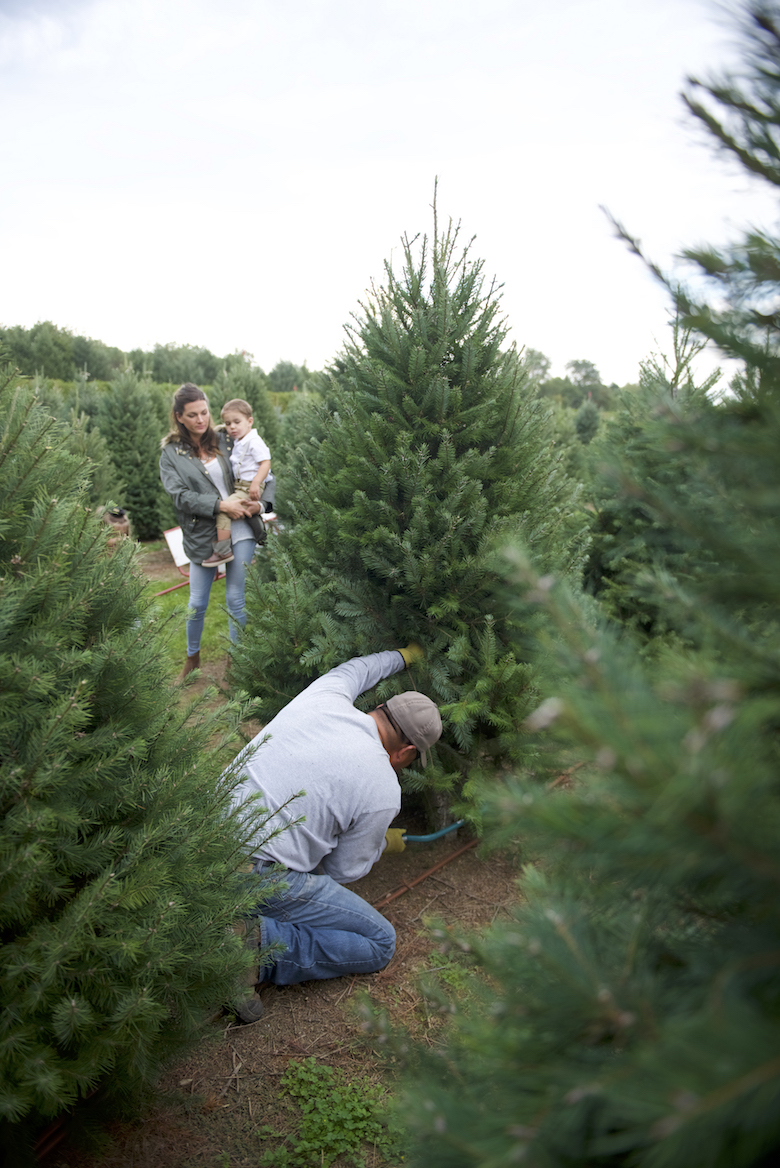 “During the winter we needed something to do. If you didn’t have work, you didn’t have money. We said ‘Let’s try Christmas trees,’” says Shipman, a tall man with a springy step and bright-blue eyes who looks like an outdoorsman through and through.

They began planting and acquiring parcels piece by piece. They now have 20 acres.

“The first few years we made a lot of mistakes,” Shipman recalls. “That’s why some of the fields vary a bit in size.”

Over time he learned to plant one field each year with foot tall seedlings acquired from the same company in Pennsylvania: “You want consistency from year to year.” The trees grow approximately a foot a year, which means the practiced eye can tell how old the trees are just by looking at them. He’s on a seven-year rotation with seven fields of approximately two acres each and between 2,600 and 2,800 trees per field. They plant in April; if there are still trees left from the previous season, they’ll take them out rather than plant around them.

“It’s funny,” he says. “No matter what you do to amend the soil, no matter if you treat all the trees exactly the same, they vary because of the soil. The soils vary a bit; the south end is more heavy and clayey and the north end is sandy with better drainage. Overall though, the sandy loamy soil is conducive to Douglas. There are color varieties; I like that blue tinge and I wish I could get that in all of them. But they vary and that’s the nature of the beast.

Making a local tree farm viable means more than just growing them, chopping them down and selling them. Shamrock turns into a carnival of fun every weekend of the season right up to and including Christmas Eve.

“You need to do the best job to get the best result,” he adds. “We are constantly experimenting. Right now we have someone from Cornell [Cooperative Extension] who is conducting an experiment with biochar,” Shipman says, referring to the plant-based charcoal that may have a boosting effect on soil amendments. “It’s a two-year experiment. She has the trees labeled and tagged and she’ll know this fall whether biochar is viable for the Christmas tree industry.”

And speaking of industry, making a local tree farm viable means more than just growing them, chopping them down and selling them. Shamrock turns into a carnival of fun every weekend of the season right up to and including Christmas Eve. Families make a day of it, and why not? There’s a trackless train that does rounds of the farm (it’s a 14-minute ride) with musical accompaniment, an outdoor fireplace, two wineries (Pellegrini and Saltbird Cellars) pouring, Harbor Lights Oyster Company shucking clams and oysters, hot chocolate and hot dogs, live music and—of course—a gift shop packed with lovely ornaments and decorative items. You can get your garland and wreaths, too, as well as handcrafted grave crosses and blankets to remember lost loved ones and admire or acquire restored antique sleighs. 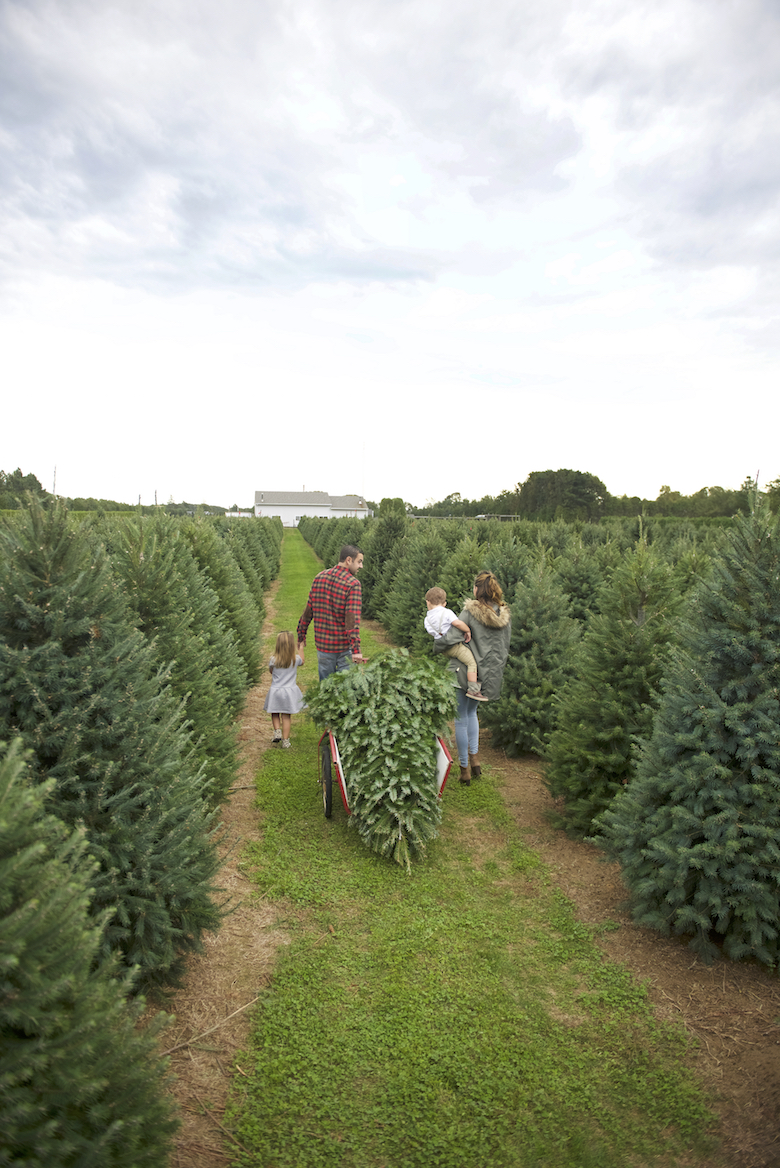 “It’s very family oriented; we try to have something for everyone,” says Shipman. “I used to notice the ladies trying to shop while the husbands just walked around kind of grumpy. We introduced the wine and the fireplace and suddenly everybody’s happy. The husbands say, ‘You go ahead and get that other wreath; I’ll be right here.’”

If you go to get a tree, chances are you’ll run into at least a few members of the Shipman clan. Two of their sons come in to work for the season, two of his grandkids work the hot chocolate, Kathleen Shipman takes care of the gift shop, inventory and decorating, and a daughter-in-law usually takes a key role but will likely be out this year tending to newborn twins. And much of the 30 to 35 seasonal crew has been with them for many years.

“I still call them kids, but I guess they aren’t kids anymore. They started when they were 15 and now they are 35,” he says. “They come back every season because they make good money and we provide meals because they don’t really have time to take real breaks. They know what they’re doing.”

In the meantime, ahead of the Christmas rush, Joe has got to go. He’s got an important appointment there won’t be time for once the season opens. It’s time for clamming on the North Fork with his granddaughter. 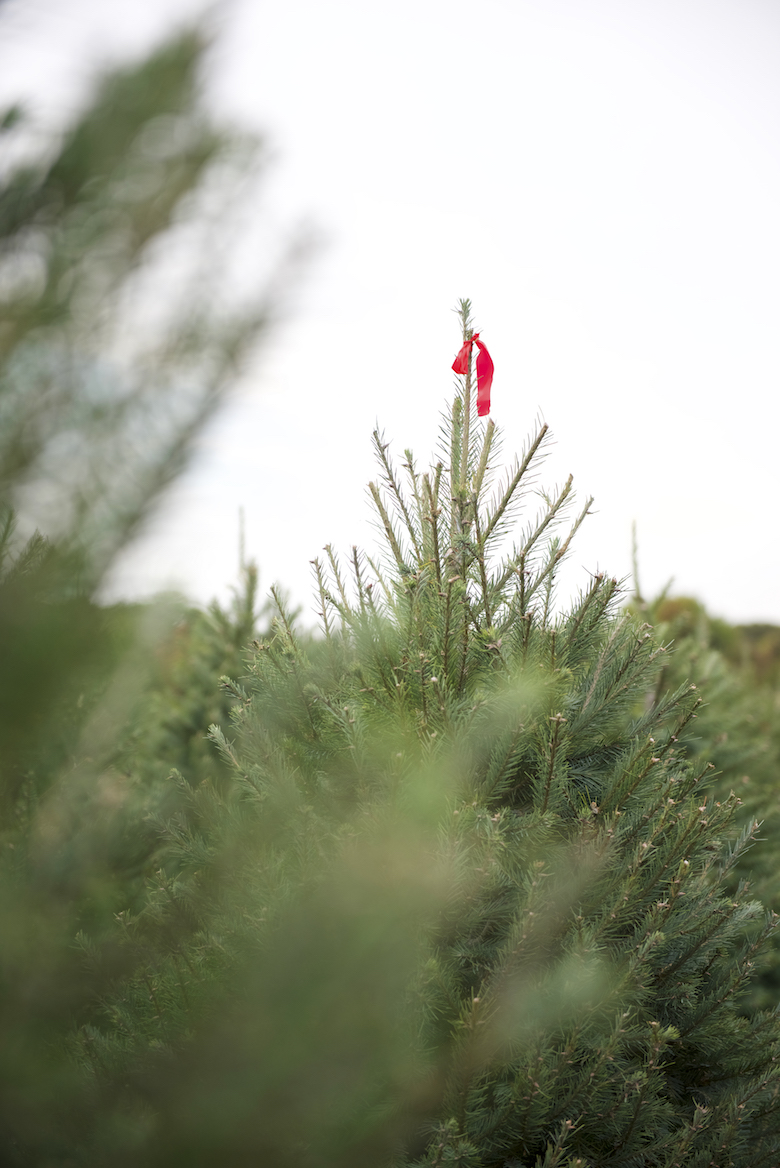 You and Your Christmas Tree

He’s right. Joe Shipman is never going to win this battle with his customers. He is certainly not going to win it with me. But he wants to share it anyway.

“The first thing people do wrong is tie the tree to the top of the car and drive home on the expressway,” he says. “I really try to discourage people from doing it. It’s a living tree and you have the trunk facing the front of the car and it’s just drying up in this wind tunnel. People come with these SUVs and I try to get them to put the trees inside the car, but they won’t. Nobody will.”

When you get your tree direct from a farm like Shamrock, you want to follow a few guidelines. One is to not tie the tree to the car, but of course the tree atop the car is the family-friendly equivalent of strapping a seven point buck to the top of the car, so good luck with that.

But other pointers are worth trying.

“When you get home, check the bottom of the tree. If it is still wet and sticky, it’s fine. You can take a quarter inch off the bottom if it’s not,” says Shipman. “Keep it in a shaded area in a bucket of warm water with the net still on. At Shamrock, we shake the tree before netting it, so the tree is clean; there shouldn’t be a lot of needles. When you are ready to put the tree up, do it with the net still on so it is more manageable.”

He also hands out a care guide for the trees. Among the standout hints is that a stand should provide one quart of water per inch of stem diameter and that you should avoid whittling down the tree stem to make it fit the stand, because the outer part is the most efficient at pulling water in. Also, try to avoid setting up near a heat source.

Or, you could just buy the tree on Christmas Eve and not have to worry about it at all!