Announcing Our Holiday Issue, with Stories from All of Our Titles

During the holidays we gaze around our towns and tables, and there are almost too many reasons to be grateful. 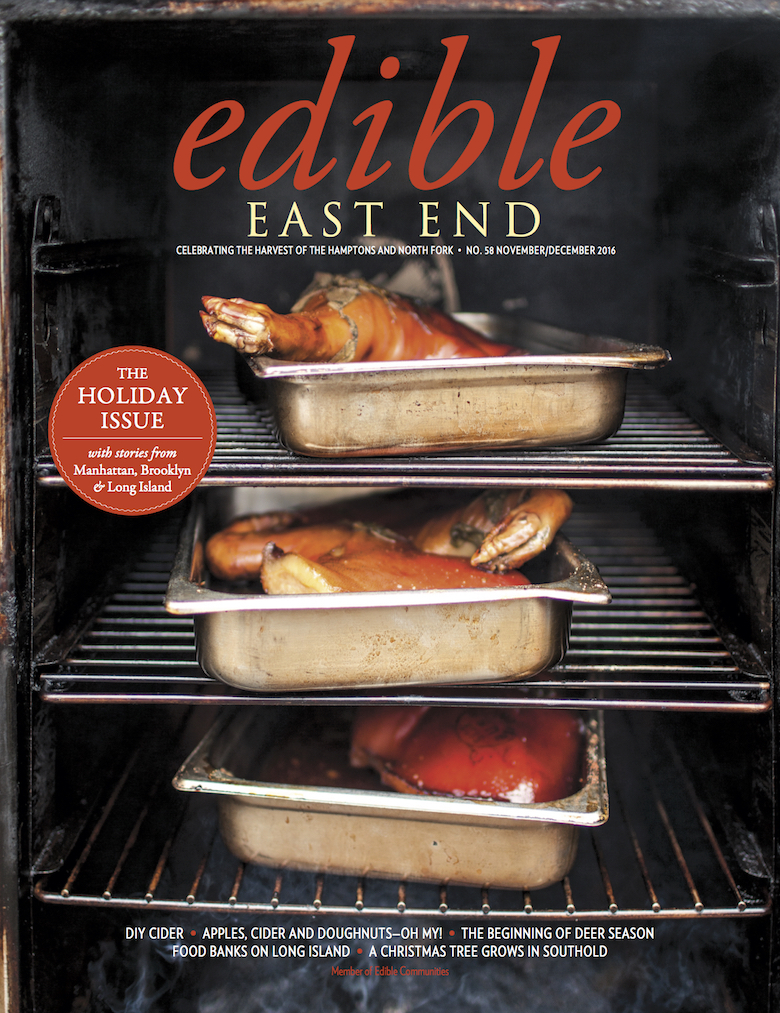 Who cannot help but be filled with mirth this time of year? As these pages attest, we gaze around our towns and tables, and there are almost too many reasons to be grateful.

Blame it on the teary Yuletide tunes on the radio or the Spotify playlist we crowdsourced from NYC bartenders and hosts. Or the giddy dollop of cream on top of the Long Island cheese pumpkin pie. You’re inspired to pop a bottle of some Empire State wine that has been collecting dust. They are putting wine in growlers, for goodness sake. What could be easier than bringing a jug-o-wine to a meal with friends as a thank you for all the good times in 2016?

The coming cold gives us other excuses to do some elaborate cooking. Like a roast suckling pig as is the tradition at Almond restaurant in Bridgehampton for ringing in the New Year. Peruse the shelves of your local farm stand in November, December and well into the new year. You won’t find as many tomatoes or peppers, but there are plenty of pears, cold-season clams and all sorts of stuff made with cider, like dense little doughnuts at the Jericho Cider Mill or your own DIY cider (just like our revolutionary ancestors made).

That warm fuzzy feeling is no surprise. Because knowing and loving your food community just makes life better—for everyone. When you have some role in the harvesting itself, the fish, fennel and fingerlings taste that much sweeter. Head to cut-your-own destination Shamrock Christmas Tree Farm in Mattituck where the family has been giving people that Platonic Douglas fir “Christmas tree smell” for more than 20 years.

We gaze around our towns and tables, and there are almost too many reasons to be grateful.

If you’re lucky you know someone who forages and hunts. That certain friend who shows up on your doorstep with a basket of chicken of the woods, winter-caught squid, side of venison, goose fattened on corn stubble. Too much for them to use alone so they have to share.

There’s the bittersweet to these seasonal milestones. When the meal reaches that certain sad point of the night, there’s the chance to raise a glass, or two, to “the first for thirst, the second for taste,” John Steinbeck wrote. We raise one to Dorothy Hamilton, our colleague and friend who passed too suddenly earlier this year. Another to the older farmers, fishers and hunters who passed on their knowledge to the next generation before they went.

The good news about us all caring more about food experiences, we know it’s too valuable to let all the effort on the part of the farmer, the grocer, the butcher to let it end in landfilled produce. Even better, look at food rescue pioneers like Long Island Cares, which actually does get fresh, local food that might otherwise be wasted to those who don’t have access or can’t afford to feed themselves well. “I’m a big foodie, farm- or dumpster-to-table kind of person,” says one volunteer at a soup kitchen. “When you see food sharing, it changes who you are.”

Here’s to a winter filled with sharing food with you and yours. Happy holidays.