Cooking with the Muse: An Ode to Words and Eating Well

Rejoice, literary-minded locavores. Stephen Massimilla and Myra Kornfeld have written the cookbook of your dreams. 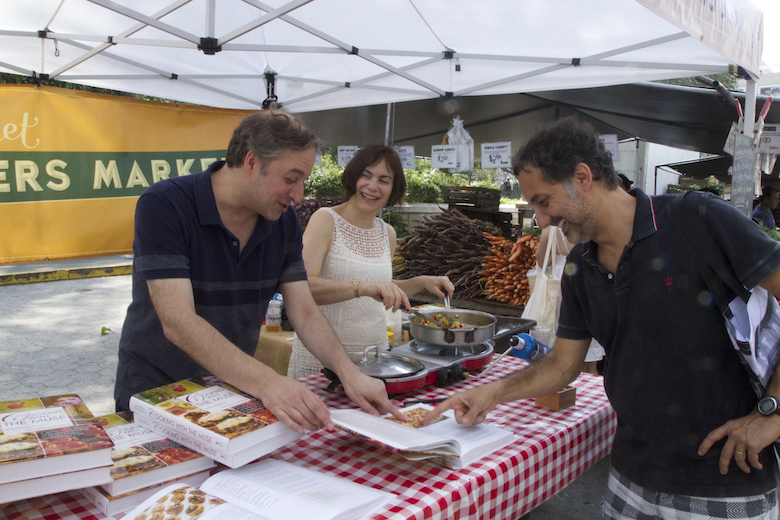 Stephen Massimilla and Myra Kornfeld show off their new book, Cooking with the Muse, at Union Square.

The couple had just toured the Montauk Farmers Market across the street, on their annual trip to the East End from their home in Manhattan. Come June, after a long semester of teaching, they are both ready for some rest and relaxation at Gurney’s Inn. As per our tradition, my husband and I meet them for dinner at Nick and Toni’s to catch up.

This year, there was so much to catch up on, I met them several days later for lunch at my favorite taqueria to discuss their first joint publishing effort, “Cooking with the Muse: A Sumptuous Gathering of Seasonal Recipes, Culinary Poetry and Literary Fare.”

“You can read it if you don’t cook,” said Massimilla.

“If you do cook, it’s great,” Kornfeld interjected, “I cannot stand when something doesn’t work in recipe.”

The married authors have known each other for 21 years. In typical fashion, they finish each other’s sentences. Good if you’re writing a book together. Getting them to stay on topic, over egg tacos, Mexican street corn and watermelon juice, was well, like the book, “digression after digression.”

The book contains 500 pages and 150 recipes, divided by seasons, and accompanied by related poems, notes and historical references. From the history of chocolate and Aleppo pepper to the philosophical  role of food in classical Greek poetry to Galway Kinnell’s poem “Blackberry Eating,” and recipes for Roasted Butterflied Sumac Chicken and Spiced Espresso Chocolate Pudding with Whipped Pumpkin Cream.

Cooking with the Muse is bound to rival Sally Fallon’s 1995 book, Nourishing Traditions: The Cookbook that Challenges Politically Correct Nutrition and Diet Dictocrats, offering healthful and easy-to-digest recipes based on the nutritional guidelines set forth by the Weston A. Price Foundation.

Make no bones about it, Cooking with the Muse holds some serious intellectual and nutritional heft, but their shtick is pure comedy. At a Poet’s House book party and presentation last spring, Massimilla and Kornfeld demonstrated their six “real food philosophy” rules. Here’s the summary:

Number one: All vegetables deserve respect, even the ugly, gnarly ones, like celery root and sunchokes. “Vegetables that get no respect? Quite a few” Kornfeld said, with a nod to Rodney Dangerfield.

Number two: Beware of the homogenization of taste. “Onions are the basis of, of everything, pretty much,” laughed Kornfeld.

Number three: Go back to the oldest food traditions. “The Cyclops was an artisanal cheese maker,” said Massimilla.

Number four: Fat is where it’s at. Name that butter quote: “There’s nothing the matter with butter,” “If you’re afraid of butter, eat cream,” “The better the grass, the better the butter,” “With enough butter, everything tastes good.”

Number six: Justify the ways of God to yourself. “Chocolate is good for you,” said Massimilla.

To prove the last point, that “natural sugars don’t spike the blood sugars as much as processed,” they serve Fudgy Nibby Brownies at many of their book events, albiet not the Alice B. Toklas version. 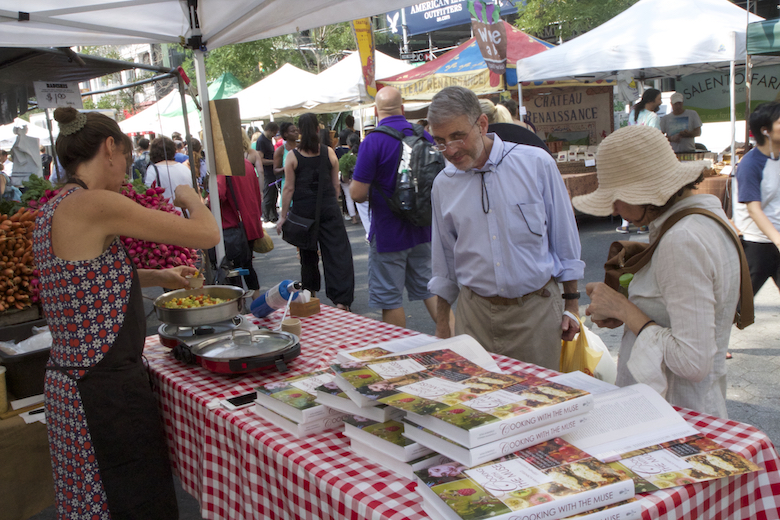 On a Saturday in September at the Union Square Greenmarket, the authors also gave away 150 samples of Harvest Succotash, from the book’s first chapter, “Autumn.” The book contains many recipes inspired by indigenous cultures around the world. This colorful dish, comes from the Narraganset word “msickquatash,” and offers a taste of true American cuisuine.

Prep work was done the previous day. Ten pounds of fresh lima beans were shelled and peppers were chopped, from Van Houten Farm, and Samascott Farm corn was taken off the cob. At the market, the vegetables were cooked in unsalted butter from Bobolink Dairy. (See recipe below.)

“It had to be 90 degrees and 95 percent humidity that day,” said Kornfeld, “Free food makes a feeding frenzy.” Being on the other side of the farmers market table for the first time, gave them a new found respect for vendors.

Cooking with the Muse took ten years to create from concept to farmers market table. It wasn’t all Peaches ‘N’ Cream Heaven Smoothies and Wendell Berry poems, but they came out the other side and we’re all a bit wiser for it.

“After all that, we still like each other,” said Massimilla.

Witness the magical marriage of two genres at Book Culture, 536 West 112th Street on November 10 at 7 p.m., when Massimilla and Kornfeld will meet, greet and eat. They’ll serve desserts like their famous brownies, Apple-Pear-Cranberry Crumble or Pumpkin Pie Muffins.

“We live on those pumpkin muffins, a real staple,” said Massimilla, “They always work. Not too messy. It is a bookstore.”

1. Shell the lima beans by bending each pod in the center until it tears. Open the pod and pop out the beans; relegate the pods to the compost pile. Enjoy the meditative relaxation of shelling the beans or delegate the task to someone you need to keep busy. You should have 2 1/4 cups of beans.
2. Add the shelled beans to a medium pot along with the water and 1/2 teaspoon salt. Cover and bring to a boil, then lower the heat and simmer for beans 5 to 10 minutes, until almost tender. Drain off any remaining cooking liquid.
3. Melt the butter over medium heat in a large skillet. Add the corn, bell pepper, jalapeño, and lima beans and cook for 5 to 7 minutes, covered, until all of the vegetables are tender. Uncover and sprinkle with salt and pepper. Stir in the scallions and serve hot.