Behind the Bottle: 2015 Grapes of Roth Virgin Berry Riesling

Roman Roth and his family drink this riesling together every Christmas Eve. Wait till you hear the story of how it’s brought to life. 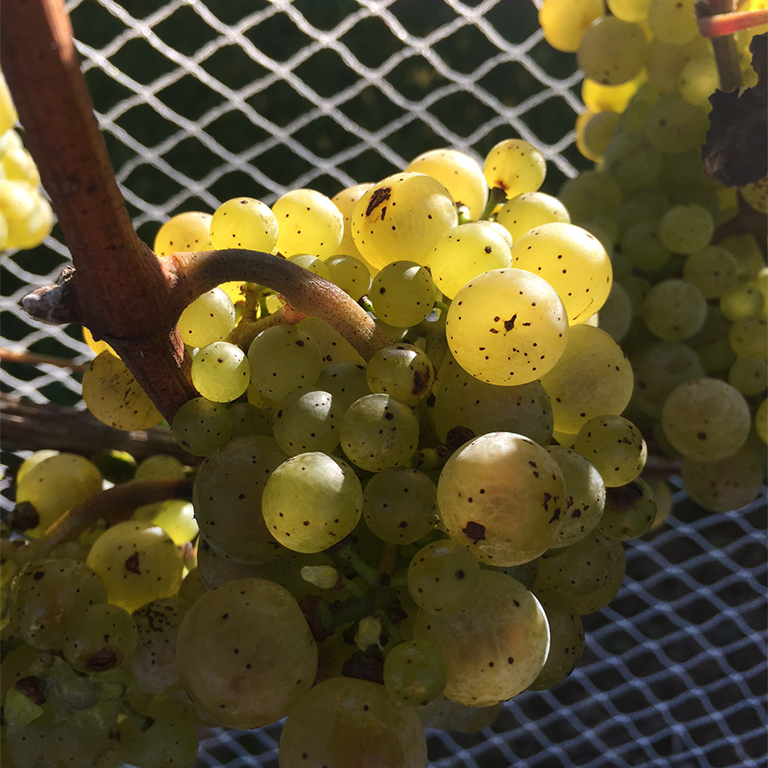 During harvest season Roman Roth, winemaker and partner in Wölffer Estate Vineyard in Sagaponack, visits the North Fork a couple times of week to check out how the riesling is doing. Each year he makes a riesling under his Grapes of Roth label and no riesling is grown on the South Fork vineyard. So he buys from different growers including Kontokosta in Greenport and Joe Rielly in Peconic. He’s checking on ripeness and the health of the fruit, so he can have input on when to pick. He’s also looking for something else, something he and his vineyard manager, Richie Pisacano of Roanoke Vineyards in Riverhead, have noticed happening in most vintages. He’s looking for the development of looser clusters with smaller fruit. Grapes that don’t have seeds in them. He’s looking for what he calls “virgin berries.”

“I’m like the mother-in-law coming to visit,” he says. “And Richie’s the godfather.”

Here’s why: Since 2011 Roth has been making a separate bottling of riesling using only these berries. (His “regular” riesling was first bottled in 2007. Edible’s story about it is here.) What he likes about them can get kind of wine geeky but it’s something all consumers can appreciate when they taste the wines next to each other.

“The virgin berries can hang on the vine longer,” says Roth, because the loose clusters allow more air circulation, which prevents diseases like mold and mildew, something Long Island residents are well familiar with given our humid summers and falls. “Which lets them get riper,” he adds, “and that adds another layer. Skin-to-fruit ratio gives it more character, more sun flavor, more texture, more structure. That’s what I want to say, ‘more structure.’”

Winemakers and growers call it phenolic ripeness, which measures how ripe the skins and seeds (if there are any) get. It’s just as important as ripeness due to sugar levels, which are measured in the U.S. on the Brix scale.

“It can get to 19 or 20 Brix,” says Roth. Which is great on Long Island for a late ripening wine variety like riesling. (It is the last white to be picked before everyone starts on the reds.) He doesn’t want too much sugar. Higher Brix levels make for higher alcohol levels. Roth is happy with his rieslings hovering around 11 to 12 percent.

Roth and Pisacano identify the virgin berries by lots. If a block of vines shows a preponderance of the loose clusters, they ask the growers to wait to pick. Once the go ahead is given — a decision affected by many elements, mostly the weather — the grapes are harvested by hand and brought back to the winery. The yield per acre is much lower than what is picked for the regular riesling. “It’s not cheap fruit, that’s for sure,” he says.

Once in the cellar, the virgin berries are fermented using ambient yeast, which draws on microorganisms floating in the air. The regular riesling, which arrives in the cellar earlier, has already been inoculated with Epernay 2, a French yeast Roth uses because, he says, it likes to struggle, which means it foams a lot and takes its sweet time to finish.

But not as long as the ambient yeast for the virgin berries. Ambient yeast is much less reliable than commercial yeast; it’s more likely to result in a stuck fermentation and takes about two to three months to finish. “This is what makes me worry about it,” says Roth, “but it adds a creaminess, an oiliness, a softness. It balances those tiny berries and the phenolics. That’s the key. That’s what makes the virgin berry character.”

The next step is a very Rothian method. He lets the wine sit on the dead yeast cells, the lees, for a total of three months. “You can’t rip the mother from the children too easily,” he is known to say. The mother is this analogy is yeast, which turns grape juice into wine. The last step is “fine tuning” the addition of sweet reserve, reserved grape juice from the harvest that he can add to get sugar levels in the finished wine up to six to seven grams per liter. It’s on the dry end for riesling, which is known for its high acid levels, and it’s the style Roth likes.

It’s hard to find a precedent for this kind of wine. Roth says he’s heard of it in his native Germany, but has never seen it. He takes the name from the German jungfern frucht, which refers to the first fruit given by a grape vine, and translates to virgin fruit.

We tried the 2015s side by side. They’re almost the same color; the Virgin Berry is a bit more gold. But the differences start to emerge on the nose. The riesling smells like green apples; the Virgin Berry is earthier, not as aromatic. On the palate the regular tastes fresh and crisp with peachy fruit. The sugar content gives it a little heft, and the refreshing acid cleanses the tongue. “Some rieslings can get on your nerves,” says Roth. “They poke you. Some people get annoyed of sweetness of riesling, some by the acid. But here, the sugar is a faint lushness.”

The first riesling whets the appetite; the second tastes like dinner. In fact, Roth and his family have a tradition of drinking this riesling on Christmas Eve with a chicken puff pastry dish. “Two thousand fifteen was such a hot year,” says Roth. “You can taste the lushness that comes with a sunfilled vintage.”

Grapes of Roth Riesling is available in the Wölffer tasting room for $26; the Virgin Berry Riesling is $30.