Clam Deployments are Underway in Shinnecock Bay (and You Can Help)

By the end of this season, the Shinnecock Bay Restoration Program will have deployed 2 million clams. 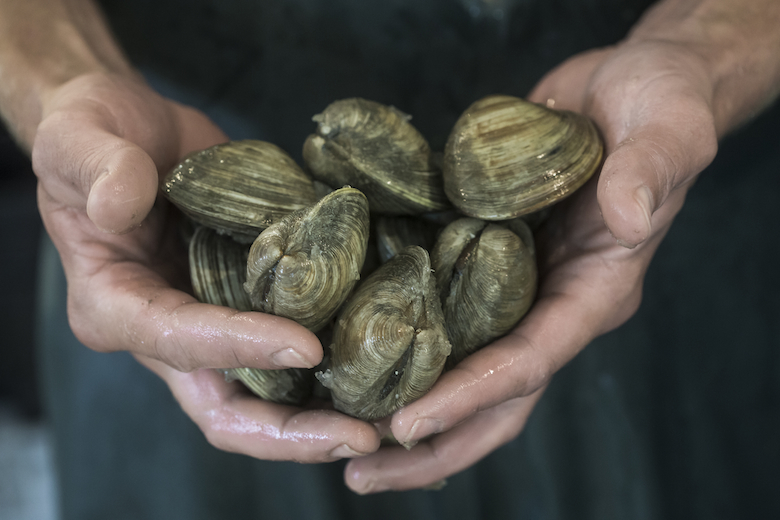 Autumn is the time for baking pumpkin pie, apple picking… and deploying clams? The leaves may be changing colors, dazzling us with their natural splendor, but ocean water, fouled by algal blooms such as brown and red tides, deserves to be restored to its healthy, blue clarity.

The Shinnecock Bay Restoration Program (ShiRP), on a mission to revitalize a deteriorating ecosystem, seeks to restock clam populations this fall as water temperatures drop. Starting mid-October and ending in early November, volunteers can help place clams into the bay’s “spawner sanctuaries.”

Numerous factors, such as overfishing, pollution, and climate change, have caused the shellfish populations to dwindle. Clams, oysters, and mussels clear up pollutants and boost water quality through filter-feeding. As the maids of marine conservation, each clam purifies about a gallon of bay water an hour. Installing hard clam sanctuaries stimulates shellfish reproduction due to their high densities.

Founded in 2012 by the Stony Brook University School of Marine and Atmospheric Sciences and its Institute for Ocean Conservation Science, ShiRP consists of students and scientists who frequently document the quality of the water and conduct baseline studies. After all, the ramifications of contaminated bay water could prove to be extensive. Not only would the marine and terrestrial ecosystems be in jeopardy, but so would the health of humans. For example, consuming a contaminated fish could cause a serious illness such as paralytic shellfish poisoning.

If you want a flourishing East End ecosystem, you can lend a hand and make a difference by filling these clam sanctuaries. Join other volunteers in turning the “Brown Tide Blue.” Trips leave from East Quogue and take around 2 hours. The schedule is as follows:

The goal by the season’s end? To reach the two million mark. If this goal is met, volunteers will have placed as many clams into the bay in 2016 as it took for them to do in 2013-15 combined.

For more information on the Shinnecock Bay Restoration Program, please visit their website.