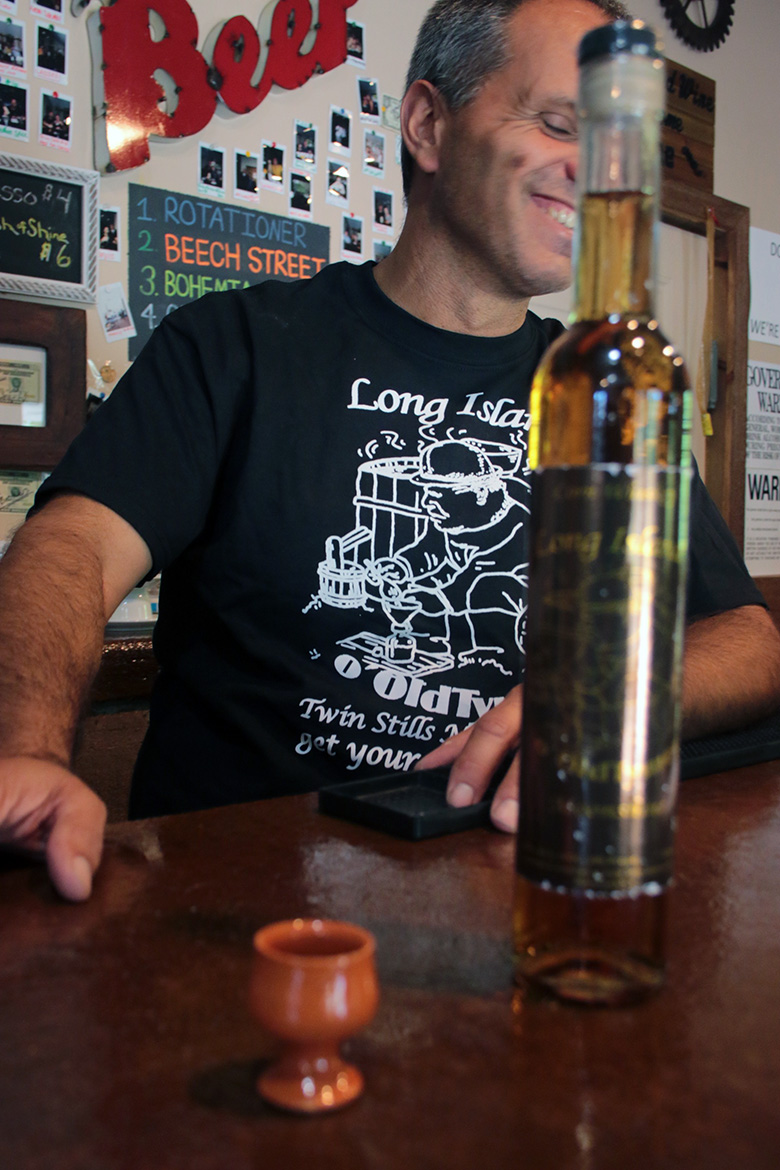 What do you think of when you think of moonshine? An earthenware jug? A still out in the middle of the woods? Something that maybe you’re not sure you want to drink?

Well then, you’re in the minority compared to the crowd that’s been showing up each weekend and during the week at Twin Stills Moonshine on Sound Avenue in Riverhead. There in the back, Joe Cunha runs his copper pot still each morning to turn corn grown on the North Fork into a spirit with its own character.

The corn, from Sujecki Farms in Calverton, arrives by the bushel (a 50-pound sack) already dried and cracked. One bushel will yield about 12 gallons of moonshine. It’s then bottled by hand in 375 milliliter bottles with different flavors and varying degrees of proof.

(Cunha puts a percentage of malted barley in his closely guarded recipe. The addition helps bring out the sugars in the corn, he says.)

“Apple pie is by far the most popular,” says Cunha. At 50 proof this moonshine can’t do that much damage, nor is it too sweet. You taste the apples first and then the baking spice flavors cleanse your tongue.

Also for sale is pumpkin spice, a necessity this time of year; honey, which is made with local honey; mixed berry and strawberry (mix the berry with cola and it tastes just like Dr. Pepper, says Cunha); coffee, which he says is not for everyone. I liked it. It tasted like chewing on coffee beans, which reminds you that coffee is a plant. “Put it in espresso,” says Cunha.

Twin Stills also makes a moonshine aged in American white oak with whole coconuts (cracked into smaller pieces); Cunha says he has a hard time keeping it in stock. You must like coconut to like this.

The moonshine tastes of the sun.

But the best way to get the essence of moonshine is to taste Twin Stills’ unflavored, un-aged 100-proof corn whiskey.

According to federal law, corn whiskey must have at least 80 percent corn in the mash, which is fermented grain. (All spirits are made by distilling something fermented, like wine.) One can make vodka from corn, but it must be distilled enough times to render it “without distinctive character, aroma, taste, or color.” Cunha’s copper pot still does not produce vodka.

As an experiment, try Long Island Spirits LiV vodka, made from potatoes, next to Twin Stills corn whiskey. Both have a slightly viscous mouthfeel, but LiV has an earthy essence, while the moonshine tastes of the sun.

Like many producers of artisanal foods and beverages on the East End, Cunha is on his second career and is reaching back to his ancestry to create something he knew growing up. His family’s from Portugal where distilling was as much a part of life as was making wine. The Long Island native learned how to run a still during summer visits in the country’s north. Now he and his wife, Patty, are happy to make just enough moonshine to keep the tasting room stocked and supply a few local retail shops and restaurants.

Don’t ask why or too many questions. Hanging on the tasting room wall is a sign that says “Don’t Ask. We’re Not Telling.”

Interacting with his customers is enough. “It’s’ a lot of fun,” he says. “The nice thing is all the wonderful people you meet. People from all over the country. People from all over the world, from England and Russia. Tourism on Long Island is that big.” The conversations often lead to similarities. “I start asking, and everyone has a little story about their country. Like the Italians and their grappa.”

Twin Stills in open Thursday through Monday, and has live music on the weekend. They also serve mixed drinks made with moonshine and local beer on draft. Tastings include three flavors for $9. Shots are $5.