Miranda Sannino will be able to combine her loves for science and art at Cornell University with aid of $3,500 grant. 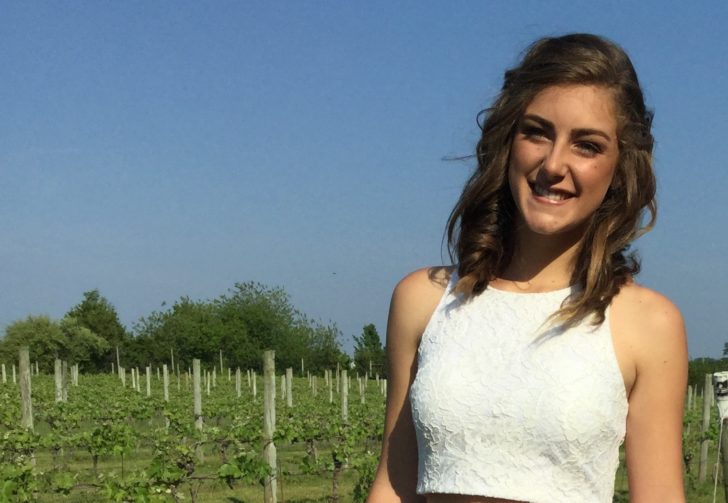 In the inaugural year of donation, the Long Island Merlot Alliance has awarded its first viticulture and enology scholarship to Cutchogue resident Miranda Sannino. Sannino, 18, is the daughter of Anthony and Lisa Sannino of Sannino Bella Vita Vineyard in Peconic. She is currently in her first year at Cornell studying viticulture and enology, one of six in her class with the major. “As you progress you can choose your concentration,” she says, whether you want to work in the vineyard or become a winemaker or get into the business side. She has already talked to a recent grad of the program who now works for Gallo. “I could make my own label or follow my family’s label or kind of run with it.”


Sannino’s been helping out in the vineyard since her family moved to Cutchogue in 2006 when she was in third grade. “We moved out in summer,” she says, “and were there for the first harvest. To pick grapes from our own land, that was really great.”

The curriculum at Mattituck High School, from which she graduated in the spring, helped set her up to study at Cornell. She took AP biology and chemistry as well as the pilot environmental science class. “That was the best class I ever took,” she says. “We had an indoor lab and grew things hydroponically and got to experiment with lights and fertilizers.” Sannino’s older sister is studying business management and sommelier service at Johnson and Wales.

The $3,500 scholarship was funded by private donors and an event held on April 24 at Wölffer Kitchen in Sag Harbor.

Sannino heard about the scholarship from her father, who is friendly with Juan Micieli-Martinez, the president of LIMA, she says. “I applied the day the application came out.”

Amy Zavatto, executive director of LIMA, said the pool of applicants was commensurate with the first year of the gift and pointed out Sannino Bella Vita is not a LIMA member. (For info on how to apply for next year, click here. The scholarship is open to all students in Suffolk County between the ages of 18 and 25.)

“I’m, really looking forward to the internship and getting hands on experience with winemaking,” says Sannino, adding that last summer she worked at Sparkling Pointe and helped with bottling. “All wines are so different,” she says. “That’s what makes it so interesting. It combines science and art, and those are my two favorite things.”

Sannino will be coming home for the vineyard’s harvest and harvest party over Columbus Day weekend.