A bill signed into law earlier this month by Gov. Cuomo allows wineries and farm wineries to fill vessels no larger than four liters with their wine. 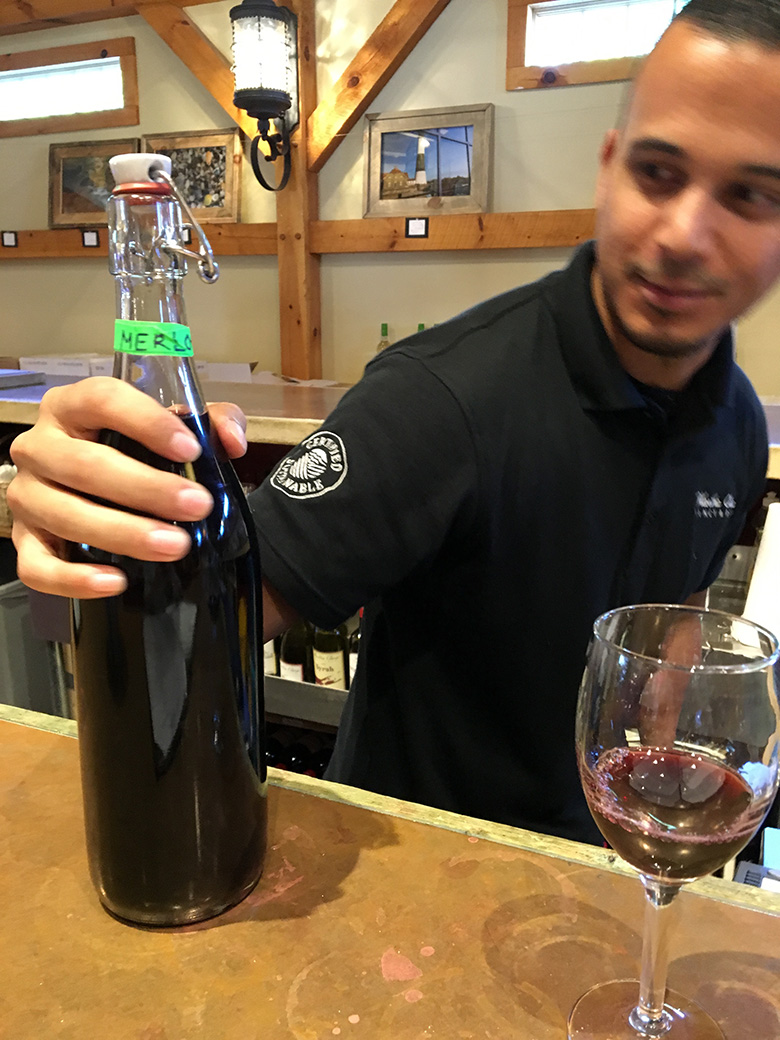 Martha Clara is considering using these one-liter bottles as growlers for their wine.

Many years ago I visited Bordeaux to check out the food and wine scene. One day in St. Emilion, after visiting a 1,000-year-old church where a funeral was being held for a local cooper, I stopped in a (what’s the French version of a bodega?) to get a couple of bottles of water. In a back corner of the store was wine for sale in spigoted casks. Customers brought their own bottles.

We ran back to the car, grabbed some empty water bottles and bought what we thought was some pretty good merlot for a couple of francs. (I told you this was a long time ago.)

Now we, residents of New York State, can do the same thing, as long as the bottle is no larger than four liters and has a cap. In other words, you can now buy wine in growlers.

The change in the law is part of Governor Andrew M. Cuomo’s five-year effort to simplify the state’s liquor laws, which contained arcane language, weird inconsistencies and a lot of headache0inducing regulations that were essentially holdovers from the laws created after the repeal of Prohibition.

Another new law — which will affect our local wineries, cideries, distilleries and breweries — permits the sales of all products by entities with farm winery, cidery, distillery and brewery licenses for on premise and off premise consumption. So in addition to getting a local beer at, say, Twin Stills Moonshine, you can also buy a six pack of Greenport Harbor Leaf Pile to take home, provided they have it in stock.

The winery best set up to take advantage of growler sales is Martha Clara Vineyards in Riverhead. Currently Juan Micieli-Martinez, winemaker and general manager, has eight taps going in the tasting room that offer a rotating selection of Martha Clara wines. Currently visitors are able to buy the wine by the glass or carafe to drink on the porch or on the patio. Or try the “Sustainable Flight” which is comprised of five of the wines on tap, that range from a rosé to an oak aged merlot. Sustainability was one driver for the law, which Micieli-Martinez appreciates. Wine on tap precludes the need for bottles, labels and closures. And consumers can save themselves from creating more garbage and more trips to the dump.

The winery best set up to take advantage of growler sales is Martha Clara Vineyards in Riverhead. Currently Juan Micieli-Martinez, winemaker and general manager, has eight taps going in the tasting room that offer a rotating selection of Martha Clara wines

Micieli-Martinez was still thinking about how to offer wine in growlers. His preference would be one-liter bottles shaped like wine bottles with an attached stopper. He also would like the ability to mark up the growlers with details like alcohol content.

This isn’t necessary says Bill Crowley, director of public affairs for the New York State Liquor Authority. Wine sales in New York State are solely governed by the state. The Alcohol and Tobacco Tax and Trade Bureau does not weigh in on the definition of a growler, although it attempted to in 2014. The ruling was suspended. Producers will choose how to sell the wine in regard to volume or vessel; a standard, like the 64-ounce jug for beer, is likely to emerge.

“It’s been a fantastic addition to our ability to sell wine, especially as a small producer,” she says. She adds that growler sales, and wine in kegs, allows her to compete with international conglomerates for her wine to get a placement as wine by the glass in restaurants. “With packaging, it’s hard to keep a bottle of wine under $10, $15,” she says. The lack of packaging, namely the bottles, is also a tremendous benefit to the winery’s goal to be carbon neutral. Shipping heavy glass to and from the winery is expensive, as is storing it in temperature controlled rooms. Kegs take up much less space and are refillable.

Michelle Kaufmann, communication manager for Oregon Wine Board, said her the board and its sister organization, the Oregon Winegrowers Association, which also played a big part in passing the bill, have not tracked the sales of wineries taking advantage of the program.

A recap of the new laws is below. Included is the ability for consumers to take home unfinished bottles of wine from tasting rooms, as is permitted in restaurants.

On September 13 he signed the bill allowing the sale of all farm licensee products in all tasting rooms.