Chef Jason Weiner at the Watermill Center is just the sort of art this world needs. 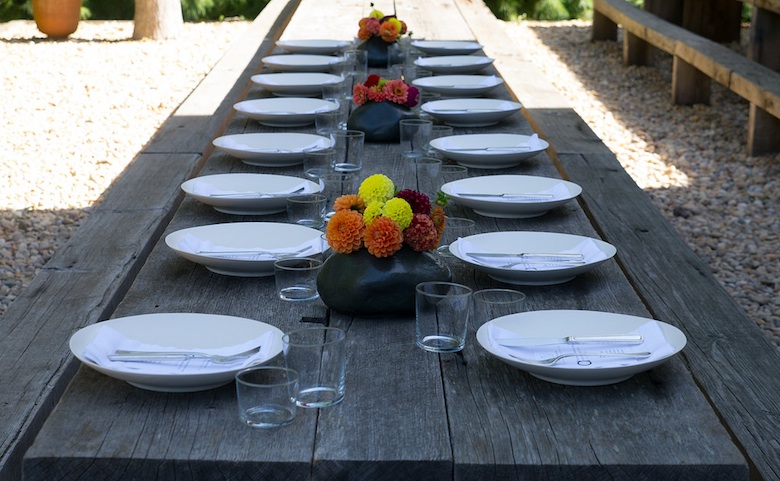 At the Watermill Center, an “interdisciplinary laboratory for the arts and humanities,” brunching has become an art with their successful International Brunch Series. This exclusive event brings performance, visual, and culinary arts together, and there’s still a short window yet to score tickets to the final one of 2016, scheduled for noon on Sunday, September 18.

Beloved East End chef and restaurateur Jason Weiner of Almond and Zigmund’s Bar in Bridgehampton (among two other ventures, Almond in Manhattan and L&W Oyster Company) headlines the cooking category, sharing the spotlight with local farms, growers, and purveyors of fine goods. Among that pedigreed list are names like Quail Hill Farm, Pike Farm, Browder’s Birds, Milk Pail Orchaird, and Mecox Bay Dairy, all of whom will be showcased in fine style on a creative menu that’ll be served family-style.

The meal you’d be signing up for starts with a Caesar-style Brussels sprouts salad, followed by a cauliflower and leek frittata and house-made pickles served with buttermilk biscuits and house-smoked bacon. To conclude: baked apples with a dollop of creamy ricotta and sweetened with honey.

However, at this brunch, it won’t just be the food that shines. Before the meal, you’ll be treated to a special presentation by Tori Wranes about a new performance she’s hard at work developing during her residency at this arts center. This vocalist and artist is known for combining voice and sculpture in the field of performance, using sounds, instruments, costumes, props, architecture and more to “deform her appearance” and “create new dreamlike constellations.” As such, she reinterprets everyday objects as “small adventures,” such as that of a troll singing into its own tail, only to have her voice come out of a rock pendulum held over her head, as she did for the 19th Biennale of Sydney in 2014.

That’s not all, though. Modern choreographer and dancer Alvaro Restrepo—along with his students from El Colegio del Cuerpo, a school located in a neighborhood in Colombia once home to runaway slaves—will be giving a powerful and moving performance with members of the Shinnecock Nation. This will be based on a massive ceremony he created back in 2010 in his native South American homeland, which was centered on honoring the victims of internal displacement. Called INXILE The Trail of Tears, it meditated on themes that are even more relevant today: refugees, displacement and loss. This performance was so well received that the company was asked to join in a TEDx Talk at Sadler’s Wells while they were overseas in England.

Now, during their residency at The Watermill Center, they’ll be bringing this experience right here to the Hamptons in a special hour-long performance.

Together, all of these components make this brunch a multimedia performance art not to be missed.

Tickets will be sold up until 6 PM on Wednesday, September 14, so rally the troops and reserve yours—they’re in limited capacity.

Cost: $75 per person, plus a nominal service fee via Eventbrite. Click here to purchase.