A Pilgrimage to the Birthplace of Paella

In Valencia, a rice-centric culture with respect for the past and an eye to the future. 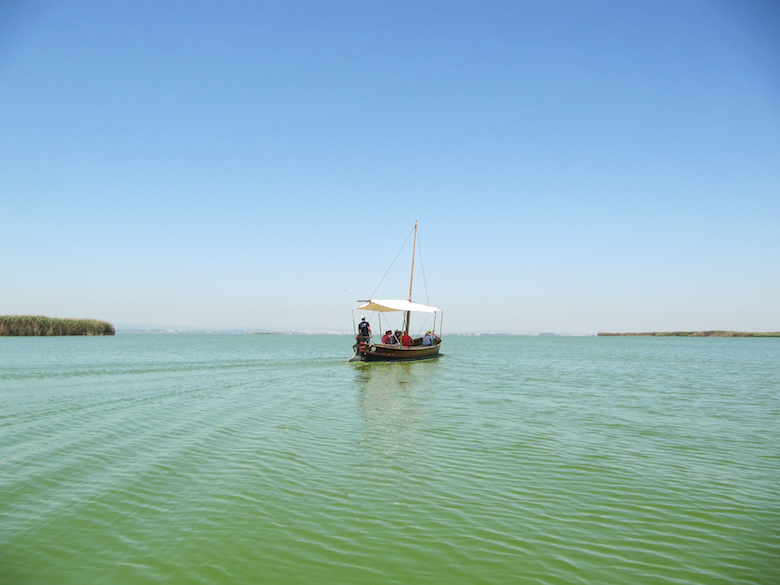 To stir the rice, Carmen Verdeguer walked around the wide, flat pan set just above the bonfire, wooden spoon in hand. Nearby, at the edge of my native Swiss Alpine forest, men and women stood, cheering. I was 10 and I was spending that Sunday with my Spanish friend, Joachim Verdeguer and his parents. That first paella and the extraordinarily convivial atmosphere remained forever etched in my memory.

Which may explain why last May, I found myself in Valencia, Spain, the birthplace of paella, chatting with a taxi driver about rice. When he declared he owned a rice field in the Albufera National Park, only 15 miles away, I was hooked. I set to explore the century-old paddies that sprout along the largest lake on the Iberian Peninsula, a region where herons and egrets dance in the breezy Mediterranean air.

“My grandfather used to swim in the canals,” said Juan Antonio Muños Fuentes, stocky and mustachioed, as he gestured toward the flat turquoise terrain surrounding his bright-white hacienda, now the headquarters of Tartana Rice, the family company. Seated at breakfast under the shady porch, I surveyed a rare aquatic landscape dotted with emerald-green strands stretching their grainy promise toward the blue sky.

During Roman times, the Albufera Lake was 10 times larger than it is now. And at the start of the 20th century, its mysterious waters prompted author Vicente Blasco Ibañez to write in his novel Reeds and Mud, “A tangle of dark, gelatinous grass-like viscous tentacles came up from the bottom of the lake.”

But the harsh, muddy reality of rice farming in the 20th century, with its constant struggle between fishermen and the farmers who kept pouring soil to gnaw at the lake, has given way to a peaceful, stunning region where gourmand travelers are welcome, rice rules as the main course and new generations embrace their family endeavors. “We keep our ancestral heritage,” said Juan Valero, a Tartana Rice fifth-generation co-owner, “but with modern techniques.” 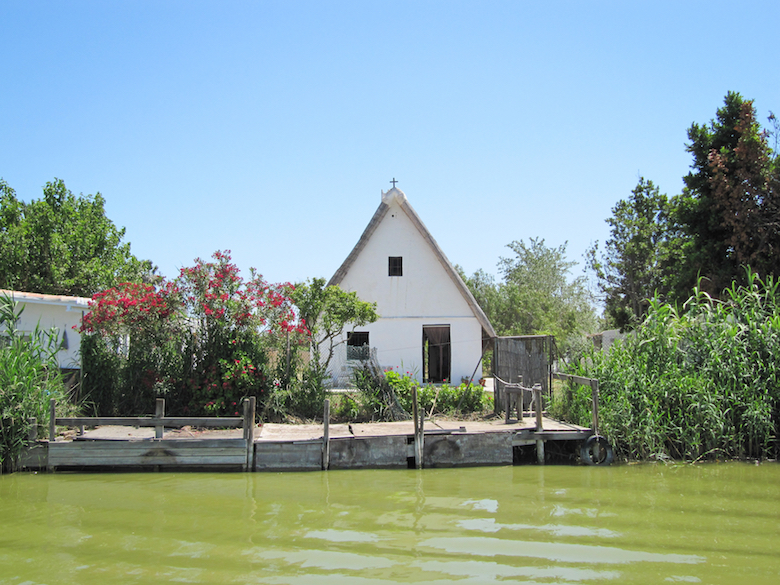 Seeking the authentic rather than the modern, I headed to the tranquil town of El Palmar, an ancient fishermen’s hub turned paella-central where my childhood friend Joaquin—now flaunting a halo of grayish curls around his chiseled face, introduced me to Josep Rostoll Fuentes. A history student who runs boat tours, Josep explained that his family had enjoyed fishing privileges since the 13th century. Herons soared as we glided through rows of rustling reeds. And when the channel opened onto the lake, flocks of migratory birds fled in the morning light. “Barracks,” traditional straw-roof huts, stood undisturbed along the banks, while old men fiddled with nets.

Lunch at the well-named Bon Aire Restaurant started with local all-i-pebre, stewed eels with potatoes lounging in a garlicky broth. We spent the early afternoon (in Spain, no one eats paella for dinner) spooning our way through a delicious expanse of rice dotted with morcilla (blood sausage) and young garlic.

The next day brought a serious lecture on rice, courtesy of Santos Ruiz, director of Arroz de Valencia, the official “Appellation of Controlled Origin.” As he described the local Bomba, Albufera and Seña rice varieties, I wished I could come back for the monthly cooking classes he leads at the Escuela del Arroz (the Rice School).

“Paella is all about the grain drinking the broth,” he said. 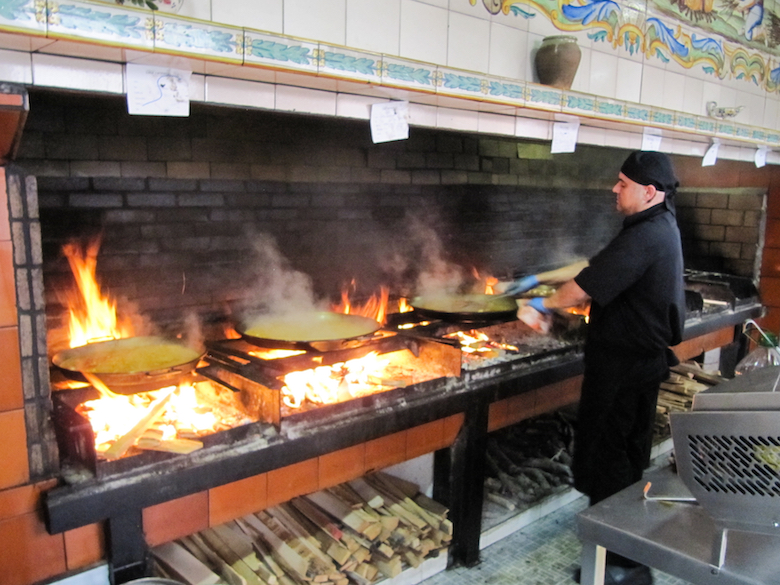 But later at the modern Paradores Hotel in the middle of the Devesa dunes near El Saler Natural Park, it was all about golf. I dodged the balls and walked through the dunes to the magnificent and deserted beach. Unfortunately, I was off-season for the nesting turtles, but between the cry of the seagulls and the trail of iridescent shells along the shore, nature, clearly, still ruled the area.

Back in Valencia later in the week, I popped into the Museum of Rice, a renovated mill where you can track the process between husked seed and edible grain. Three floors dedicated to rice and I was starving again, so Audrey Le Crom who manages imports for LaTienda.com, an American mail order company that brings Spanish goods into the United States, took me to El Famos restaurant. There, we hung out in the kitchen, mesmerized, as the cooks fed the wood fire under each pan. The aioli served with that paella was the best I ever tried, a blend of garlic and pleasure. 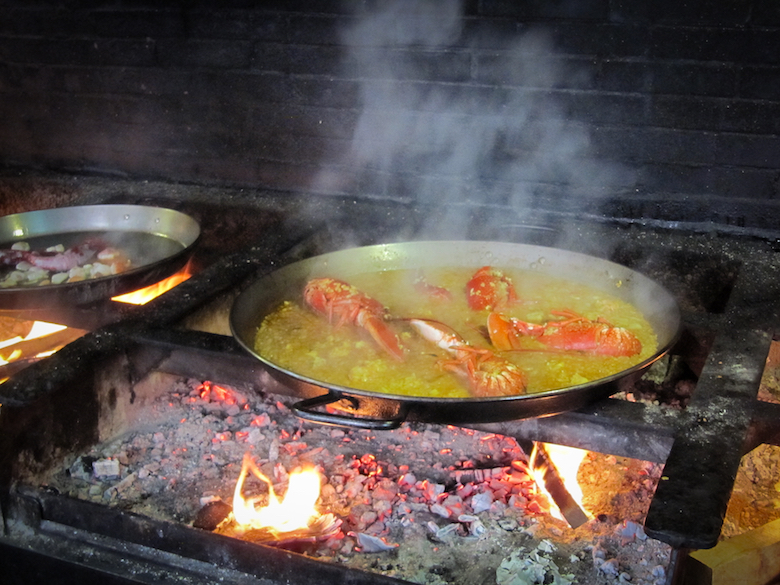 Paella cooking on a wood-burning stove.

After a morning on the beach, Joaquin and I met at Casa Carmela near Vicente Blasco Ibañez’s house, now a museum. “Do you have a toothbrush so we don’t look like pirates?” joked Joaquin as we ordered arroz negro, rice cooked in squid ink, one of the many other regional rice dishes I craved. We savored every bite, from the moist center to the crunchier grains along the rim.

My last day there, I headed to the glorious Art Nouveau covered market, losing myself among rows of massive jamón hung high above the stalls, but down on the floor, while shoppers just saw massive bins reading “Albufera rice,” I felt a maritime breeze carrying twirling herons.