These donuts are so good you’re going to need to brace yourself for Homer Simpson sightings in Sag Harbor. 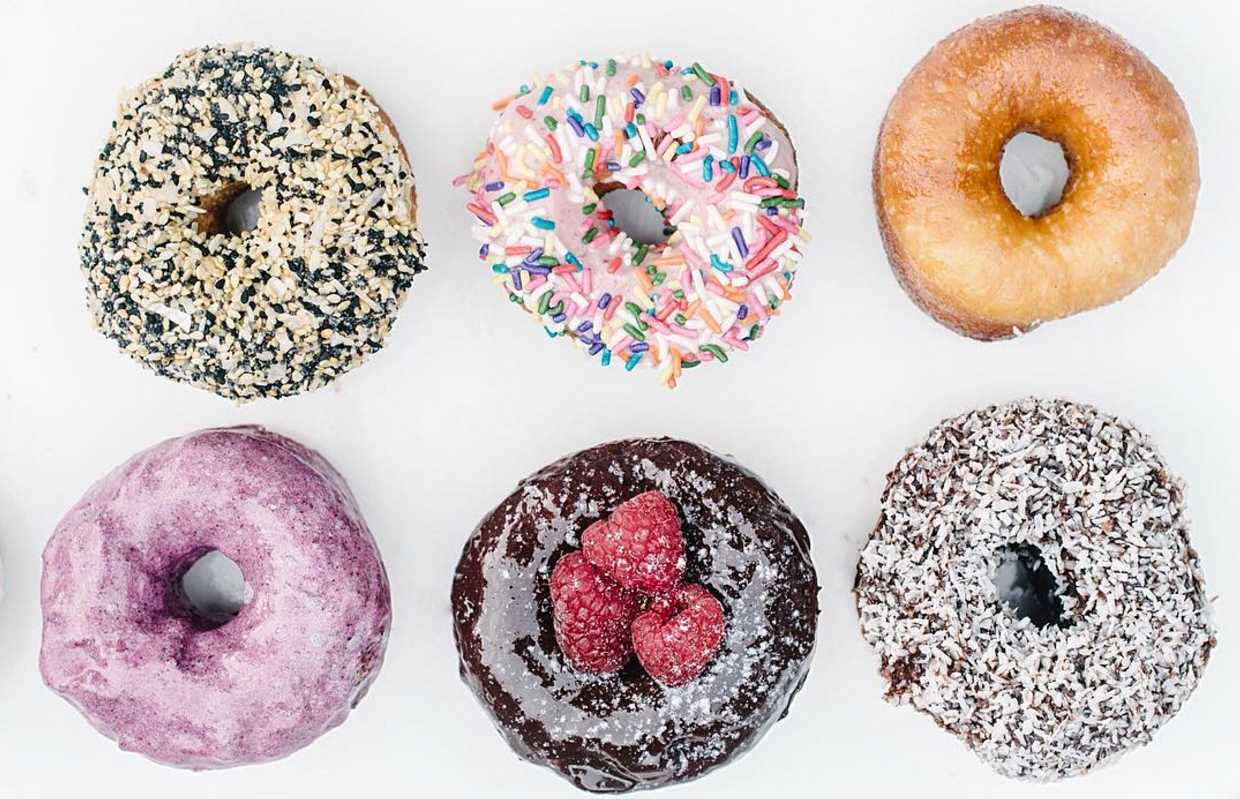 Grindstone’s donuts are proofed for 48 hours and baked every 30 minutes, and served as Everything, Sprinkles, Blueberry, Lemon Poppy and Vanilla Glaze

We had the fortuitous, small town experience of being at the wharf-end of Main Street in Sag Harbor at the precise moment when Grindstone Coffee & Donuts threw open its doors to the eating public. Not unlike when Willy Wonka opened up for his much-anticipated viewing, except instead of chocolate rivers there is non-brominated flour, made with local eggs and milk, proofed for 48 hours and then shaped into small-batches cooked every 30 minutes and topped with 6-8 toppings in any given batch.

“Hello everyone,” shouted Michael Symon, the memorable food television star of ABC’s The Chew. “This is our soft opening. All the donuts and coffee are free for today.” We jumped to the front of the line, which quickly snaked down the street. “Are they open? What’s going on?,” someone asked. “This is the first day. The donuts are free until they run out,” a stranger replied. “No way!,” said the first. “This is once in a lifetime. I’m getting in line.”

The brioche-style donuts are made fresh throughout the day with locally ground flour from Amber Waves Farm in Amagansett, and come in such “whimsical” varieties as blueberry lemon, chocolate with toffee popcorn and peanut butter mousse with chocolate. Truth be told, we are more of a cake donut sort of person, like the heavy little things you get from Doughnut Plant in New York City or from Doughology on Long Island. But fresh-made donuts–like the sort you used to get from Dreesens in East Hampton, or you can still get at the Milk Pail–are rare and marvelous things.

This is the first solo-project for owner and donut maestro Kyle Shanahan, who grew up learning the food business from his mother and stepfather, restauranteurs Liz and Michael Symon. Grindstone is Shanahan’s first solo project with partner Anna Coffman. And they have already attracted fans far and wide in the food world—whether on the East End or in Gotham.

Needlesstosay we’ve been back since the soft opening. The donuts are good and flavors make you smile. But the coffee—from San Francisco-based Four Barrel Coffee—is an extra treat. It’s strong and well-made: a new contender for best cortado on Main Street.

Here’s the opening captured in a few Instagram posts.

Thank you #sagharbor for an amazing opening week! We’re proud to be a part of such a wonderful community. #grindstonecoffeeanddonuts #fourbarrelcoffee #hamptons #donutworry

We were on-site for the milestone event.