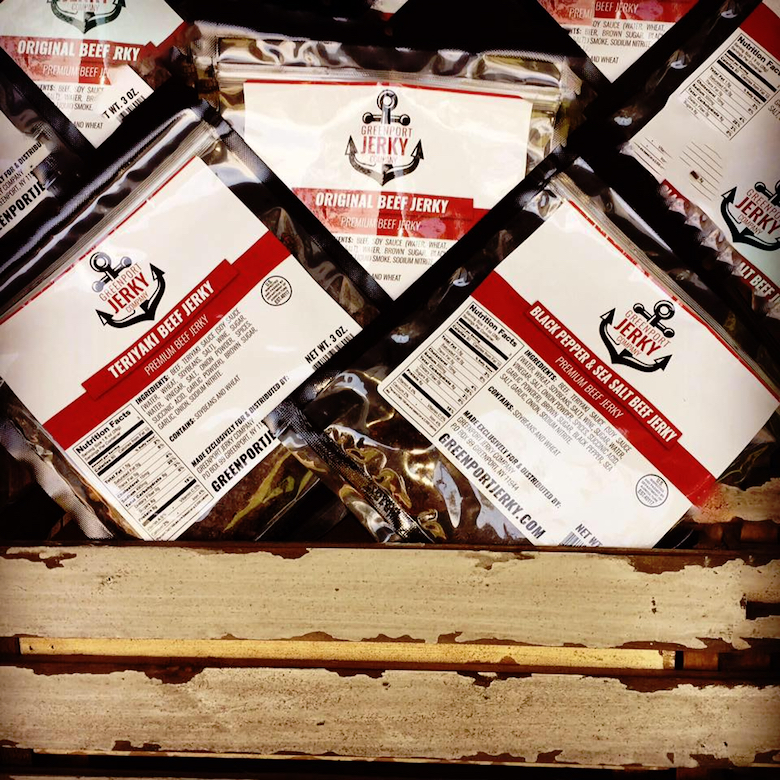 I’ll be up front about this: Carolyn and Vinny Macchirole have been close friends of mine for more than a decade, but the jerky obsession? I had no idea it was this serious. I also had no idea that jerky could be so good.

“We started getting into jerky years ago with road trips,” Carolyn tells me. “We were picking up jerky in wherever we went because it is a great snack for the car. All you need is a couple of pieces and you’re satisfied. It doesn’t spoil or get all over the place. And it’s good.”

It turns out to be a fortunate obsession for the rest of us. The Macchiroles – both North Fork natives who recently sold Gateway Marine in Flanders which they had owned and operated since 1987 —  took the search for excellent jerky so seriously that they started playing around with cuts and marinades, and using a dehydrator and the oven at their Greenport home to make their own. Their homemade jerky was so good, they decided that the East End needed its own signature jerky to fuel seafaring folks (Vinny Macchirole continues to work in the marine business as a licensed captain, doing new boat orientations, lessons and private charters), cyclists and tourists.

So Greenport JERKY Company came to be. 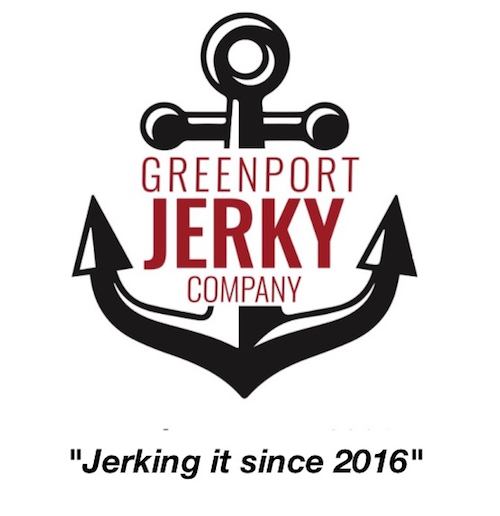 This is not your run-of-the-mill jerky. If you’re like me, you only associated beef jerky with those chewy, salty tubes you find at convenience stores. But a little investigation reveals that Slim Jims are to beef jerky what Velveeta is to cheese.

Back in the days before refrigeration, ancient peoples found that dried meat lasted a lot longer than fresh.  When you eliminate the moisture, you prevent decay. There is evidence that the ancient Egyptians made jerky. When the Spanish arrived in the Americas, they saw the natives drying meat to preserve and it is said that the term “jerky” derived from the Native (South) American Quechua term “ch’arki” (which means “dried meat”). The Spanish thought it was a genius idea and took the technique back to Europe with them.

Real jerky is made of thin sliced (and sometimes pounded) meat, seasoned and dehydrated, not smoked.

“This is not the kind of jerky you get at a gas station,” says Vinny. “This is hand-sliced, handcrafted top cut brisket, trimmed of all the fat. It is rubbed or marinated then spends around 24 hours seasoning. Then it goes in the dehydrator.”

Depending on the amount of dehydrating, you will have a more tender or more sturdy chew. I experience this immediately as Carolyn has me taste their different jerky flavors. The original – Vinny’s favorite — is much drier and more dense than the others; this is the jerky you can imagine Native Americans and cowboys keeping in their packs for long trips on the plain. The revelation comes in trying the other flavors like for example, IPA jerky, which is a little sweet, has a more smoky flavor and is tender; whiskey, which has a honey mellowness and a peppery bite; real Western which has the ϋber-beefiness of bison and a slight citric finish; and the habanero, which has plenty of heat, tempered with a brown sugar sweetness. They are fun to taste, because you chew for so long you really have a chance to savor the flavors.

They are also filling, which is part of their charm.

“It’s a low-fat, high protein snack,” says Carolyn. “A lot of weight trainers and athletes eat it because it is so healthy.”

Greenport JERKY Company products just became available in May, but took off instantly. I may have friends in the business who let me taste, but now you do too. You can find them – and sample some of the flavors – at the Greenport Farmers Market on Saturdays 9 am – 1 pm; North Fork Table Farmers Market on Fridays from 9 am – 12 pm until Labor Day; and every other Thursday at Riverhead’s Alive on 25 street fair. It is also sold at shops around Greenport and Southold, plus Martha Clara Vineyards in Riverhead. Greenport Fire carries the full line of 11 beef jerky flavors, while Southold Fish Market carries all four fish jerkies (salmon or ahi with teriyaki or peppercorn). You can go to their website to order; it has become a popular item for boaties docked in the marinas around town.

“Going forward we want to use local flavorings and so we are talking about using local beer, wine and sea salt for new flavors,” says Carolyn. “But first we wanted to launch the product and see how people felt about it. Now we have all winter to decide who to partner up with.”