A Change is Gonna Come

It’s getting warmer, and for wine on Long Island, that’s a good thing.

“If you do not change direction, you may end up where you are heading.” —Lao Tzu

It’s rare when a day goes by without another story about the possible consequences of climate change. Many world leaders have called it the greatest challenge of our time. The CIA predicts climate change will be the greatest destabilizing factor affecting U.S. security. Here on the East End, many of us would just like to know what climate change will mean for us and our way of life. As a winemaker, I understand climate and soil are the two most important factors in a wine region’s terroir. So what kind of changes can we expect?

In 2011, climate scientists at Stanford University looked at how change would affect the California wine industry. They reported that by 2040 the average temperature in Napa could increase as much as 2 degrees Fahrenheit, which could reduce by 50 percent the amount of land suitable for cultivating premium wine grapes in Northern California. They went on to state that “as much as 81 percent of premium wine grape acreage in the country could become unsuitable for some varieties by the end of the century.” 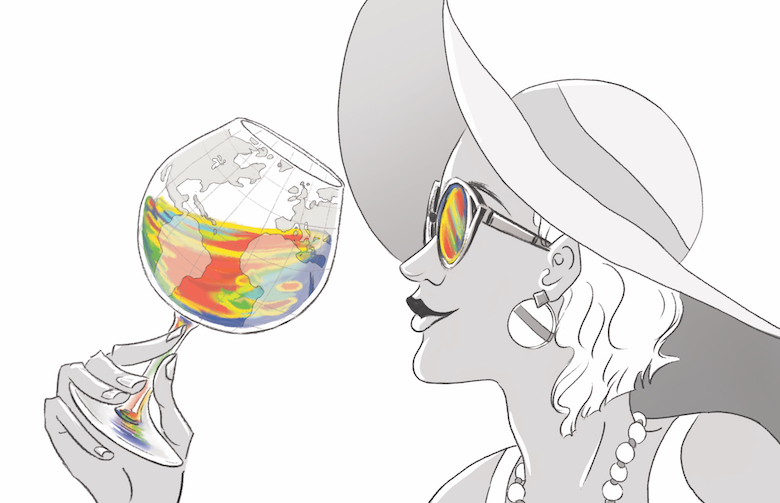 The first worldwide scientific analysis regarding climate change and wine production was completed in 2013 by Conservation International. Their key finding: Climate change will dramatically impact many of the most famous wine-producing regions in the world and prompt the opening of new areas to wine production. “The fact is that climate change will lead to a huge shakeup in the geographic distribution of wine production,” said Lee Hannah, a senior scientist at Conservation International. The study forecasts sharp declines in wine production by 2050 in Bordeaux and the Rhône regions in France, Tuscany in Italy, California’s Napa Valley and in Chile, because it will be too hot. Dr. Hannah predicted quality wine production would increase in places like northern Europe, Britain and the East Coast of the U.S. and that wine regions would develop in areas once considered unsuitable.

Dr. Hannah predicted quality wine production would increase in places like northern Europe, Britain and the East Coast of the U.S. and that wine regions would develop in areas once considered unsuitable.

While most of the past research has centered on warming temperatures, the hot topic today is all about water. Just this past year, research led by Dr. Ben Cook of NASA’s Goddard Institute for Space Studies at Columbia University confirmed that climate change is diminishing an important link between droughts and the timing of wine grape harvests in France and Switzerland. “Wine grapes are one of the world’s most valuable horticultural crops and there is increasing evidence that climate change has caused earlier harvest days in this region in recent decades,” said Dr. Cook. By looking at wine grape harvest dates from 1600 to 2007, Dr. Cook and his colleagues discovered harvest times began shifting dramatically earlier during the latter half of the 20th century. Early harvests from 1600 to 1980 occurred in years with warm and dry conditions; from 1981 to 2007 earlier harvests occurred in years without drought. Their research showed that in the past, you’d only get a warm season when it was dry, but now, warm conditions exist whether it is dry or wet. Whether high-quality wines can be produced during these warmer, wetter seasons remains to be seen.

This past winter I spent some time looking at rainfall data on the North Fork. (Get ready to geek out.) The information I found went back to 1938. Average monthly precipitation from March through October held fairly steady at a rate of 28.5 inches until the early ’90s. From 1990 until last year, precipitation during this same period averaged 31.5 inches. Interestingly, the number of rain events declined while the total amount of precipitation increased. This means we’re seeing fewer storms with more rain per event. Concurrently, average temperatures rose significantly, similar in some ways to the European studies. What makes Long Island different from Europe is that our precipitation occurs earlier in the growing season; the months of August and September seem to be getting drier.

One of the first scientists to discuss the issues of climate change on winegrowing was Dr. Anthony Del Genio, a planetary physicist, who also worked at the NASA Goddard Institute for Space Studies. In 1984, Dr. Del Genio published “Earth’s Changing Climate: How Will It Affect Viticulture?” Thirty-two years ago, he wrote: “In general, regions now considered ideal for wine grapes may become too warm, while those marginally warm enough for fragile vinifera will begin to flourish. Maritime climates should be influenced the least, since the oceans will remain cool due to the partial melting of the polar ice caps.” Needless to say, he was way ahead of his time.

Now get ready to really geek out: Dr. Del Genio and his colleagues are now studying the relationship between precipitation (P) and evapotranspiration (ET). “ET” is defined as the sum of water loss from soil evaporation and plant transpiration. He describes the tension between water supply and demand as precipitation (P) versus potential evapotranspiration or PET. The emerging pattern in the Northeast is that precipitation will increase with warming, but PET will increase even faster, resulting in a net water loss. This would mean that over time our aquifer could be greatly stressed. How fast depends on how much the climate warms. Dr. Del Genio states, “If we do nothing to decrease CO2 and other greenhouse gas concentrations, we might expect 5 to 8 degrees Celsius of warming by the end of the century in the Northeast. If we can cut back emissions by a significant but modest amount, then maybe we will get half that much warming.” The message is clear: We all have to change our habits if we want to conserve our water supply.

Although Long Island will experience slightly more precipitation over the long haul, more water will evaporate out of the soil than rain will fall on it. With less frequent but more intense rain as the climate warms, more water will go into runoff and less will infiltrate into the soil where it can reach underground streams and aquifers. This makes conservation as well as changes in public policy even more important.
Warmer temperatures mean longer growing seasons and an extension of our ability to ripen late-season red grapes. This, in conjunction with a decrease in late-season rains would provide us with even more great vintages. Grape vines need less water than most other crops and are well suited to withstand long periods of drought. As our vines continue to age, root systems will grow even further into the subsoil to find moisture younger vines can’t reach. For these newer vines and for vineyards planted on very arid soil, drip irrigation may become even more important during extended dry periods.

With regard to winemaking, climate change means terroir change and subtle effects on wine style. For the time being, most of these changes will be positive; however, we have to remain mindful that this benefit may be temporary. Luckily our maritime conditions provide a buffer against the more extreme effects of climate change. As we remain a cool climate region, warmer temperatures are welcome and water is not an issue—at least for the foreseeable future. The fact is we are in much better shape than many wine-producing areas on the West Coast.

Winegrowing is a long-term commitment. With good research and accurate climate modeling, we can plan ahead. East End winemakers have made a living producing great wines in a challenging climate, and I’m quite sure we will continue. Predicting climate is a complicated process, but the work of researchers like Dr. Anthony Del Genio will help us develop new strategies and techniques. We can protect our environment, our water and our way of life while continuing to produce some of the most delicious wines in the world. Our best years, I believe, are still ahead.