The best of Shelter Island—and the forks on either side. 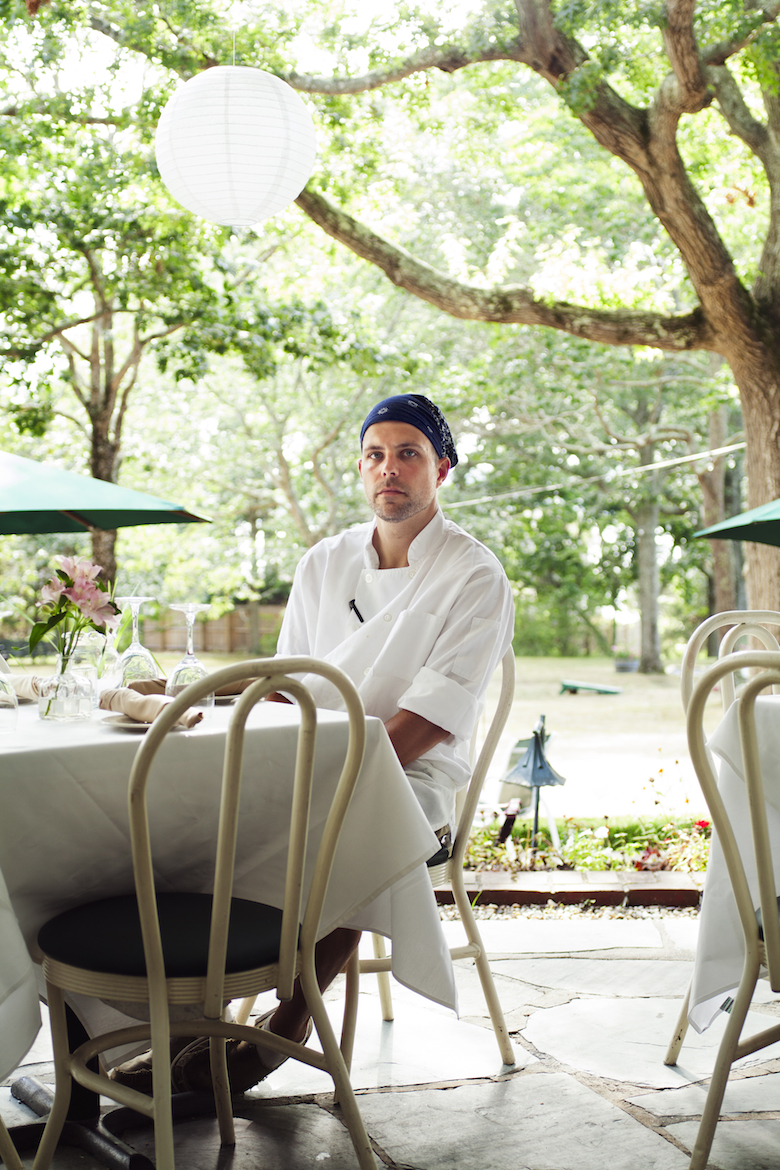 Imagine the prongs on a tuning fork. Strike one, either or both and a beautiful buzz bounds through the space in between. Similarly, between the East End’s north and south forks is Shelter Island. Spend a day exploring its winding roads and you’ll hear its quiet sort of music. There’s no better place to hear it than at the Ram’s Head Inn.

Built in 1929, the Ram’s Head has all the romance of an inn with nearly 100 years of history. There’s the dining porch that overlooks Coecles Harbor and the grand lawn that stretches out before it, the meticulously restored Harbor Hall—a spacious bar and lounge area—and the grand and beautiful entryway that stands just outside it.

The inn’s current owners, Linda and James Eklund, have owned and operated the Ram’s Head for almost 40 years, borrowing all the best from the forks on either side of them while letting their Shelter Island setting sing its unique song. The man in charge of the back of their house, executive chef Joe Smith, shares a similarly long history with the inn and employs this same philosophy in its kitchen. 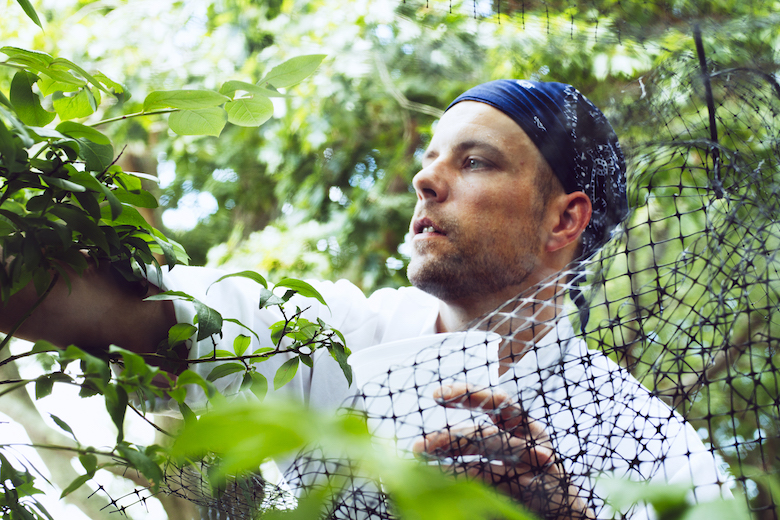 “I’ve worked for James and Linda since I was 12 years old,” says Smith, who speaks just as he cooks: with an infectious, boyish energy. “I started off washing dishes and just grew from there.”

Smith’s tenure at the Ram’s Head has not, since then, been continuous. He left for a time—as most local boys do—and settled out West, finding work at a restaurant in Santa Fe. He returned to the Ram’s Head in 1998 and has been there ever since.

“I just love it here,” says Smith. “If I want blueberries, I walk right onto our lawn and I pick them. We also have two other gardens on the island available to us. James, the owner, comes in with baskets of stuff on a daily basis.”

Smith’s summer menu reads like a guide to what’s in season. Prosciutto, peach and fennel salad sits beside Crescent Farms duck breast served with black rice, local blueberries and ginger-peach relish. If there’s ever something Smith wants but struggles to find on Shelter Island, all he has to do is take a short ferry ride in either direction. 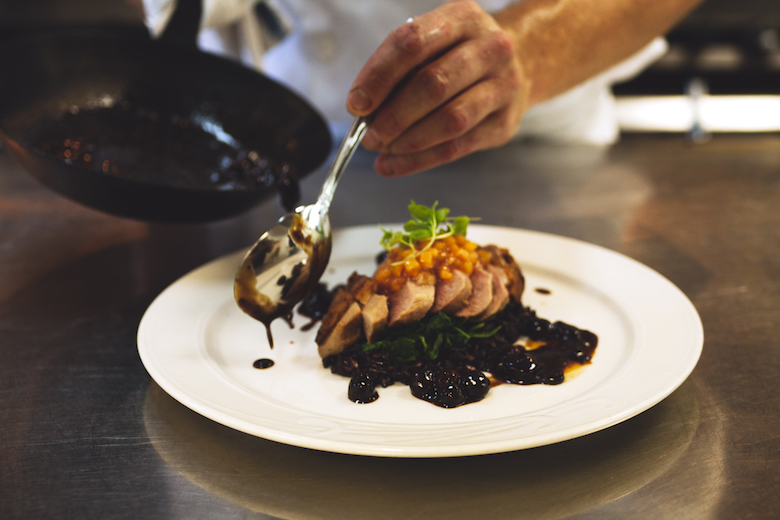 “I live in Southold,” says Smith. “Sang Lee is a mile from my house. Wickham’s is right down the block. They have the best peaches in the world. So, if I want something, I can just pick it up on my way into work. Whenever time allows, I’ll go and pick up local produce to cook with. So, for me, working on Shelter Island really lets me bring in the best of both worlds. For a chef, it really doesn’t get any better.”

It doesn’t get much better for diners either. Smith’s favorite dish on the menu—his Long Island sweet corn bisque with smoked bacon, cilantro and green chile—is a revelation. His potato-crusted halibut with ratatouille, hummus and preserved lemon is a master’s class in pairing different flavors and textures.
Smith gives most of the credit to his team.

“They’re all such good guys,” says Smith. “They all have solid experience. Nobody is really green. And I work them hard. I have to be honest, I work them really hard. Together we do great things.” 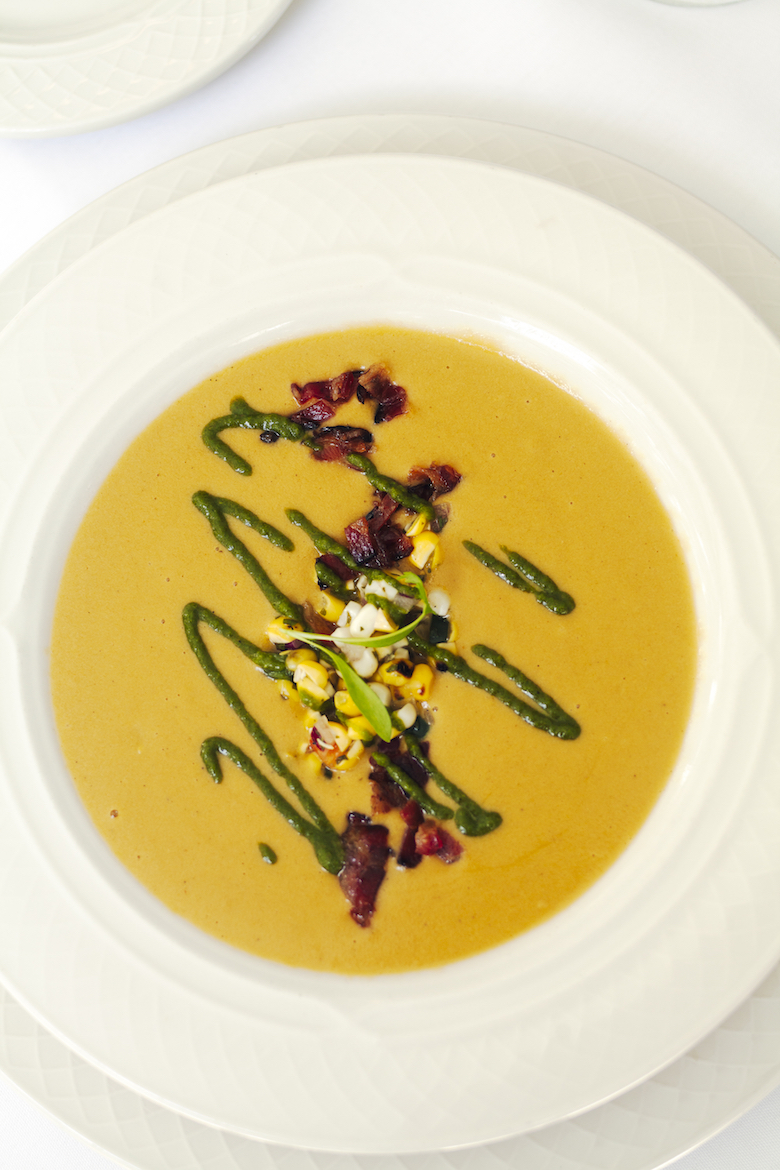 Enjoy a meal outside on the inn’s dining porch, and you’ll know “great” is the perfect word for it. You’ll know also that although the experience you’re having may remind you of others you’ve had on the East End, there’s something unique about your time at the Ram’s Head, something impossible to replicate just about anywhere else.

“It’s a mixture of the setting and the food, I think,” says Smith. “We just have the perfect marriage of the two. We work for it.” 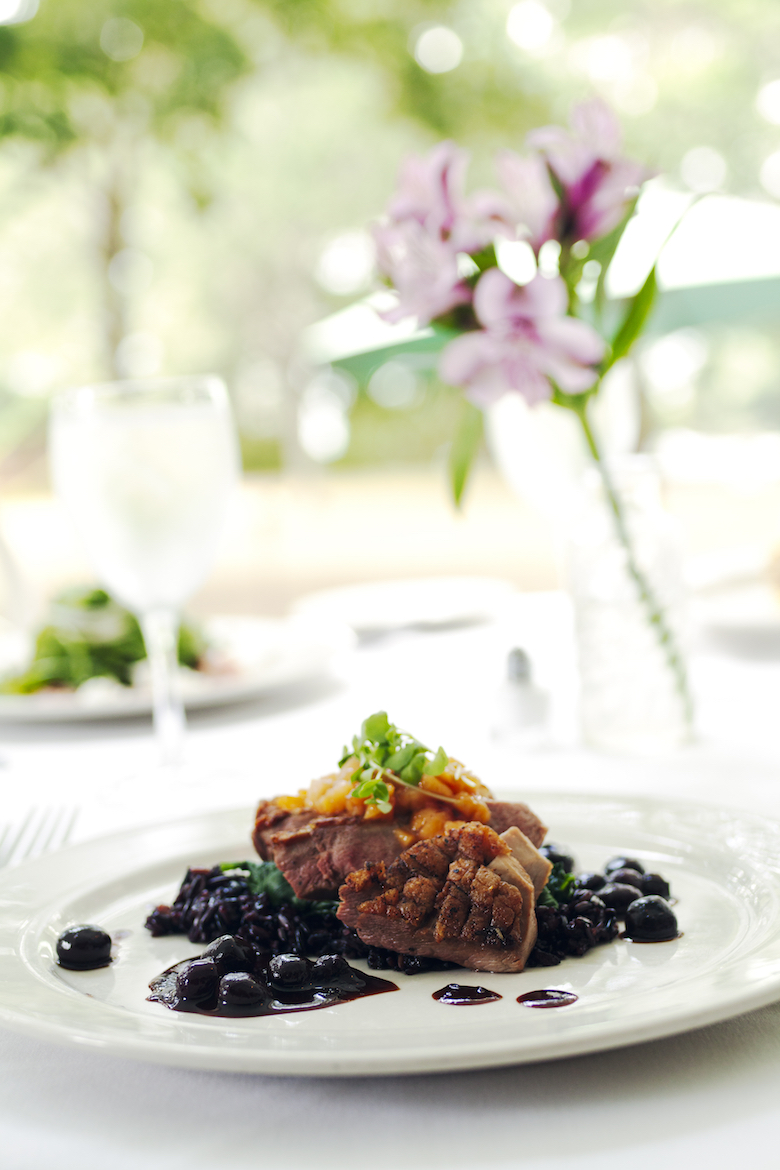 Ask Smith about his typical workday and you’ll know that work for it he and his team most certainly do.
“I usually come in by 9:30 in the morning and I leave at around 11:15 at night,” says Smith. “That’s not just me though. All of us in the kitchen do the same hours.”

It is—by any standards—a long day, but it’s also a productive one. Smith and his team daily serve brunch, lunch and dinner.

“We have a great time,” says Smith. “And then I go home to dogs that are super happy to see me, because it’s been a long time since they saw me last. And they’re also happy, obviously, because I smell like the best food. Better than anything they’ve ever had.”