Get Ready for the 4th Annual Montauk Seafood Festival

Shuck yes! The Montauk Seafood Festival will return for its fourth year on September 10 and 11. 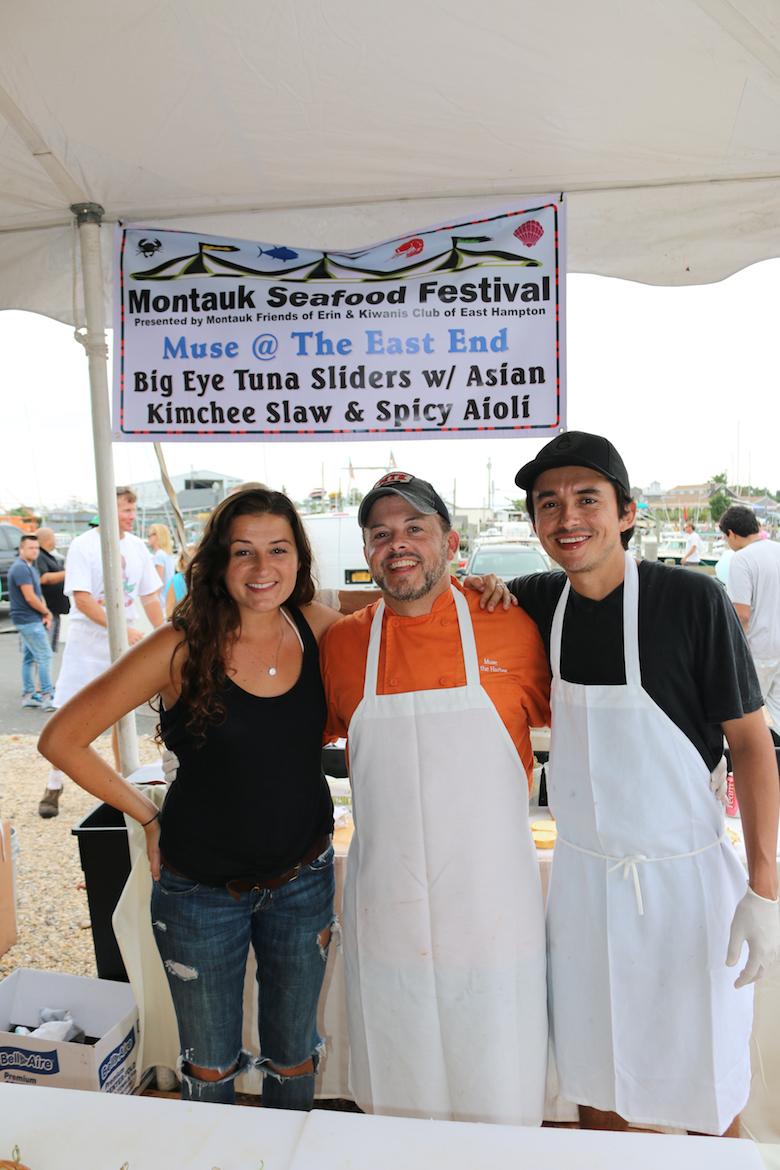 That invitation, of course, is the Montauk Seafood Festival.

On Saturday and Sunday, September 10 and 11, the festival will return to its two locations—the Montauk Marine Basin and Gosman’s lot; at 426 and 543 West Lake Drive, respectively—for its fourth year. From noon to 5 p.m. each day, guests will be able to enjoy lobster rolls, seafood crepes, sushi, ceviche, chowders, and more—all prepared by local restaurants (among them, more than a few Edible favorites). 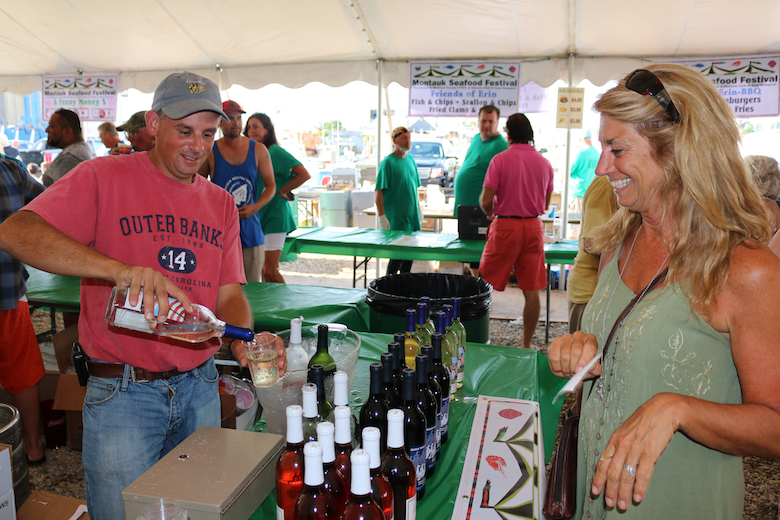 Montauk Brewing Company will be on hand to provide some local brews; Duckwalk and Pindar Vineyards, to pour some local wine. For the kids, there will be plenty of lemonade and cola.

The festival—presented by the Montauk Friends of Erin and the East Hampton Kiwanis Club—is designed with people of all ages (and means) in mind. First, there is the admission fee: $2 per person, with kids under the age of twelve allowed to enter free. Once inside, every dish is priced incrementally (and reasonably): $5, $10, $15.

There is also the inclusion of standard festival fare—for anyone who’s not a fan of seafood—like burgers, hotdogs, and fries; corn, cookies, and cotton candy. For entertainment, there’s goldfish and crab racing, live music, raffles, and even a drip painting station for Jackson-Pollock’s young, aspiring heirs.

“One of my favorite parts about this festival is the feedback we get,” says Laura Mastandrea, the festival’s director. “People say, ‘It’s so great; I was able to take my whole family here.’ That’s something I hadn’t heard in the Hamptons and Montauk for a long time.” 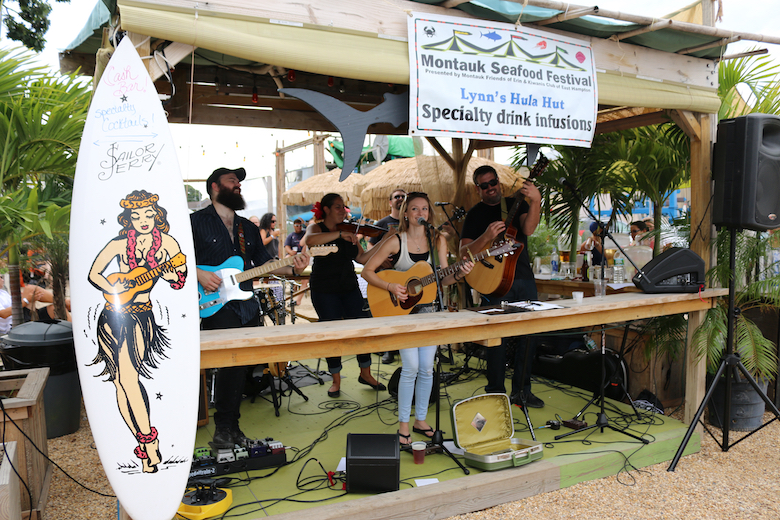 Mastandrea has been a part of the festival since the very beginning. She and her husband live in Sag Harbor, but they spend a lot of time in Montauk, where they own a house. The village is a community she deeply cares about.

“For me, it’s a real joy to be a part of the Seafood Festival, because it’s such a wonderful community event,” says Mastandrea. “All proceeds from the festival go right back into the community. So, it’s great food and entertainment, and then the townspeople get to enjoy the benefits all year round. The locals show up, too. It’s well-attended by locals and visitors alike. Over 10,000 people wind up coming. Everybody loves it.”

And so, too, do the restaurants. 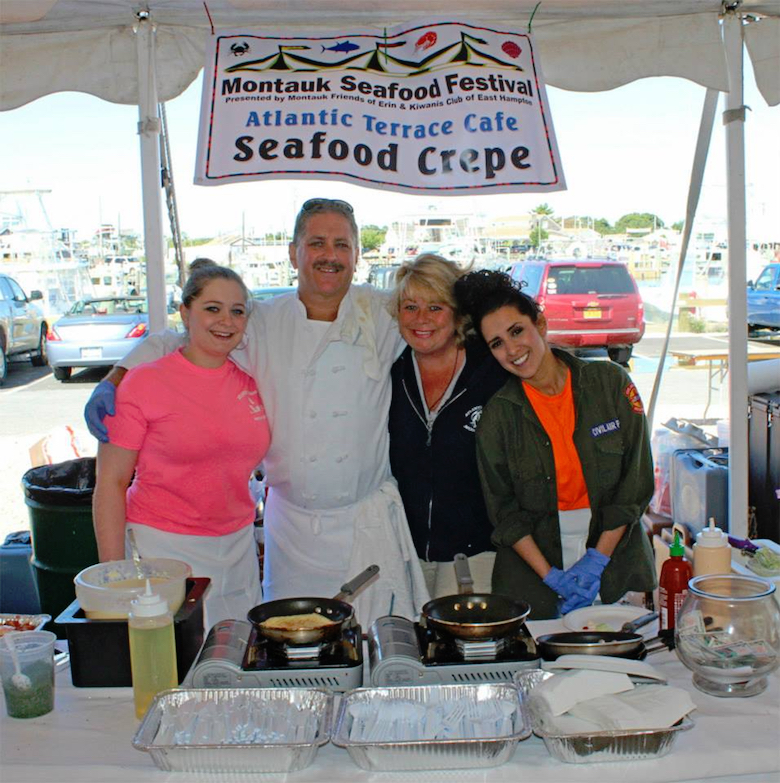 The Atlantic Terrace team is all smiles at the Montauk Seafood Festival.

Chef David Piacente, the executive chef at Gosman’s, is also looking forward to the event. “We’ve been participating in the festival for three years now,” says Piacente. “This year we’ll be serving our New England clam chowder; it’s won the Montauk Chowder Contest two years in a row. We’re so excited for people to try it. We really look forward to the Seafood Festival, because it’s right down the street from us. We just get out of the restaurant and walk down the street. There’s a band playing, people are out and having a great time. It’s a lot fun.”

And according to Mastandrea, working with local restaurants like Tauk and Gosman’s is a pleasure. 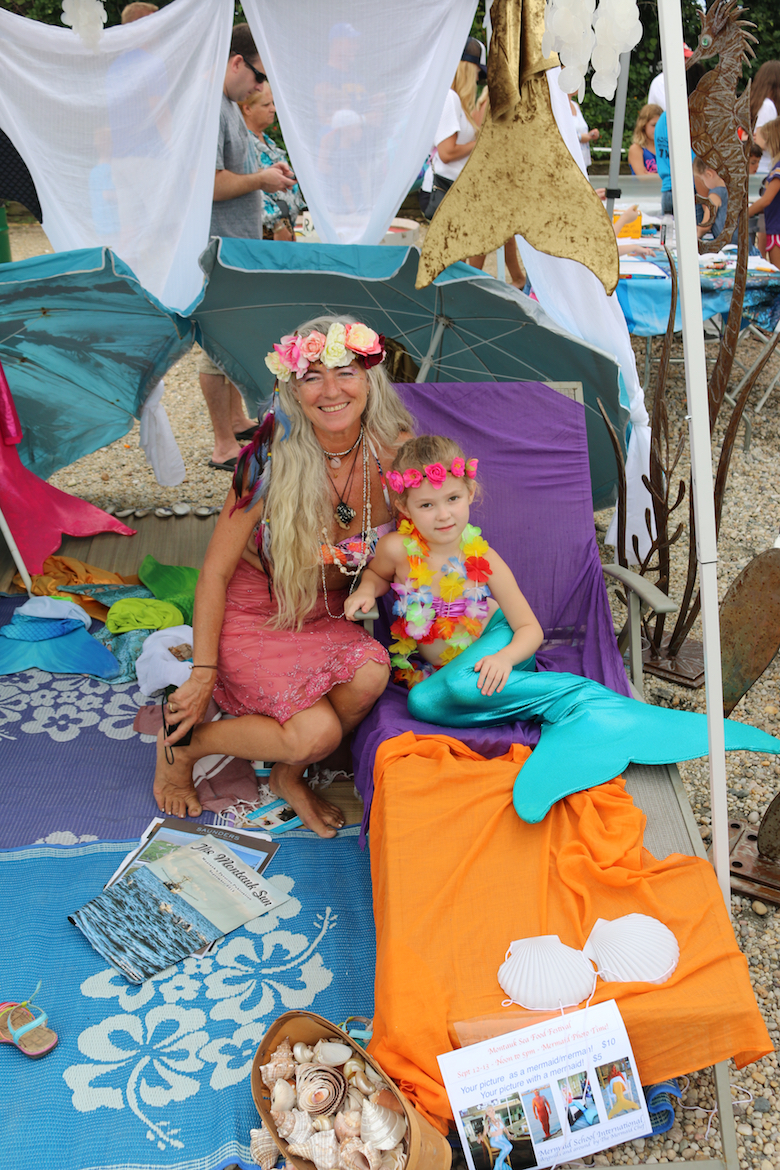 Even mermaids are welcome at the Montauk Seafood Festival.

“The restaurants really get a kick out of it,” she says. “Especially for the restaurants open all year, they’re coming out of the summer season and then they have this event that tells people, ‘Hey, we’re open year round. Come on in!’ And they do. They’re able to see the return. The festival’s just so great.”

It’s also for such a great cause. The Montauk Friends of Erin and the East Hampton Kiwanis Club provide and support important community programming—things like Toys for Tots, Meals on Wheels, youth services, scholarships, sports programs and the annual Santa Parade in East Hampton and the St. Patrick’s Day Parade in Montauk. All proceeds from the event go on to support them.

“We’ve really been blessed,”says Mastandrea. “The community is incredible and we always have fabulous weather—which is important, since the event is rain-or-shine. The seafood gods are definitely on our side.”

For more information about the Montauk Seafood Festival, please visit their website: www.montaukseafoodfestival.com. Edible is a proud media sponsor of the event (which means we’ve got a sneak peek at the festival’s confirmed list of vendors and what they’ll be serving; check it out below).