Bhavana Berries Will Have Blueberries All Season

Different varieties will keep these organic blueberries in season well into fall at Bhavana Berries. 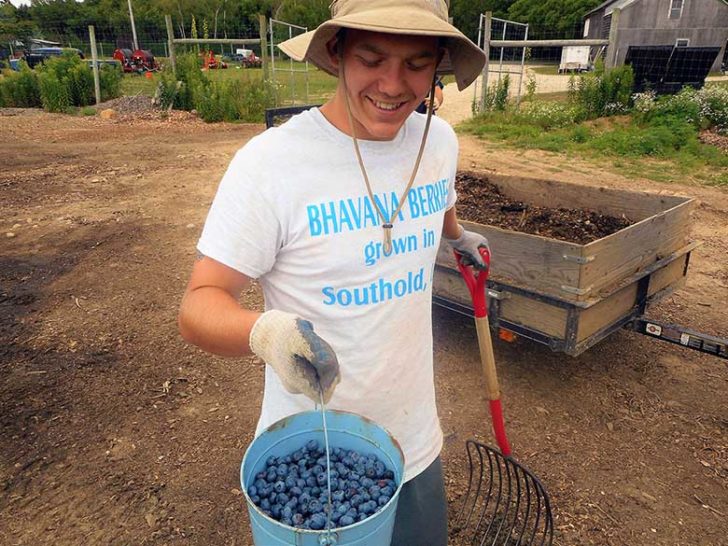 Worker Dan “Big DT” Taylor with a bucket of berries.

At Bhavana Berries, a new farm in Southold, my daughter and I are picking and “tasting” blueberries straight from the fields. They’re large, sweet and warm from the sun, and to add to the magic, the bushes sparkle and birdsong fills the air. She’s absolutely entranced. In fact, the sparkles are from fluttering, reflective tape, and the song is a recorded distress call; both are meant to ward off flocks of hungry birds. On the weekends, a trained peregrine falcon further discourages them, but even so, the occasional berry gets pecked.

The word “bhavana” is from the Sanskrit, meaning fertile field, but it also has the Buddhist sense of cultivating, or bringing into being. Mickey Harley, a hedge-fund guy, started Bhavana Berries with business partner Paul Lawless. He’s off in the distance, hand-pulling weeds in the hot sun and talking constantly on the phone. Some interesting dharma going on there, I think. The idea, he says, is to create a place where people can take part in various activities, as well as, of course, pick blueberries. Harley also teaches and practices yoga in his own studio on-site. He got into farming to balance the financial stuff, and chose organic blueberries because they’re super healthy, and organic farming is a way to protect the land for the future. “We want to make this a place where the community feels welcome, where people can experience and enjoy what we have here,” he says.

Natali got involved in North Fork agriculture since moving out here part-time a few years ago. He was most recently a fine art dealer and registrar in New York City, and is himself a painter, but comes from a Dutchess County farming family and generations of truffle-hunters and olive-pickers in Italy. He’s excited, he says, about the potential of Bhavana Berries. 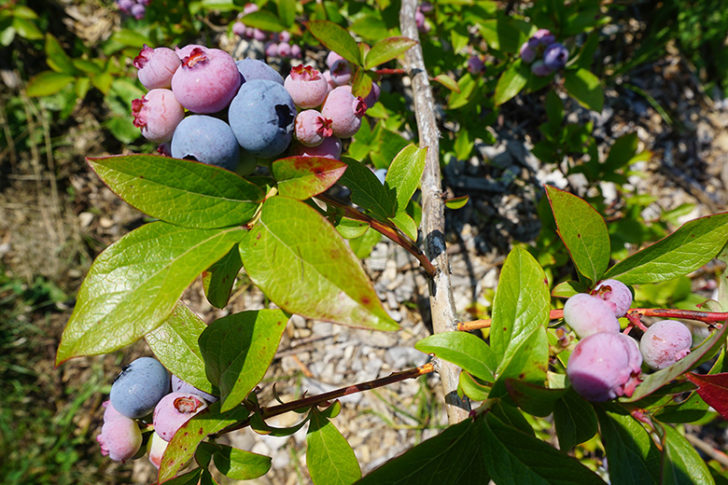 This 30-acre farm on Horton’s Lane in Southold was once a potato farm; the blueberry plantings started in 2013. Last year, the crop was about 4,000 pounds, and they’re hoping for about 20,000 this year. Different strains ripen in succession, to provide an ongoing supply into the fall, well past the time most commercial berries peak. The season starts with early-ripening varieties Duke and Sweetheart, then Draper, a large, plump berry, and Bonus, described as having notes of cinnamon and chocolate. At the end come Liberty and Aurora, the “grand finale” of the harvest.

In a few years, they’ll be among the larger growers of organic blueberries on the East Coast, Natali says. Also, they’re already expanding rapidly into other crops. This year includes interesting and unusual varieties of sunflowers, garlic, peas, beans, kale, shallots, carrots, melon, spinach and more. And, in important news, they have just achieved USDA organic certification through NOFA-NY for the blueberries and garlic.

However, I can attest that the best way to get the blueberries is to pick them yourself, and this is definitely fun for the kids, too, but get there early; the u-pick field is already a popular destination on the weekends.