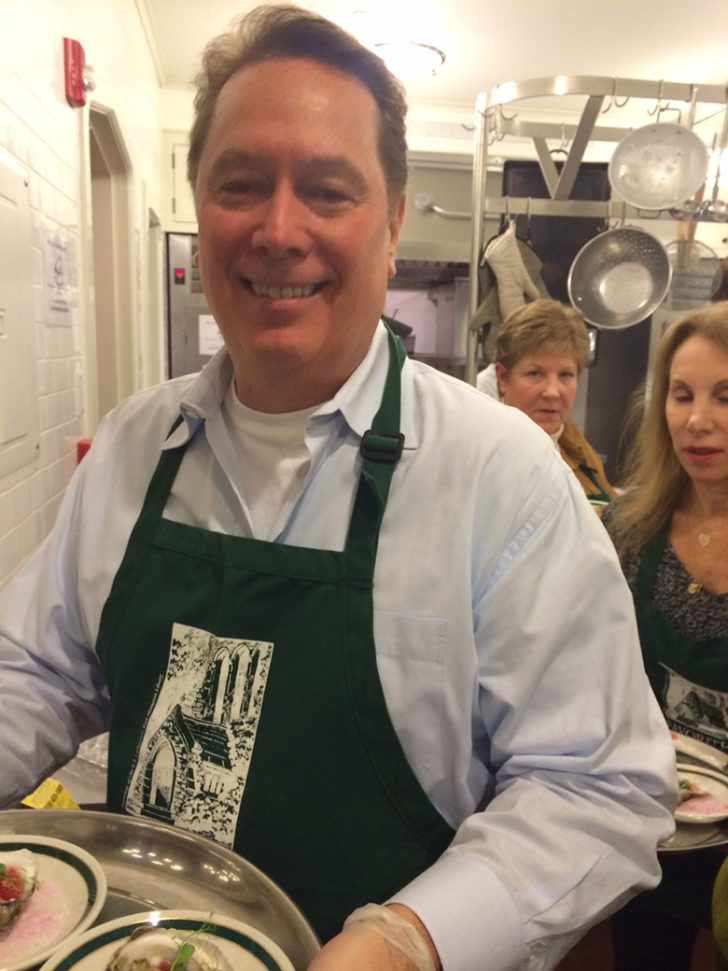 It wasn’t exactly a pulpit but George Gounelas, manager of the Old Stove Pub in Sagaponack, took the reins of the East End Chefs Program at St. Luke’s Church, to preach the gospel of Greek food.

In a building behind the stone church overlooking East Hampton Town Pond, Gounelas stood in front of a cloth-draped folding table. A double burner, cooking utensils and ingredients for pasticcio, a classic Greek dish, were his sacraments.

Popular East End restaurants donate food and services for the Chef Dinners on selected Wednesdays, every month. At $25 person, the dinners offer the community a chance to dine out on the cheap and also support the church’s scholarship program.

Over the course of nine dinners, more than $10,000 was raised to defray tuition costs for college-bound locals. “We gave out two scholarships, two weeks ago,” said Lillian Woudsma, who organizes program.

Last month, guests seated themselves at round banquet tables. As mini crab cakes and spanakopita were passed around, Gounelas told the diners that Gosman’s Dock in Montauk supplied the crabmeat and Dodoni feta cheese could be purchased from the Greek Orthodox Church gift shop in Southampton. The “special” feta lends a “mushier consistency” when mixed with fresh spinach, leeks and garlic for filling in between the phyllo crust.

“Pasticcio is like moussaka but instead of eggplant, you use straw-shaped ‘Greek’ noodles,” Gounelas said. In a pinch, the shorter, wider penne pasta could substitute for bucatini in the savory pie.

“If you really want old grandma’s macaroni, it is all lined up in neat rows. You think I’m kidding?” Gounelas said, “I’m in favor of more natural look. I don’t have the patience to line up macaroni.”

“I’m going to show you how to make a meat sauce in under an hour. Italians do it seven or eight hours. I’m not going to sit here until three in the morning,” he said.

Moving onto the béchamel, the chef melted an ungodly amount of butter in a pot and slowly whisked in flour, then slowly whisked in organic milk. Lowering the flame on the burner, a young volunteer joined the chef, to make sure the eggs were added correctly. “This is where you can lose it if you don’t have a helper,” he said.

Scramble the eggs with pepper. “I like black pepper spots in it,” he said.

“Ready James? Slowly pour,” Gounelas instructed his helper, all the while stirring the creamy mixture in the pot, “Otherwise you’ll have an omelet inside your béchamel.”

When a “nice smooth consistency,” was reached, everyone clapped. Here, the use of spices such as nutmeg, cumin, paprika or saffron, can be added. “That’s how you can be creative,” he said.

The pasta was added to the bottom of the tray. A layer meat sauce is spread over the pasta and finally the béchamel. “Pour right down middle and spread it out,” he said. “Bake at 375 degrees for 35 minutes until it’s all frothy. It’s done when a knife comes out clean.”

The pasticcio was served with a cabbage salad, “a very common Greek lettuce salad,” followed by Kalypso Greek Yogurt, topped with fresh strawberries and blueberries.

The date of the next Chefs Dinner—with Sam Mohan, the owner and chef of Saaz Restaurant, an Indian restaurant in Southampton—will be announced shortly. Stay tuned!