Alex Guarnaschelli Gears Up for a Very “East End” Summer

Food Network favorite, Alex Guarnaschelli, will host Dan’s Taste of Two Forks on Saturday, July 23, and then return to the Hamptons on August 5 for Carolines @ the Beach—a night of stand-up comedy—at Guild Hall.

Follow Alex Guarnaschelli on Twitter—I do—and you may find yourself forgetting she’s a judge on Food Network’s Chopped, the executive chef and owner of Butter, the author of the cookbook Old-School Comfort Food, and the host of the live comedy show Busting My Chops. Why? Because scattered like breadcrumbs between tweets about her world-class cooking and upcoming appearances on TV are hilarious musings about the recent pairing of Taylor Swift and Tom Hiddleston (affectionately referred to as Hiddleswift), and quips like these: “Overheard at a beachfront food truck ‘can I get an order of edamame gyoza dumplings?’ What happened to salty potato chips and a creamsicle?” and “Share a chocolate glazed doughnut and eat the last bite #QuickWaysToLoseAFriend.”

These are the tweets of the rarest sort of celebrity: the household name we would love to invite over. So it is especially good news, then, that Guarnaschelli is gearing up to spend much of her summer on the East End.

On Saturday, July 23, Guarnaschelli will host Dan’s Taste of Two Forks. The event—now in its sixth year—is a Hamptons summer staple, gathering together 40 of the East End’s best chefs (Edible favorites Colin Ambrose, Jeremy Blutstein and Marco Barrila among them) for a delicious celebration of our region’s culinary bounty. Guarnaschelli, having previously attended the event as a guest, is looking forward to her stint as host. 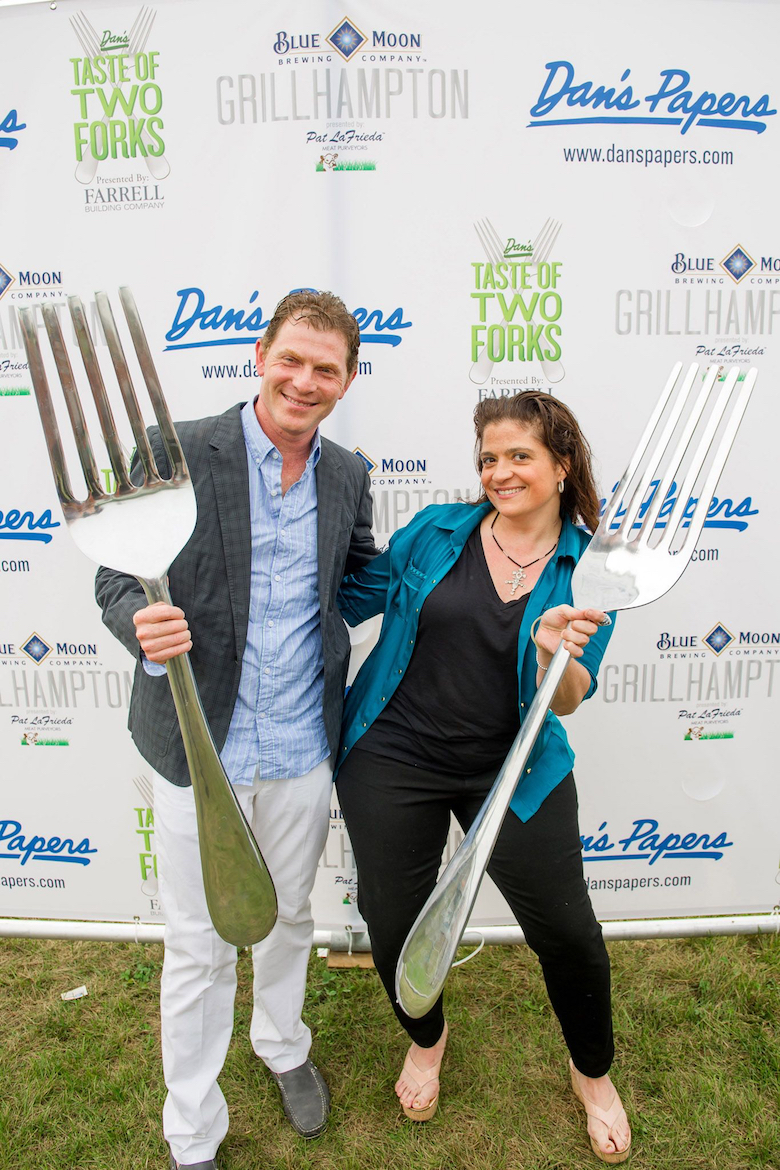 Alex Guarnaschelli and Bobby Flay at Dan’s Taste of Two Forks in 2013.

“Sometimes it’s good for me to take a step back and just see what everyone else is doing,” says Guarnaschelli in a phone interview. “I think the fact that I’ve cooked at so many of these events and that I love Long Island ingredients so much makes me the best fit. And I love seeing what all the other chefs are doing, too.”

Guarnaschelli is, characteristically, being modest. She not only loves Long Island ingredients; she knows them—and the people who grow, sell, and then cook with them—intimately.

“I’ve cooked a lot in the Hamptons, and I love so many of the markets—Pikes and Balsam, especially,” she says. “I just love what the East End is doing. I love the cooking the chefs are doing and I love the farmers. I love Almond. I love Conca D’Oro in Sag Harbor. I love to have a drink at Murf’s.”

There is a lot to love also about this year’s Taste of Two Forks. In addition to the spectacular array of local food, wine, and spirits for which the event is known, it will for the first time take place at Bridgehampton’s Fairview Farm—a beautiful, sprawling waterfront property. Still, Guarnaschelli is most excited about the food and her co-host, Katie Lee.

“I love Katie Lee,” says Guarnaschelli. “She’s awesome. She looks way better in a dress than I do, but we’re close spirit animals.”

On August 5, Guarnaschelli will reappear in the Hamptons with some other spirit animals—comedians Judy Gold, Yamaneika Saunders and Karen Bergreen—for Carolines @ The Beach at Guild Hall, a sure-to-be raucous night of standup comedy.

“I’ve just been gradually exploring the world of standup comedy,” says Guarnaschelli. “I did some at Caroline’s a few months back, and it just kind of morphed into this collaboration with female comedians. We thought, ‘Why not have an event at Guild Hall?’”

And just like that, the timbre of Guarnaschelli’s Twitter makes sense. Not only is she a celebrity chef poised to host one of the biggest food events of the summer, she’s a natural-born comedian—and, like all of us, a little skeptical about Hiddleswift.