You can enjoy a Catalan country picnic in your own yard. 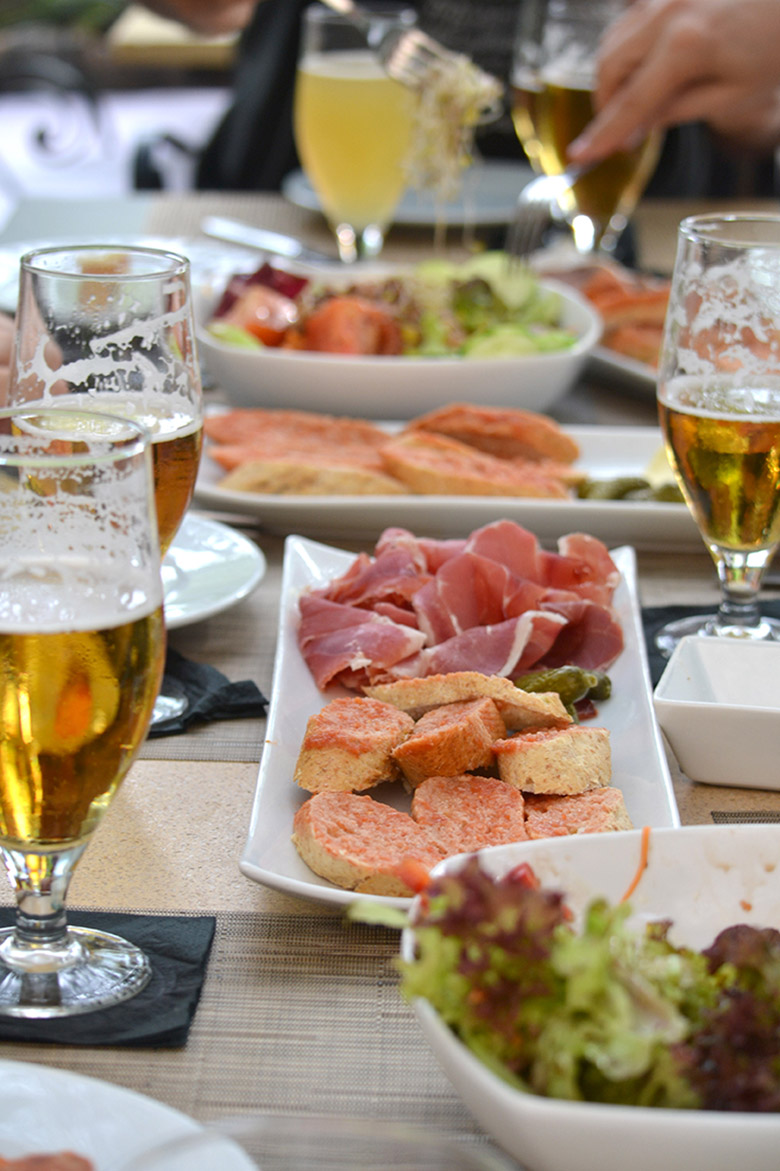 Last October I visited a friend at his home in Mallorca who had bought a Tonkinese kitten from me. I felt the Island connection immediately. After all, I’m island-bred. This all-terrain bit of land in the Mediterranean, off the coast of Spain, has become my dream destination. Though I don’t speak Catalan—the native tongue in Catalonia (the part of Spain with its own heritage)—or even Spanish, the there’s a feeling of friendliness in the air, along with the scent of the sea. I would move there in a New York minute! At least for five or six months, when the weather is glorious and people live on their patios, with their glass sliders wide open to catch the breeze. Living has the ease of our southern states. Even the crowds of tourists in high season don’t seem to be in a hurry. Lunch is mid-afternoon at a café in a placa or near a pool or marina; dinner is under the stars, and wine from local vineyards is decanted glass after glass.

Looking up from the Old City or the harbor, etched against the sky, are the Serra de Tramuntana mountains, the peaks of which are reached by hairpin turns that rival California’s Route 1. Below the heights are irregular plains of olive and almond trees, spotted with splotches of ochre and grungy white that turn out to be sheep. They hover along the roadsides, near-side legs appearing longer than far-side, an illusion, as they balance on rocky spurs and stony slopes. In this respect, the route to the venerable villages stuck to the edges of the island reminds me of our truncated glacial-rock north shore. But here, suddenly, you are driving between brushy trees and rugged ditches into the abrupt cobblestoned heart of a picturesque village snugged into a rocky cove, not with the Pacific or the Sound down below, but with the Mediterranean sea lapping right at your toes. There are wide niches of sand, contained by rock walls, where bathers soak up the sun well into October, marinas crowded with large and small boats, cafes running the gamut of the main street. Each café has its own cluster of tables and chairs under colorful umbrellas, across the brick sidewalk and pavement along the sea walled quay. Singles, couples and families are everywhere, in and out of galleries and garment shops, checking out displayed menus, enjoying the sun and breeze, settled at rustic tables sharing a chicken or fish paella for two, four or 10, in the traditional flat round pan. A town like Valdemossa is a summer day’s visual treat. It’s also an inspiration to start thinking about where to eat!

Our destination was planned. We drove through Valdemossa’s crooked brick and cobblestone streets, climbing far above the city of Palma, up a narrow curving byway, through the barely-there village of Port de Soller to a flower bedecked hotel called Hotel Es Port, spread on a bit of flat terrain above a series of terraces, where our host had prearranged a typical Catalan sultry afternoon lunch. A drying pomegranate hung from a nearly barren tree, an intricate white fungus clung to the bark of a random evergreen, little brown birds perched on the back of the deep wooden chairs in which guests made themselves comfortable at long, worn community tables. Nearby, four German women on vacation sipped iced tea and played Canasta. Vicence’s perky white dog curled on his lap, and Miquel’s King Charles spaniel sat politely at his feet. It could have been a public park anywhere, with picnic benches; it could be your backyard or deck, with your dog lazing in the sun, a view of your own garden, company on the way.

Since we were at a rustic hotel in the hills, a waitress brought cold drinks, beer, wine and tea. One of the men had stopped in the village for fresh specialty rolls, made daily only in small batches in local bakeries. These chewy white artisan rolls, called Valldemossa coca de patata or potato cakes, may be plain or topped with confectioner’s sugar; or, “they may be ‘perfumed’ with powdered cinnamon … topped with candied apricot or red pepper.” Pieces were torn off and shared while we waited for the main fare.

You undoubtedly have a refrigerator full of preferred beverages to set on the table on a tray. Everyone helps themselves. You’ve set out small bowls of quartered lemons and limes, green, black, oiled and spiced olives. The crusty brown rolls you made—or ordered from your specialty bakery—are piled warm in rustic baskets, covered with napkins, waiting to be torn into bite-size pieces and dipped into small bowls of olive oil, sea salt and perhaps, minced or roasted garlic.

A few Catalan dishes are so typical they’re inevitable. On colorful rectangular platters at each end of the table for everyone to help themselves (or each other) glow thinly sliced fatty pink and white Serrano and Iberico ham, specially raised from pampered boars, aged to sweet perfection; two-bite rectangles of coarse firm artisan bread, rectangular loaves sliced fairly thin and lightly toasted, sweet ripe vine tomatoes are smushed over the surface of the toasts as a foundation for the ham and cheese—a selection of Spanish cheeses, probably Manchego, Cabrales, Idiazabal, Iberico—that then top the ham; the surface to be drizzled with olive oil pressed from the bounty of the trees silhouetted in the distance. There may be shallow dishes of anchovies or roasted red peppers interspersed with that other Catalan favorite, generous community bowls of oil and vinegar-dressed garden salad greens and chickpeas, topped with rounds of canned tuna ready to be flaked and shared. Bottles of oils and vinegars, dishes of flaked sea salt, all processed in the Balearic Islands, are passed around the community table hand to hand, family style as you’d do at your own picnic, to splash on individual plates of simple, wonderful food.

No one hurries. Talk and banter whip around the table with gestures, laughter, and an occasional yawn. (The previous two-night house party was taking its toll.) Cell phones are silent. The dogs have their share of tidbits. I listened carefully, catching a word of Catalan or Spanish here and there, but mostly enjoyed the carefree atmosphere, the social interaction, and taking pictures.. Despite the language barrier, the picnic is my milieu. I feel at home.

Before I knew it, it was time to drive down the mountain to catch my flight to Switzerland after an afternoon and a weekend I”ll never forget. I know I can find the Spanish hams and cheeses at Trader Joe’s or Fairway. If I get brave, I’ll bake the specialty rolls. If not, I’m sure I can find something similar at my favorite bakery. King Kullen always has lots of fresh rolls. I’ve brought home the salts, oils, olives and inspiration from the source. 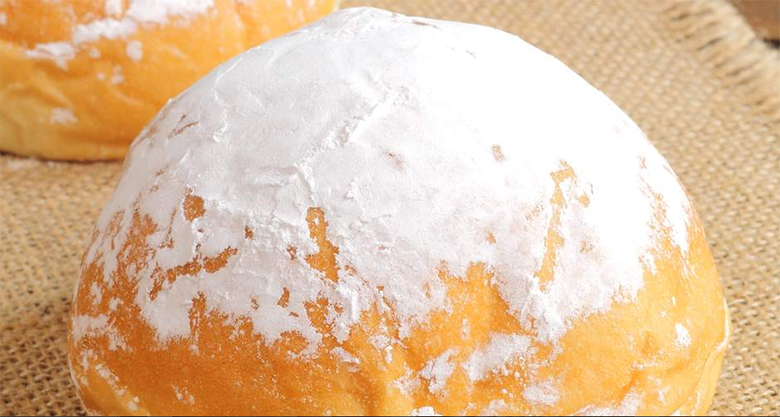 Peel and rinse potatoes and boil in salted water. Once cooked, mash to a paste.

Put flour in large bowl. Make a well in the middle. Pour in yeast dissolved in a little warm water, potatoes, sugar and lard. Knead to obtain an even dough, cover with a towel and let rise.

Knead again and form 12 balls of similar size. Grease a pan with olive oil and arrange the balls on it, well apart, to allow for rising. Bake at 350 for around 30 minutes. Once done, sprinkle with confectioners (or other “perfumes.”)