A big French name takes over a corner in Bridgehampton. 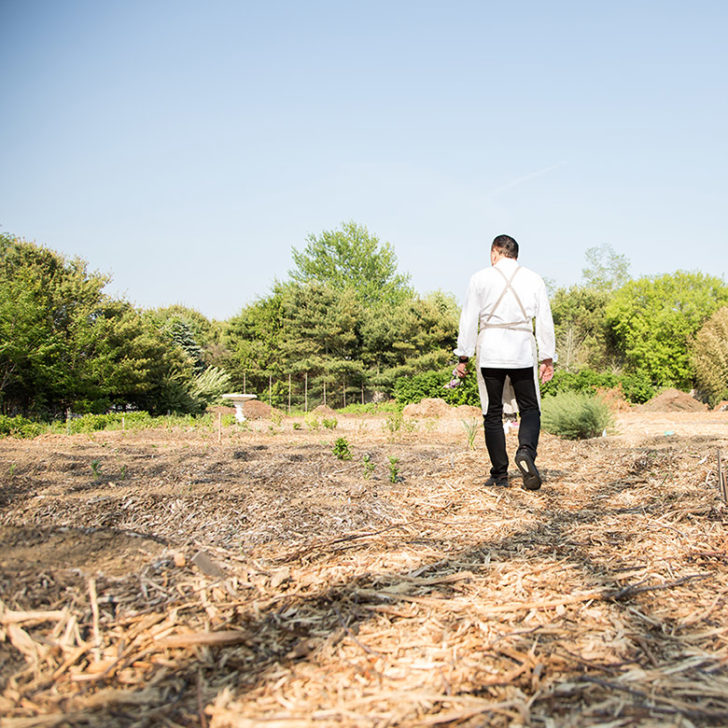 Jean-George in the young garden at Topping Rose restaurant and hotel.

From the outside, Topping Rose House seems unfazed. The utter-white 1842 Greek Revival mansion, reminiscent of a sleepy Southern belle, sits patiently at the corner of Route 27 and the Bridgehampton–Sag Harbor Turnpike. But step in and a blast of energy engulfs the curious traveler.

“We’re at the beach! No socks, no tablecloths!” announces Jean-Georges Vongerichten, the celebrity chef who has taken over the kitchen left wanting since Tom Colicchio’s departure last year.

Vongerichten, über-dapper in a starched beige linen apron, runs no fewer than 35 restaurants around the world ranging from his New York City flagship on Columbus Circle—three Michelin stars and a consistent four-star rating by the New York Times—to Simply Chicken booths at Madison Square Garden and elegant eateries in Las Vegas, Mexico and Dubai among others.

In Bridgehampton, the chef has done more than rip off the white tablecloths. The two dining rooms now feel more inviting, with a bright-green banquette running along the side walls. Seagrass and bamboo light fixtures lend a laid-back touch, and the stately oak tables have been sanded down for a rustic-chic look and feel.

Even the organic garden is getting a new life with farmer Ian Steiber at the tiller. Raised beds are going in, the compost pile is growing every day and local ramial wood chips help fertilize the soil. 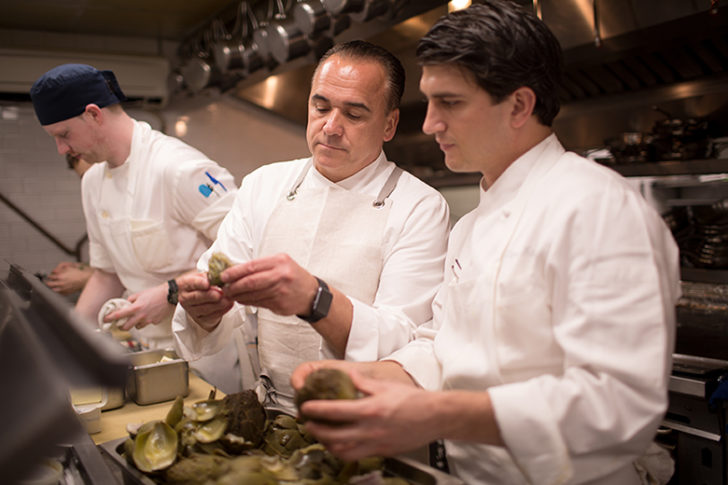 In the kitchen with Jean-Georges at Topping Rose restaurant.

“Taste this sweet pea guacamole,” he says as he walks through the kitchen. “See these beets, I love this, you can smell the earth.” It is no coincidence that many great chefs grew up on farms. “The older you get, the closer you feel to your roots,” says Vongerichten, who hails from the Alsatian countryside.

Above each kitchen station, a neat white folder (no jus stains yet) holds recipe sheets for each dish. “Everything is weighted to the gram, just as in pastry,” he adds. Each time a new restaurant opens, a “JG” crew descends, to ensure the incredible consistency reigns in every plate.

JG fans will be relieved to find familiar hits on the simple menu—away with the leather booklet—such as the addictive crispy salmon sushi with chipotle mayonnaise, the kale salad, and the Parmesan-crusted chicken, but just as in his “other” new restaurant on Fire Island, he’ll bring more local seafood into the plates as the summer nears. “Whenever possible, we work with small boats out of Montauk.” The meat is grassfed and a wood-burning oven is on its way.

A pea soup somehow concentrated more pea essence than I had ever experienced.

It took serious willpower to refrain from asking for a straw to finish the ginger marinade that bolsters a silky tuna tartare coated with avocado. A pea soup somehow concentrated more pea essence than I had ever experienced. A modestly entitled citrus-chili “dip” lent a spicy, fluffy cloud, halfway between mousse and foam, to delicately fried calamari (thoughts of that straw again), but later on, the simple spoon gathered every inch of the chocolate nectar oozing from Vongerichten’s signature molten chocolate cake.

The chef has taken over the relationships with local farmers, purveyors and vintners started by his predecessor, but he’s also avid for recommendations from his customers.

“I heard about the Amagansett salt and now it’s on every table,” he says, beaming. So what’s next, JG? “I don’t know, the moon?”

Sylvie Bigar was able to conduct this interview in English and French.