The Poetry of Cooking

North Fork’s favorite chef, John Ross, will be out signing his new book of poetry and recipes this summer 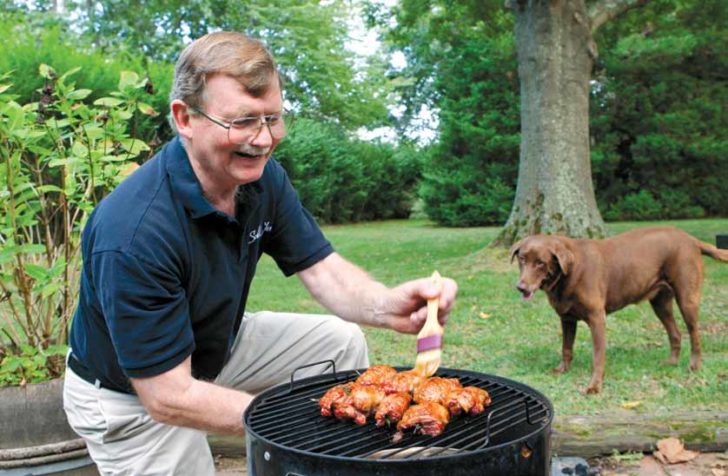 Chef, columnist and restauranteur John Ross released his third cookbook, The Poetry of Cooking, in Fall 2015. His book includes dishes inspired by the North Fork’s unique seasonal bounty as well as photographs by Ross and other local photographers. To celebrate the release of his latest book, Ross has organized a calendar events for the summer including cooking demonstrations, tastings and book signings.

The book events are sponsored by local libraries, retailers and Foodie Tours throughout the summer and into September. He appeared on Saturday, June 18 in Riverhead at the Pottery Barn in the Tanger. In August, Ross will appear at the Westhampton Beach Library as a part of their monthly cookbook club.

Ross’ love of poetry, also incorporated in his food column for the Suffolk Times, comes through with each poem curated by Ross himself. It’s a style that “draws people in,” he says “for people who don’t want just a recipe.” They are among his favorite food related poems, some funny and some serious. The poems add another dimension to the cook book. Ross hopes that the combination of poetry and cooking encourages people to enjoy the therapy of cooking and dining with friends and family. “When I get a group of ingredients on a cutting board, [the finished product] is like a poem,” says Ross. Some of his favorite poems in the book include February’s “Linguini” by Diane Lockward and April’s “Perhaps the World Ends Here” by Joy Harjo.

To cook from scratch you have to make a commitment. You can’t start thinking of your meal 30 minutes before dinner.

Ross was the chef and owner of Ross’ North Fork Restaurant in Southold for almost 30 years, driving the farm-to-table movement on Long Island. As a Southold resident, he enjoys and understands the local harvest of the land year round. Previously, he has written books about food and wine on the North Fork, The Food and Wine of the North Fork and The Story of North Fork Wine, highlighting Long Island’s food developments going as far back as the 1870s. Both books contain photographs and anecdotes that illustrate the growth of Long Island’s food industry and the people who continue to help it grow.

The following events require a sign-up through the venue:

September 11 at 3 pm –The Annual Foodie Tour in Southold