The Chew Comes to Hayground School 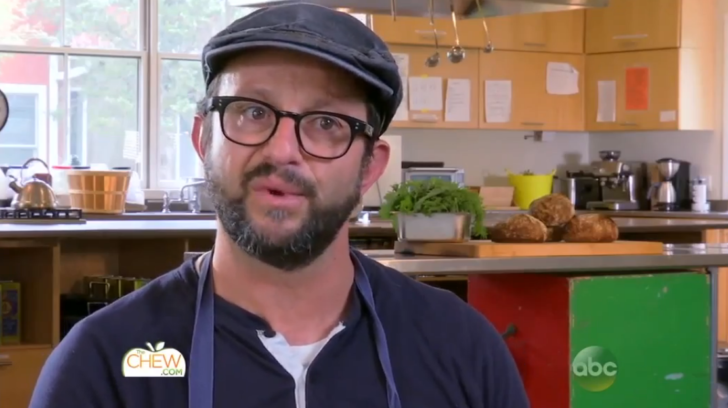 How does a group of children respond when a television crew comes to film a spot for a network show about their school? If they are students at the Hayground School in Bridgehampton, they happily show off their culinary and farming skills, and then become part of the film crew.

On May 23 and 24, The Chew, the popular ABC daytime television show devoted to food, filmed Hayground students and teachers, spotlighting the school’s lauded Culinary Arts/Garden Science program. The segment aired on June 7 at 1 p.m. on New York channel 7 and on ABC affiliates across the country. Students were shown in the school’s edible gardens and in Jeff’s Kitchen, the state-of-the-art on campus kitchen where kids daily cook their own lunch. The curriculum is headed by Hayground co-founders Arjun Achuthan and Jon Snow, with additional instruction by culinary arts teacher Scott O’Neill and studio/garden teacher Wanetu Tarrant.

Hayground came to The Chew’s attention when executive producer Marc Schneider and his wife Shari attended the Hayground Chef’s Dinner last summer. The annual event, at which star chefs like Tom Colicchio, Eric Ripert and Claudia Fleming cook for guests, raises much-needed funds for students, 80 percent of whom are on some form of financial aid. Hayground students range from 3-13 years of age. The school’s mission is to provide an open, community school where conventional teaching methods are replaced by alternative ways of teaching and learning, such as learning about science in the garden, and math in the kitchen. The Chew has previously highlighted East End edible gardens and East Hampton’s Nick & Toni’s restaurant.

While The Chew crew filmed, Hayground students baked bread and made mozzarella cheese and pesto from scratch to be served with school-grown kale and garden greens salad, culminating in a lunch for the whole school, teachers and film crew. As a special bonus during The Chew’s visit to Hayground, students Phoenix Bliss and Noah Topliff, members of teacher Liz Bertsch’s young Filmmakers group, were able to apprentice with the crew, assisting with sound and filming.

“It was very fun,” said Phoenix, age 9. “I got to help the sound guys, and do a little bit of filming on movie cameras, and I was interviewed with Noah about the kitchen.” Phoenix added, “It was great that the school got recognized on TV. It’s very good for other kids to see what we do, and to teach them some things that they could do, too,” such as employing an edible schoolyard.

Achuthan, who appeared in the segment on The Chew, concurred. “Hayground has been lucky in that it has embraced the school garden and culinary arts program whole-heartedly and made it an integral part of our curriculum and not an extracurricular activity. In that way we have been an example for other local schools on what an ideal farm-to-table curriculum could look like.”

Having The Chew come to school was an exciting experience for the students, but anyone who watched the spot could see that their story was important within the context of the national discussion of standardized teaching methods as well as the physical health of children. As Achuthan put so well, “We are unique in how we approach our curriculum and pedagogy. We want other schools to see what we do, not just in the kitchen and garden but in each classroom on a daily basis. We want to export that idea that school should be about doing, and not about covering, a certain content.”

If the spot on The Chew is any indication, Hayground, which celebrates its 20 year in 2016, truly succeeds as a place where the garden and the kitchen are the classrooms that prepare students for life.