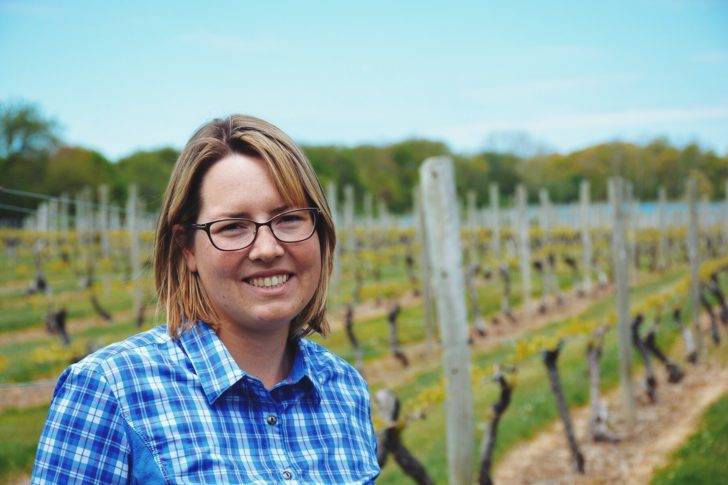 Erin Troxell, a viticulturist and self-described “scientific farmer” is the new vineyard manager at Bedell Cellars. Troxell grew up on her family’s seventh-generation farm in Pennsylvania and received her bachelor’s degree at Cornell University before earning her master’s in viticulture and enology from a joint program split between universities in France and Germany. She’s worked on vineyards in California, New Zealand and Europe. At Bedell, she’ll oversee sustainably grown grapes on three vineyard sites spanning 75 acres across the North Fork. I asked Troxell a few questions about Long Island terroir and her particular style of viticulture. (Bedell vineyard veteran, Dave Thompson, is retiring.)

Describe your approach to viticulture and vineyard management.
I like to describe my approach as “scientific farming.” That is, carefully and sustainably, balancing science and nature. This strategy combines technical expertise acquired through my formal education in viticulture with the practical aspects of farming gained while growing up on my family’s farm in Pennsylvania.

What’s unique about North Fork terroir?
The maritime climate and glacially deposited soils put the North Fork in a unique situation to produce quality wines from European grapes. Proximity to the ocean plays an important role in regulating temperatures and provides a distinct advantage to other growing regions of the Northeast. Ocean breezes protect the vines from temperature extremes in summer and winter, while heat generated by the water as the air cools in autumn extends the growing season for optimal ripeness. The climate is well complemented by sandy loam soils that provide adequate drainage to prevent excessive vegetative growth following summer rains and instead promote fruit maturation. Cultural practices, considered by some as a third component of terroir, play a critical role in making Long Island unique for winemaking. The region benefits from the people working the farms and the organized commitment to common goals of quality and sustainability.

What brought you Bedell or to Long Island in General?
After several years working and traveling among wine regions in Europe, New Zealand and California, I became eager to return to the Northeast where I grew up and developed my passion for grape growing. I was introduced to the Long Island industry as a student at Cornell, and since then it has been a region where I aspired to work. From my first visit, I recognized the region’s overarching commitment to quality and technical advancement, placing it at the forefront of the Northeast industry. On that same first trip as a Cornell student, I visited Bedell Cellars, so naturally when the vineyard manager position opened, I was keenly interested.

How does what you do in the vineyard affect the wine that’s bottled?
The use of a hands-on approach and sustainable practices in the vineyard allows Bedell to achieve high quality fruit that is then transferred to the wines. A set of “best practices” (e.g. canopy, nutrition and pest management) are tailored to achieve harmony between ripeness and acidity in the fruit while also protecting the natural ecosystem. Such meticulous care for the vines and stewardship of the land ultimately delivers wines that reflect the unique maritime terroir.

Do you have new plans for the vineyard?
While I get acquainted with the North Fork and Bedell’s vineyards, I am focusing on the rare opportunity to learn from my predecessor, Dave Thompson, who has generously been passing on his wealth of knowledge gained from over 30 years at Bedell. As the vineyards age, I would like to eventually collaborate with the winemaker, Richard Olsen-Harbich, and identify some vineyard sections for replanting in the future.

What’s your favorite pairing with local food?
While I am still a novice to the local food, I always enjoy eating what’s in season. I love asparagus, since it is one of the first vegetables available in the spring. Thanks to the team at Bedell, this week I enjoyed a risotto with homegrown asparagus and freshly caught fluke, which paired delightfully with sauvignon blanc.