One farmer sees rabbit meat as a delicious solution. 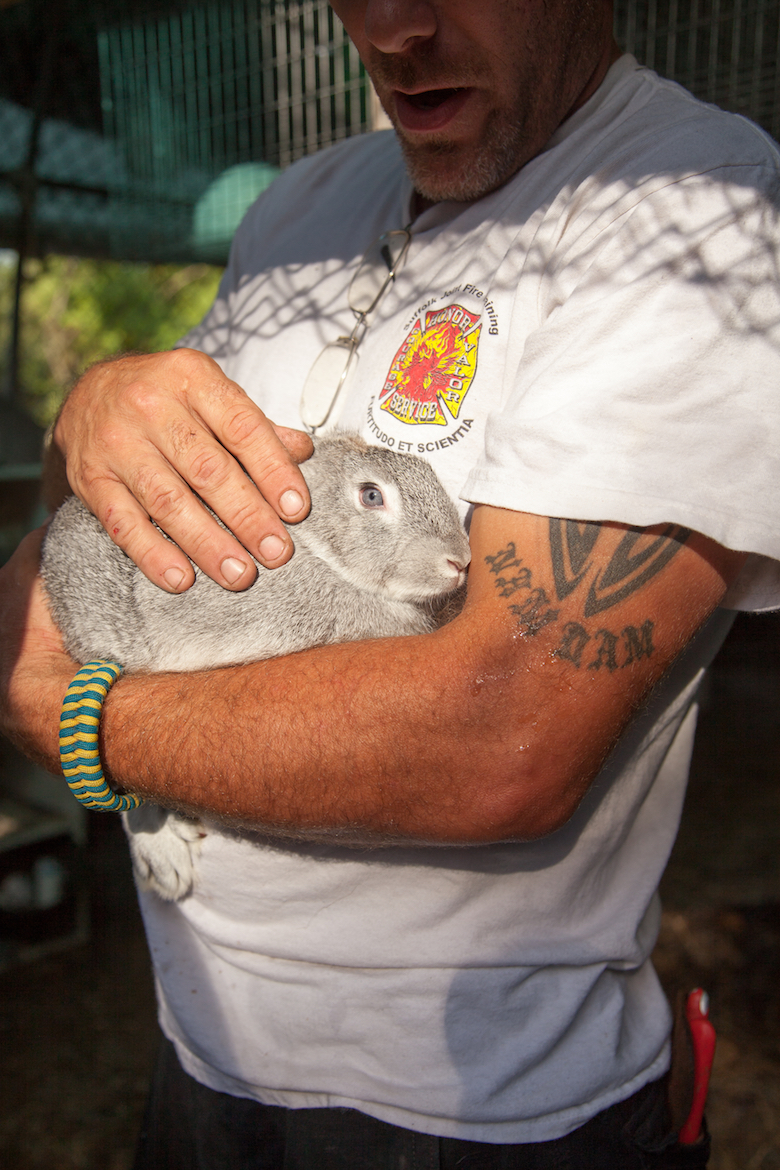 Rabbit breeder and chef Matt Feyh hoped for an easier winter this past year. With no plowed roads to reach his New Zealand whites the previous year, his first winter on his one-acre Amagansett farm was tough.

“I hiked in through waist-deep snow every day to keep their water from freezing,” he says. “It was tough on me, but I didn’t lose one rabbit.” Indeed, some early litters were born during blizzards, but that didn’t stop him from caring for his charges. He brought water and food in by sled.

His herd of 80 rabbits is fed 800 pounds of natural pellet food, some hay and the occasional carrot. “Their delicate stomachs would not be able to handle much beyond that,” he says. “Even lettuce could kill them; the diarrhea can get so bad.”

“I raised rabbits as a kid and got my rabbit raising merit badge as a Boy Scout,” he says one morning inside his rabbit house, a fortified hoop house built with scrap materials with no electricity. Each rabbit has its own 36- by 30-inch wire cage, five feet off the ground. The animals stay clean while excrement falls below. 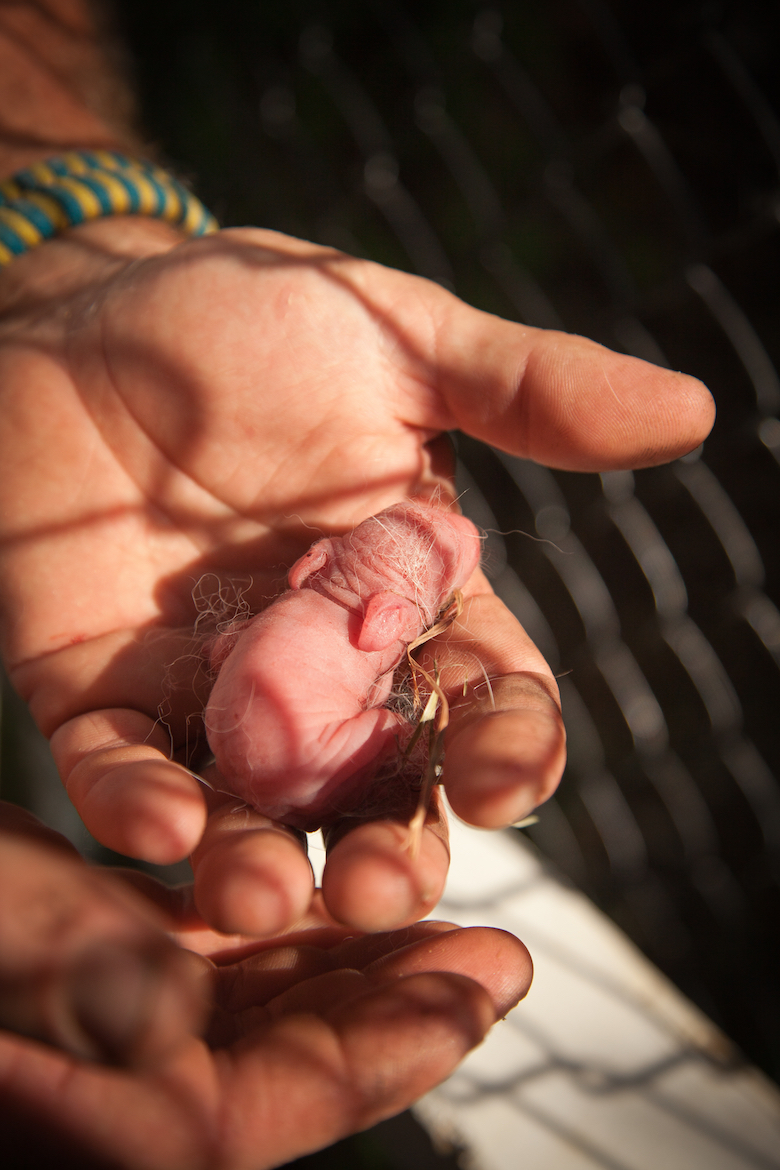 “You could grow crops here,” Feyh says. “Rabbit manure is the only animal poop that can go directly onto plants without burning it.” Cucumber, melon and bean vines will provide shade along the fences. In the colder months, a tarp is rolled down. Rabbits do well in the cold, not so much in the heat. When it does get hot, Feyh puts blocks of ice in each cage, because heat can render bucks temporarily sterile. “I’m thinking about solar-powered fans to cool them,” he says.

New Zealand whites have been bred for hundreds of years for their fur and meat. “They would not be able to mate with our wild American cottontail,” says Feyh.

Every bit of the animal is useful. The head, feet and organs can be ground up and sold as raw pet food. At $5 per 20-pound bag, the manure is worth its weight in gold to farmers and gardeners, especially rosarians, who use it as fertilizer. “You put poop in the bag and it comes out dirt in six months,” says Feyh.

Feyh believes raising rabbits as food is as good as it gets. “I’m in it philosophically, if you want to examine local protein sources.”

Rabbits’ feed-to-weight-gain ratio is one of the more efficient; they convert feed to weight at a ratio of four-to-one, meaning four pounds of feed adds a pound to the animal. (Cows average six-to-one.)In addition, rabbits have a higher percentage of protein-per-ounce than any other animal. “Six ounces of rabbit provides the same amount of protein as an eight-ounce portion of chicken, lamb, beef or pork,” says Feyh, “something the U. S. Navy realized a while ago when feeding sailors on ships and submarines.” 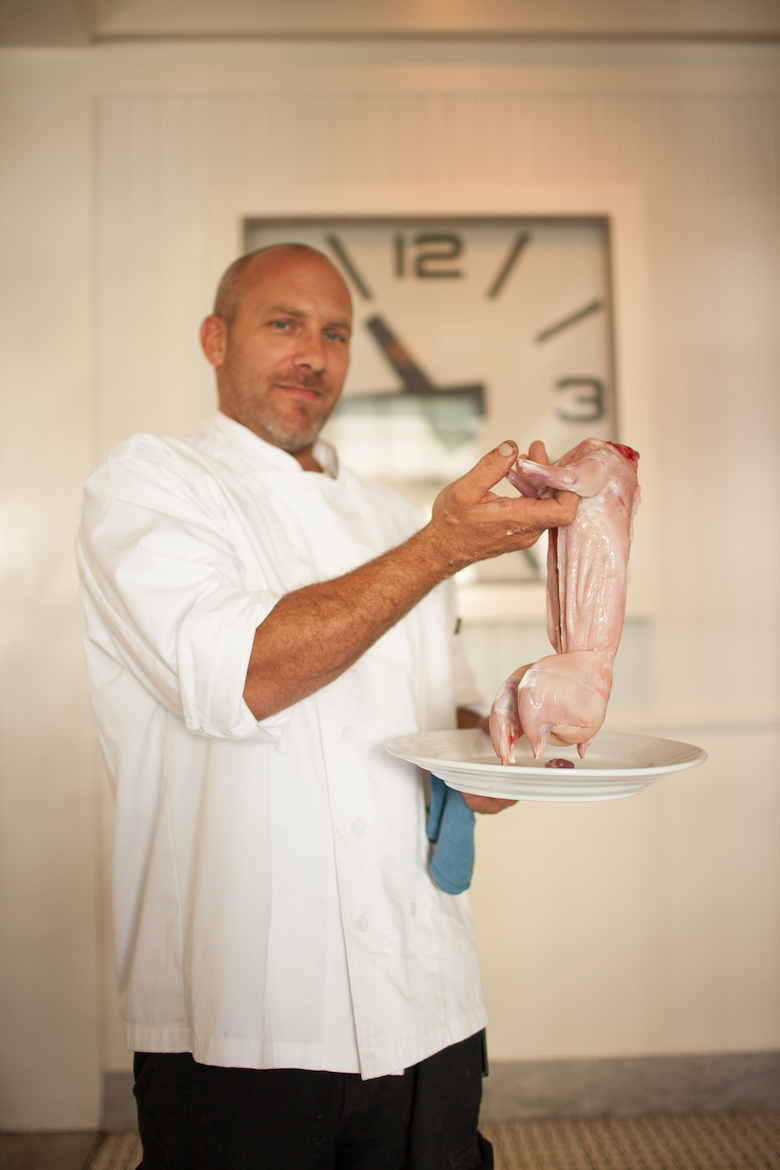 Rabbit meat is low in saturated fat and has no cholesterol. Feyh’s rabbits are never given antibiotics, and unlike other animals, they take up very little space and add nothing negative to the environment.

Still, there are hurdles. Many chefs’ private clients have no problem eating veal but won’t touch rabbit meat. “My son wants me to sell them as pets,” says Feyh. “I tell him, ‘I can but it’s up to the buyer what they do with it.’”

Getting over the “cuteness” factor is only half the battle. It is a misconception that rabbits are easy to breed. “It’s an insult to rabbit breeders,” says Feyh. “They don’t conceive that well.”

When a female and male are put together, they’ll mate in 10 seconds, or less. “In an instant, if they are ready,” says Feyh. “The males jump on top, grunt and fall over.”

To demonstrate, he takes a male and a female and puts them on a table. “I was going to set up a love shack, but it’s not necessary,” he says. Even though there are only three days per month a doe is unable to conceive, and mating happens quickly, mounting doesn’t always equal new bunnies. 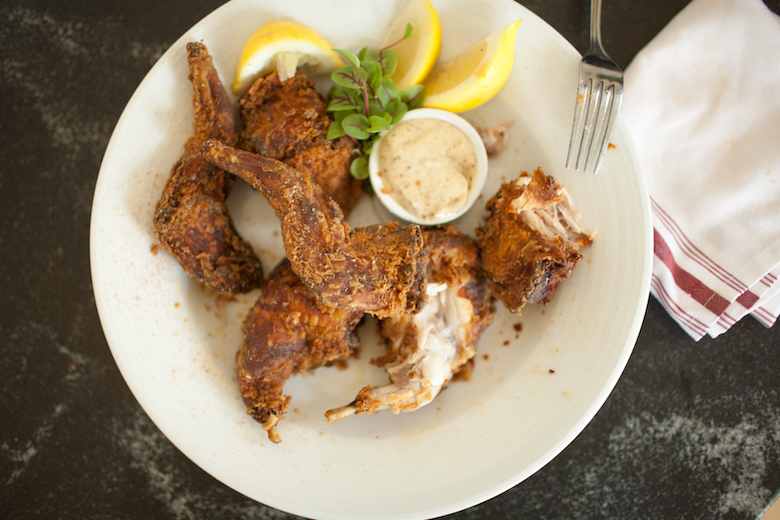 “Watch how quickly this will happen,” Feyh says. “He’s trying, but she’s playing hard to get. I don’t think he got it where it needs to go but he satisfied himself.” It takes six to eight hours for the eggs to travel down the fallopian tubes to ovaries, once stimulated. “So I return the doe to the buck six to eight hours later.”

The gestation period is 28 days, and it’s no picnic predicting if a doe is pregnant. It takes a lot of practice to palpate or feel the soft blueberry-size embryos inside a doe. “So far I have 90 percent conception rate,” he adds. “One doe missed with the buck that shoots blanks.”

The blank-shooting buck is a beautiful animal with a prized blocky head and face. Thankfully, another buck, nicknamed Jack the Hammer, more than makes up for the pretty boy by consistently giving huge litters.

“After seven to 12 days, you should be able to feel the belly,” Feyh says. “After 10 days, I put the doe back with the buck, and if she resists him, there’s a good chance she’s pregnant.” 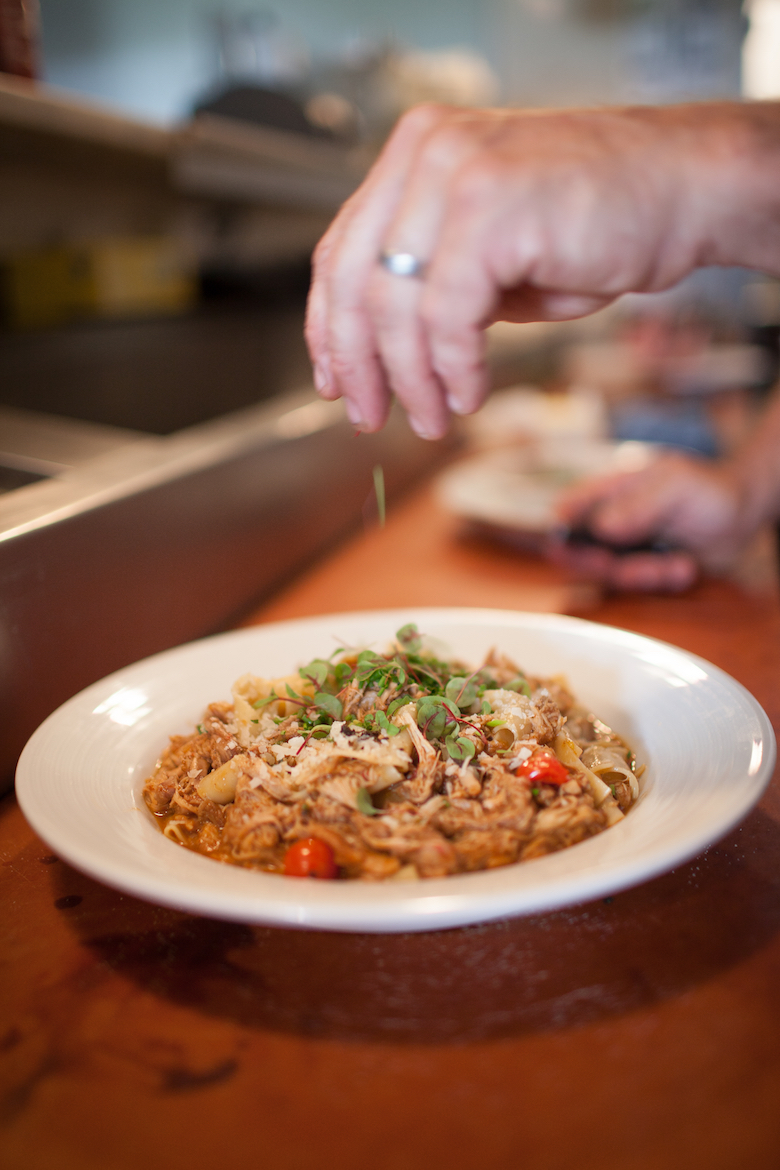 Feyh sets a nest box, a smaller cage, within the cage. The mother softens it with fur pulled from her dewlap, a waddle under her chin. When a doe stops eating, it’s a sign she’s about to give birth.

Kits have a high mortality rate. A doe may birth 16 kits and end up with nine. “Rabbits only have eight nipples,” says Feyh. “Anything past that and they compete for nipple.” They are weaned between eight and 12 weeks but the longer they are with their mother, the better.

Does will nurse only once a day, minimizing attention to the nest and increasing survival rates. Feyh keeps meticulous records. Some mothers exhibit “poor behavior” and cannibalize their own litters. One of Feyh’s breeders is on “last chance” status; she ate three of her babies and killed two others by jumping on them or throwing them out of the nest box.

“This doe kindled [gave birth] last night,” Feyh says, peeking into a nest box full of hairless bunnies and a well-behaved mother. “If I intend to sell an animal for breeding or as a pet it must be three months old.” Otherwise a “fryer” is harvested as they are weaned, weighing between 3.5 and 5 pounds. Roasters are six months or older and weigh five to eight pounds cleaned. 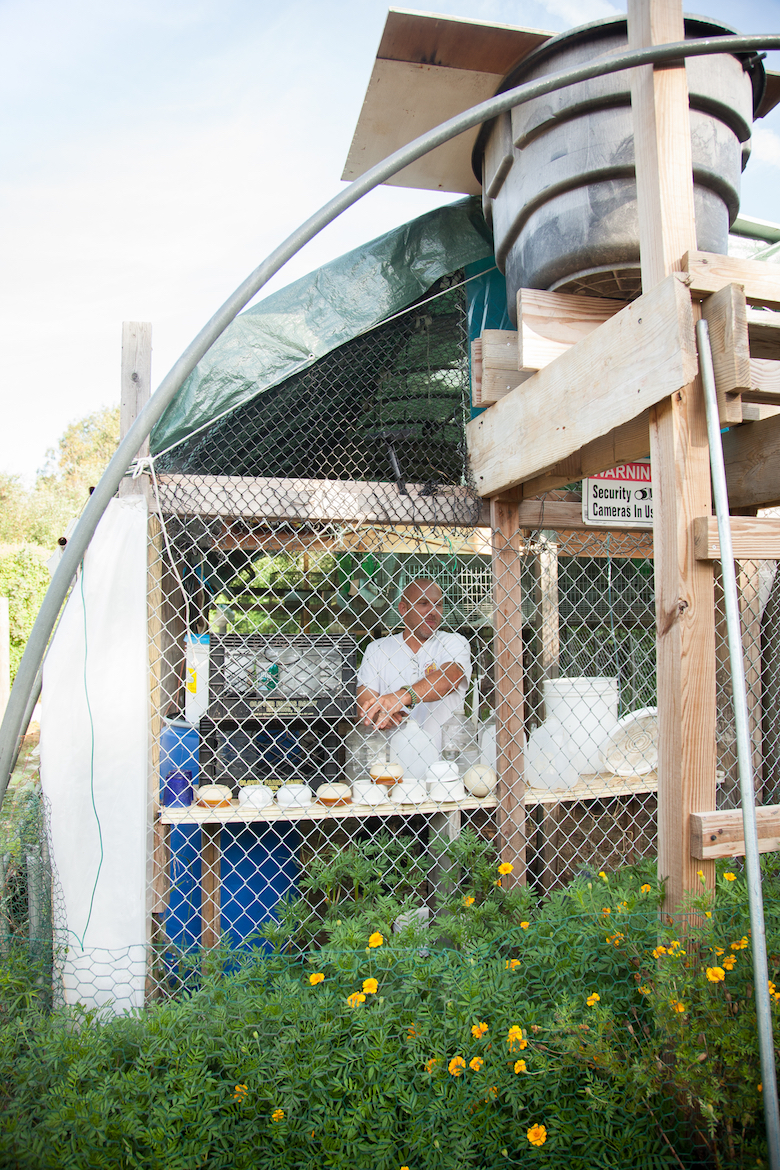 Feyh hopes one day he can harvest his own rabbits to sell, as it’s allowed in Vermont. In New York, poultry farmers can harvest up to 1,000 birds on their farm, but for now, Feyh must bring his rabbits, classified as “exotic,” to a USDA facility up the island in order to sell to restaurants.

“Ultimately, this is why I’m raising rabbits,” he says. “I’m a chef and when it comes to knowing where your food comes from, you can’t beat rabbits.”

His next investment just may be a pair of cross-country skis.