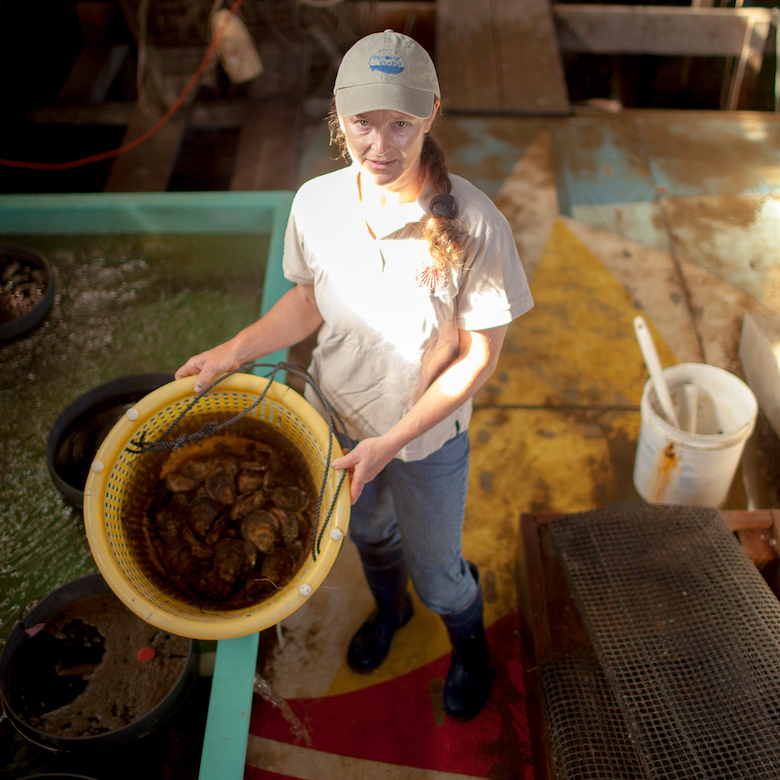 I sat down with my friend and oyster farmer Karen Rivara one Saturday night to conduct this interview.

We began with beer and oysters, then moved on to fish, chard, potatoes and more homemade beer. The interview didn’t happen.

I first met Rivara at a farm bureau convention in December 2000. We were strangers but roommates, both delegates from the Long Island membership. It was probably in Rochester, in a hotel attached to a convention center. Rivara and I were amiably awaiting one another, getting ready for dinner and making small talk about the long trip. I did not yet know what sort of farmer she was, but I’d caught a glimpse of her hands and forearms. Call me shallow, but at that moment, I sensed we’d get along.

Rivara is currently president of Long Island Farm Bureau. Not only is she the first gal to hold this position, she is the first femme fatale, too. She is also the first president to be an aquaculturist. While she’d protest and point out all the others who have worked equally hard to maintain one of Long Island’s most rudimentary provisions, shellfish, Rivara was responsible for the renovation and modernization of a near defunct shellfish hatchery in Southold. From there, she grows “seed” for oyster farms all over the region. Her training as a marine biologist also makes her a great teacher. Her answers are seldom brief, because it is just not that simple.

When we finally got to conduct the interview, Rivara was driving from her home in Greenport to farm bureau offices in Calverton for a Monday night board meeting.

Farmgirl Angst: Hey Karen, it was such fun having dinner with you the other Saturday. There was no way I was going to ruin it with questions like I have prepared for tonight. Correct me if I am wrong, but I remember you once held a “date night” [for the oysters] at the hatchery.

Karen Rivara: Right, right, I remember. That was fun.

FA: And all you did was turn up the temperature?

KR: Yeah, so first I get them primed; I feed them well. I know they are healthy, and then I just bring the temperature up. Didn’t we play Barry White?

KR: I have brood stock. There is a selection process, so yes, in a way it’s the same.

FA: If you had to write this article, what would you write it about?

KR: I am thankful for all the work and involvement of the local food movement, but I am concerned that it doesn’t extend further. Way too many people are too disconnected from their food source.

FA: Why do you think the stereotype of a complaining farmer persists?

KR: I think because when you are a farmer, you can’t separate yourself from the lives of your plants, your cows or your oysters. Other people can disconnect from their work because they don’t have to worry about things dying.

FA: You spend a lot of time on the water. Do you have any favorite boat metaphors?

KR: I think I use them all the time; our language is full of nautical and farming terms. People, non-farmers, use the term “cultivate” without even thinking. I think I say things like “righting the course” or “staying the course.”

FA: How many baby oysters are you responsible for?

KR: I know. Right? But not all of them survive, no way.