The Scallop Reuben at Bruce & Son in Greenport

Some bay scallops in the freezer remind our writer of a truly distinctive dish. 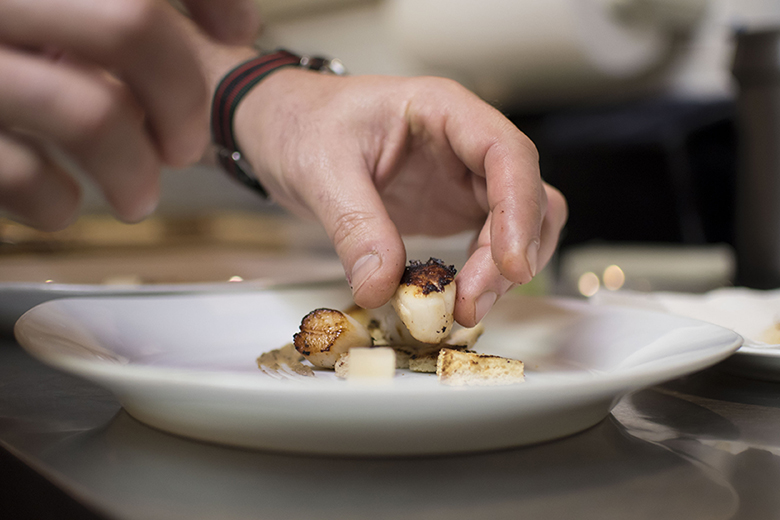 Five weeks since Peconic Bay scallop season ended, and I am forlorn. I stand in front of my freezer—door open, cold air pouring out—staring at my last little packed plastic pint container from the 2015 season. Oh sweet, lovely PBSs, I just can’t quit you. All I can do now is hoard the final bits of frozen little orbs and bask in the memories.

There is one, though, that might keep me holding on.

This season like every season (see my story Return of the Native), I was buying the thimble-sized scallops by the fist-full from Southold Fish Market, or asking my sister Linda on Shelter Island to hook me up with her own baymen connections. And that kept me happy all winter long. I sautéed them, fried them, ate them raw. The season may have started slow this year, but I didn’t. I ate them every chance I got.

The best and most memorable demonstration of PBS gastronomic glory came to me courtesy of chef Scott Bollman.

But even within that fury of scallop celebration, one dish stood apart from them all. The best and most memorable demonstration of PBS gastronomic glory came to me courtesy of chef Scott Bollman, the son in Greenport’s beloved Bruce & Son on Main Street.

It was a tepid winter Saturday for December, but perfect weather to traipse the streets of Greenport for this year’s Shellabration restaurant crawl. My husband and I bellied up to the counter at Bruce’s, one of the only spots in the world where I will break out of my normal restrained breakfast habits and eat with wild abandon. (How can you not consume copious amounts of that crazy bacon Bollman makes? You can’t, is the answer. You just can’t.)

But instead of my usual savory oatmeal or pig ‘n’ fig sandwich, I was presented with an odd-sounding dish, its name causing not just a little bit of brow-furrowing: local bay scallop with Reuben flavors. It appeared as curious as it sounded, with torn bits of homemade-looking rye bread and wavy pieces of red seaweed acting like a little nest for three, glorious caramelized scallops. The flavors were at once savory, sour and of the sea; sweet and pickled, full of both crunch and velvety softness. I tried to eat it slowly, loving every little bite. I’d never had anything like it.

I asked Bollman what it was all about, and he kindly bestowed the following information: The PB scallops were from Southold Fish Market (natch). He seared them in a hot, nonstick pan, to get that crispy, golden caramelized exterior. The seaweed he forages from the local shores, to make a riff on the Reuben sandwich’s traditional addition of sauerkraut. “We used a blend of rockweed, dulse [dried, Atlantic red seaweed], and sea lettuce foraged locally from the North Fork shorelines. After soaking and rinsing in salt water brine we then pack [it] in jars and cover with kavass liquid from our friends at Hamptons Brine.”

Then there’s the house-made toasted caraway-flecked grainy mustard, the rye procured from Kenyér Natural Bakery in Bohemia. (“Kenyer is a local artisanal bread smith that is one of the best here on Long Island,” Bollman insists sincerely). The crunchiness comes from crispy comte cheese chips Bollman makes from his ample choc-a-block stock, melting them into snappy bits on a hot plancha. Finally, there’s the quick-pickled Sang Lee radishes. The dish was cleverly paired with Regan Meador’s 2014 Tilting Windmills old vine chardonnay from Southold Farm + Cellar. And when Bollman revealed to me how he came up with it, the seemingly odd-sounding dish started to make a lot of sense.

“As a chef living on the North Fork, it doesn’t take much to inspire you,” he said. “Being open to absorb your surroundings and use its bounty is very much like breathing. Applying a mental rolodex of flavors and textures as well as technique and imagination is key to any cook.”

Part of me hopes he’ll repeat the dish again in the fall, but it’s exciting to think about what other wondrous things the PBS muse will bring to the plate. It’s six long months until the next fresh-from-the-bay haul to inspire the Son once again. Until then, I’ll remain content to defrost and sauté, dreaming of the wintry jewels growing in our East End waters.