Why ramps are so precious, and how you can grow them. 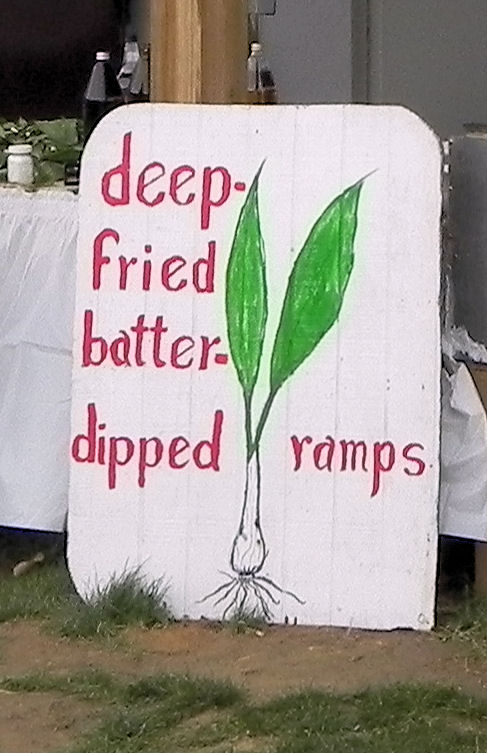 Marie Antoinette’s misleading statement has caused many a misunderstanding.  “Let them eat cake,” she sneered at the lowly peasants. In the queen of France’s time, it was not cake, but bread that was costly, thus aristocratic, bread that Louis’ arrogant wife wanted served on her patrician, gilded, porcelain plates. Flaky croissants, buttery brioches. Thick, heavy common cake was not for the dainty queen. Cake was for the poor, the beggars at the chateau’s back door, the “cattle” of the masses. They should be content with less than the best.

If you know anything about contemporary cattle—and I don’t mean the human population—you know that farmers plan and execute diets that produce happy cows. The finer the food, the tastier the beef, the creamier the milk. The quality of grains and selective grasses are critical for contentment, especially for dairy cows. So there are two similar-tasting grassy plants farmers never voluntarily feed their cows. They abjure wild onion, garlic grasses, and ramps. Assiduously.

I went to a boarding school for girls in Massachusetts, where wild onion and garlic grasses and ramps grow wild in the cool Northeastern spring. The corresponding boys school, across the river  (known wistfully as the “seven-mile-hyphen”) raised animals for meat, cultivated vegetables for our tables and maintained the dairy cow barn. The cows pastured in the surrounding fields. We knew spring had truly arrived with the advent of ramps and smelly grasses. Suddenly, the milk delivered to our dorm kitchens was bitterly redolent of garlic and onions. Ramps, after all, are wild onions (or leeks), with a heavy side of garlic, but lacking the plebeian curly tips of the pungent, plentiful grasses of the field, which are quite common, their availability rampant. But not ramps!  Grasses self-sow, while ramps multiply slowly from their bulbous roots. Ramps have become so scarce it’s forbidden to pick them in Canada, and they appear in limited quantities on savvy chef’s menus. Ramps—Allium tricoccum, from the onion family—are royalty.

Ramps were over picked almost to the point of extinction. A pound of ramps could cost $162.

The sight of this short broad-leafed vegetable springing from rich, shady soil beneath mountainous eastern forest canopies sparked spring festivals everywhere they sprouted from Georgia and the Appalachians to Canada. The Appalachian ramps celebrations brought tourists to boost the mountain economy, and the ramps-craze roused chefs to new creative heights. Unfortunately, it also nearly wiped out this wild delicacy. At the peak, greed destroyed the roots in their limited habitats. Ramps were over picked almost to the point of extinction. A pound of ramps could cost $162. Still scarce, they now sell for $5 a bunch: just a few sacred ounces.

Harvesters have since learned this hardy little treat can be cut above the root, so the ramps will return the next spring. They can also be cultivated, but the plant is very slow to grow, so it’s not really a viable industrial crop. There are a very few farms that offer them online, or at local farm stands. Once cut, they have a very short life. The leaves must be used immediately. The bulbs can be cleaned and frozen flat then bagged and will keep for up to six months in the freezer. Folks who live where ramps grow and know their local niches guard “their” ramps as closely as beach people buttress their native beach plum bushes; woe to those who trespass.

Ramps are easily spotted by their leaf clusters. Some of seven- to 10-inch high leaves cluster, somewhat like a shorter, softer tulip blade; others have narrower pointed leaves, similar to dwarf iris. The plant is different from onion or garlic grass, which actually looks like bright green tubular, skinny, corkscrewed grass, somewhat like chives on the surface. All roots, called bulbs, look like miniature green onions or scallions; the leaves are edible. They are distinguished from other grassy vegetables by the smell. If they don’t smell strongly of onions and garlic, they’re not either of the wild vegetables. They should not carry flowers or smell like lily-of-the valley. All parts of lilies, including lily-of-the-valley, is poisonous.  This is a critical distinction! Sniff before you bring it into your kitchen!

If you have patience, you can grow your own ramps from seed or seedlings, though they need shelter, warmth and a moist environment.

If you have patience, you can grow your own ramps from seed or seedlings, though they need shelter, warmth and a moist environment followed by a cold snap to break dormancy and spurt above ground once they’re mature. They’ll test your patience; it can take up to 18 months for germination and five to seven years to harvest! Your best bet is to plant seeds in several different micro-environments, to see which location is best. Please don’t dig up wild plants! Ramps self-seed, so you may get lucky and harvest a few seeds when wild plants bolt. Be observant of good conservation; always take only what you need, plan to care for will and use. Meanwhile, if you plan to gather wild ramps, do so judiciously, and cut the bulbs above the root so the plants can rejuvenate.

If you can find an herb farm in your vicinity, you may be able to buy seeds or small plants locally. The online companies listed here also provide guidance to help you reap a crop (over time!) Catalogue companies that supply ramp seeds and small plants are prairiemoon.com; seedman.com; asparagusgardener.com; rampfarm.com. Each of these companies also offers a variety of unique seeds and seedlings. Ramp Farm is the only one that grows ramps exclusively. The farm, in Richmond, W.V., invites visitors.