Innovation is on our minds as technology wends its way into every link of our food chain. 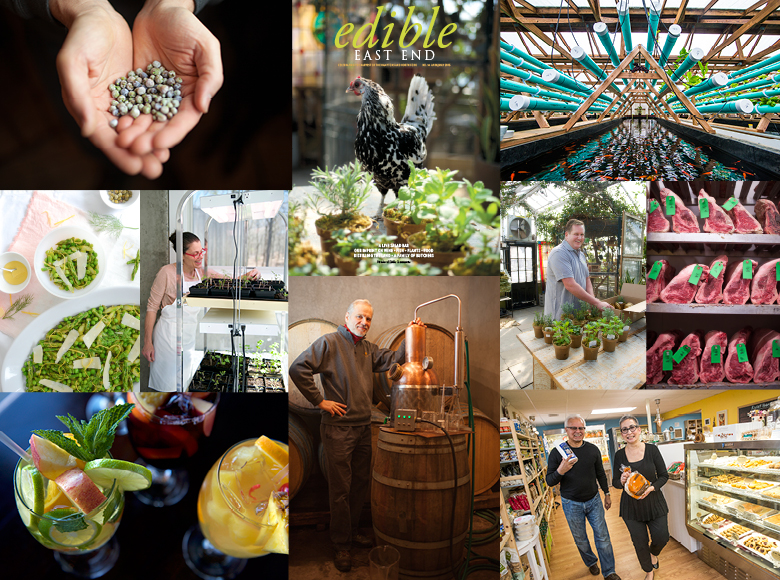 Wine and wasabi. Maybe not a match at the dinner table—however, a steely Long Island chardonnay does, in fact, go well with a spicy porgie roll—but as a combo, they offer a glimpse of the frontier of food and drink on Long Island. Take the new aquaponics farm in Manorville. Patrick Durkin at Fruit of Life is growing plants in water to which he only has to add (organic) fish food. Fish manure feeds the plants dotting PVC pipes that stripe the interior of his once-abandoned greenhouse. For now, the bulk of his crop is butterhead lettuce, but soon he’ll be able to harvest leaves from his young crop of wasabi for eager restaurants on the island and in New York City. A semi high-tech solution, a novel crop, a small footprint, a hungry demand.

Not so different from our more than 40-year-old wine country. We’ve had a string of good vintages, but the 2013, whose reds are just starting to be released this year, is exciting growers and winemakers as well as shops like Village Wine Merchant in Sea Cliff and Wainscott Main in Wainscott. After cooperative, perhaps climate-change-enhanced weather, the fruit was picked so ripe and so clean that wineries were able to create new products and (this is where they get really excited) wines to age. Anthony Sannino of Sannino Bella Vita expects his to improve for at least 25 years. Get some 2013 wines now and put them in your basement. Also check out Bedell winemaker Richard Olsen-Harbich’s column in this issue to learn more about what makes Long Island wine have its own character, its own sense of place.

Innovation is on our minds as technology wends its way into every link of our food chain—from drones on farms to cooking-inspiration apps like the Amagansett-based FeedFeed. This June, Edible is hosting a first-of-its-kind exposition called Food Loves Tech in New York City that will give attendees a chance to touch and taste, see and smell the devices, machines and companies changing our food culture. You will read more on this from us. The enthusiasm around foodtech and agtech and drinktech is the same we saw 15 years ago around farm-to-table.

Just as we have a column from a beekeeper and an angsty farmgirl, we have added, by popular demand, our “Ask Chef Emily” column to offer hands-on advice for cooking from your food community. Scarsella’s Flowers in Laurel Hollow has expanded his edible landscaping offerings as homeowners replace privet with blueberries and ornamental kales with kale for soup. Harnessing interest in grassfed steak and raised-right pork, Farmingdale-based Main Street Meats sells to local residents, restaurants, country clubs and food service operations within a 100-mile radius that “reaches from West Point to Montauk Point.” And with a 12.5-liter still, winemaker Roman Roth is reviving a decades-old dream to add gin—flavored with juniper berries from the towering trees outside his tasting room—to the suite of Wölffer products.

So we’ve got a lot of things growing. And fortunately plenty of great food and drink neighbors figuring out how to make the most out of what we’ve got.