Writer Laura Luciano realizes we can nourish during the entire cycle of a growing season. 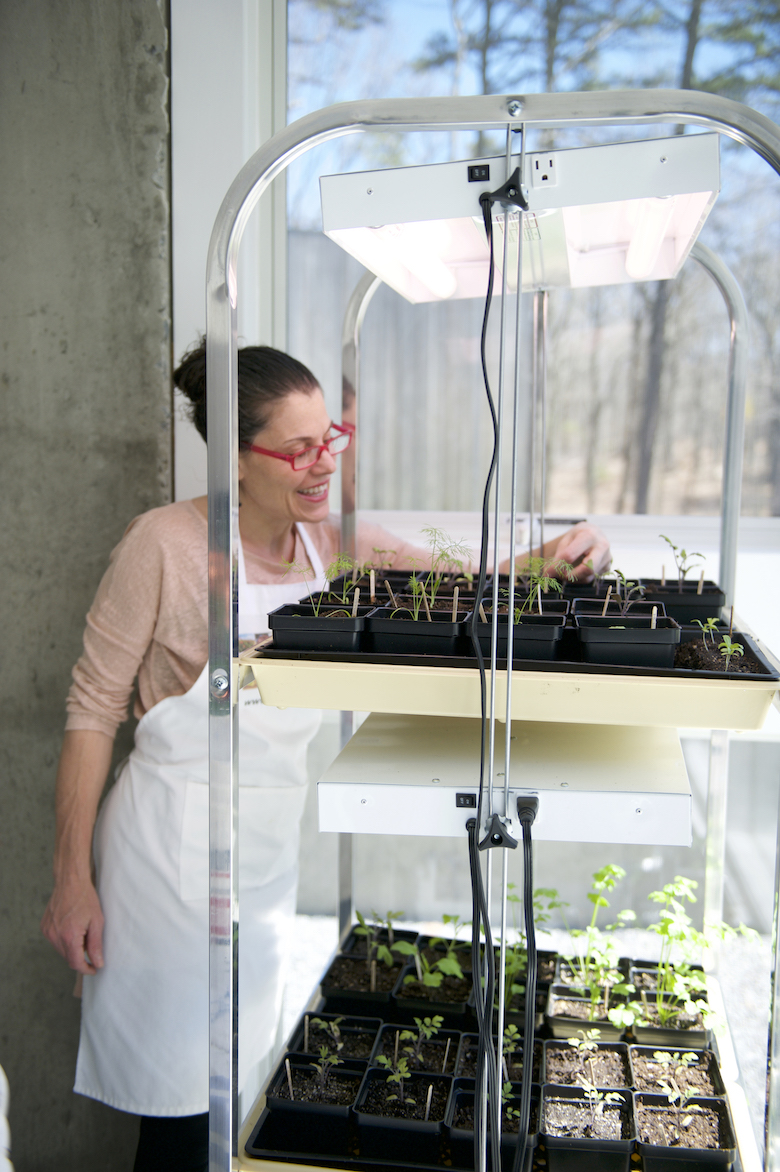 Laura Luciano at home with her seedlings and growing rack.

I doubted what I could grow from a teeny tiny morsel as I made my way through my first seed swap in the dead of winter 2015 hosted by the Long Island Regional Seed Consortium. And I figured the best way to learn about what’s truly in season, after writing this column for two years, was to grow my own garden.

Turning dirt into food is quite the journey. To start, a well-seasoned gardener quickly corrected me: It’s not dirt, it’s soil. Yikes, I’d already insulted Mother Earth and hadn’t even planted anything yet. Undeterred, and with seed packets in hand, I designed a rooftop garden with two 15- by 4-foot beds, a “square-foot plan” that would be home to a variety of vegetables, herbs and flowers.

I bought a germination cart, soil blockers, trays, lights and sprouting soil and desperately hoped my Johnny’s Seed’s arsenal would tell me what to do. Germinating my own seeds indoors seemed farfetched. But then I remembered what my friend Steph Gaylor of Invincible Summer Farms said at the seed swap: “Seeds want to grow.”

The last time I was this nervous about DIY was when I made my first puff pastry. And pastry doesn’t want to puff. What the heck was so scary? 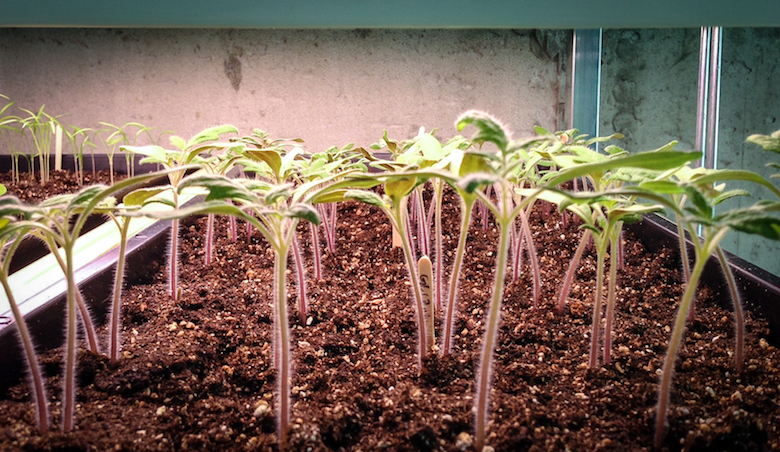 As snow fell, so did dirt on my dining room floor. My hands became dry and the nail beds filled with mud; my appreciation for farmers hit me in spurts. Meticulously, I labeled and drew tray diagrams of which vegetable, herb and flower was sown and ended up planting more than 300 seeds. Four times what the garden could handle! But there’s a reason: Germinate many plants to select the strongest and weed out the weakest.

Those 300 seeds included wild arugula, broccoli, herbs, kale, rocket lettuce and Swiss chard. I was anxious about the summer crop, so began the tomatoes, peppers, eggplant and fennel in the middle of February; experienced gardeners begin in March.

All set, I waited for my first sprout to appear. When it did, I felt like a new mother, who had just given birth to a beautiful baby pink flamingo Swiss chard. Shortly after, the rocket lettuce launched, the fennel spiked and the newly born kale arrived heart shaped. I was in love.

And before I knew it, all the plants began to emerge—all of them.

The germination cart stood in front of floor-to-ceiling south-facing windows in our kitchen. I gave it a quarter turn four times a day for maximum sun exposure and to give the strongest plants a workout. Think of it like resistance training for athletes.

When the plants came out of their infancy state—and started looking more like plants than sprouts—they were in a race for the sun. The endurance training was paying off. It paid off so well that I had a hard time deciding which were the weakest and sacrificing them. I had grown competitive plants.

They were soon too big for their crib; it was time to end the race for some and transplant others for when the weather warmed. Timely sowing saves money and space; hence, my summer crop. There is a nifty app I learned too late to use for last season: When to Plant by Mother Earth News. It’s a guide on what and when to sow indoors and outdoors with harvest dates.

It turns out the process of elimination was not so hard after all, because the cart became a mini salad bar. Every sprout burst with true-to-type flavor. For a glint of vibrancy, I added fennel sprouts to blanched asparagus and peas with shaved Parmigiano-Reggiano. To brighten my morning frittata, I scattered vegetable sprouts on top. Indulging on the seemingly weakest plants became a palatable process that made room for others to graduate to the garden. My makeshift nursery went back to being a kitchen. I had a moment of empty nest syndrome, but I knew they would be back for the eating.

Click here for her recipe for Asparagus, Sweet Peas and Fennel Sprouts with Shaved Parmigiano-Reggiano.