An old tilapia farm seeks to become a producer of high-end wasabi. 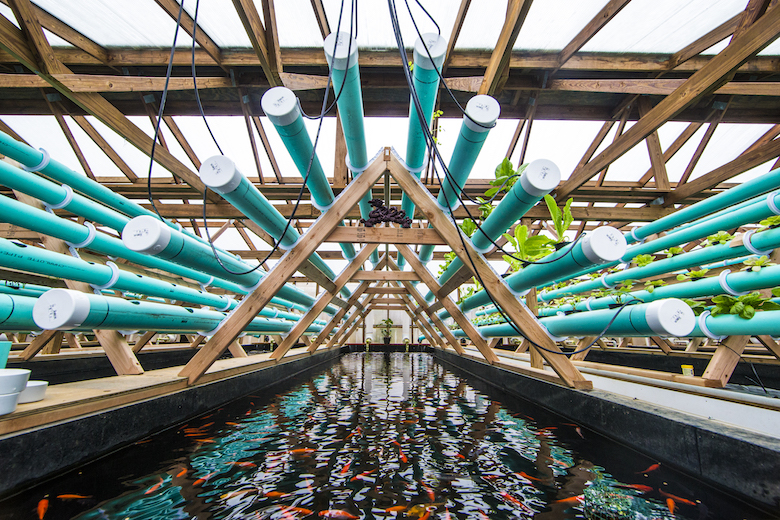 Koi and goldfish at Fruit of Life.

Patrick Durkin walks out to my car, welcoming me to what he says is the East End’s first aquaponic farm, Fruit of Life Aquaponics, located in Manorville.

Although only a small portion of the maze of blue PVC tubes running through his greenhouse are planted with baby lettuce, his enthusiasm for the project is infectious. It is a cold day in winter, but inside the enclosed space it is nearly hot and the air is thick with the smells of greenery and water.

But there is more to this greenhouse than meets the eye. Underneath each “plot” of PVC tubes is an 8,000-gallon tank that can hold up to 3,500 fish. Durkin has eight of these tanks, meaning he can raise up to 28,000 fish. 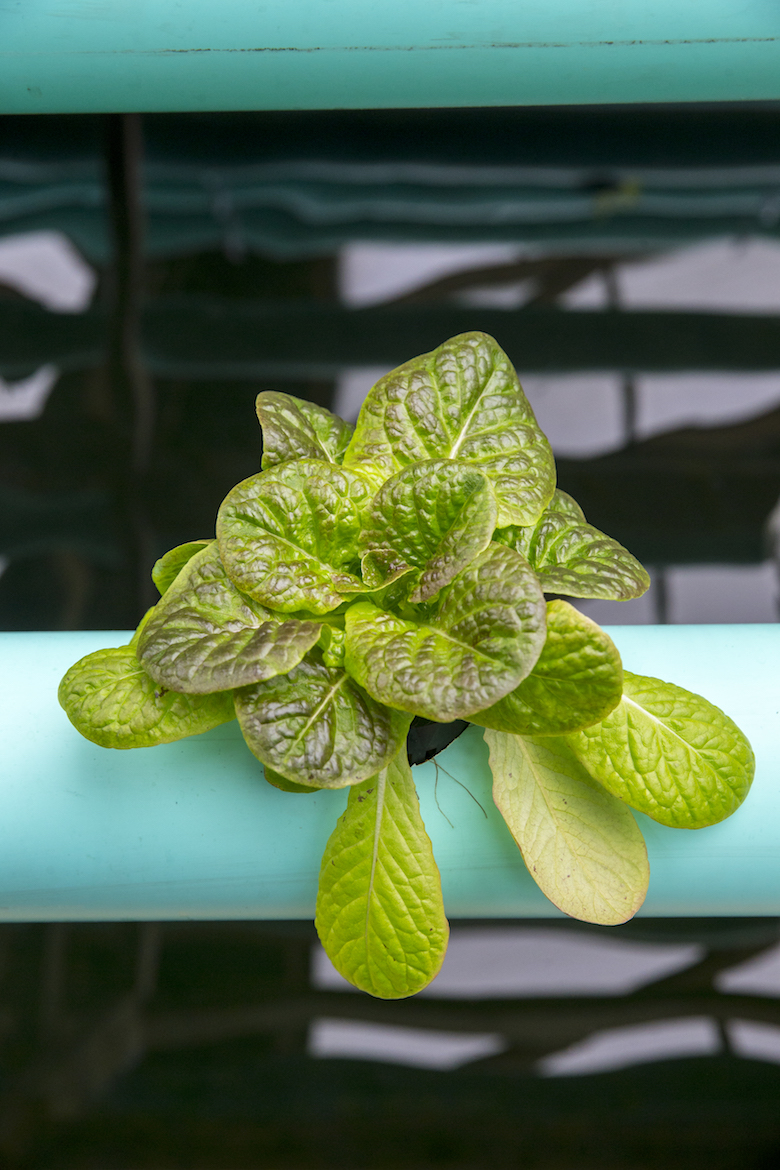 Although aquaponic systems are complex and require frequent monitoring, the concept behind them is simple: Plants are grown hydroponically in water and feed on the by-products of fish. The “closed loop” allows farmers to raise plants and fish at the same time with minimal addition of nutrients, except for organic fish food. The farm’s water is constantly checked, and excess nutrients—like nitrogen—are filtered out through a system of screens.

“I’ve always liked fish and farming,” says Durkin, who credits his mother with his early love of gardening. (The Bayport native also always had a fish tank; at one point he owned a 200-gallon freshwater tank filled with black convict fish.) Before starting this 64,000-gallon commercial enterprise, his biggest project was a 10-gallon tank that grew basil and parsley, with neon tetras as the fish component. He says he is not worried about making the jump. 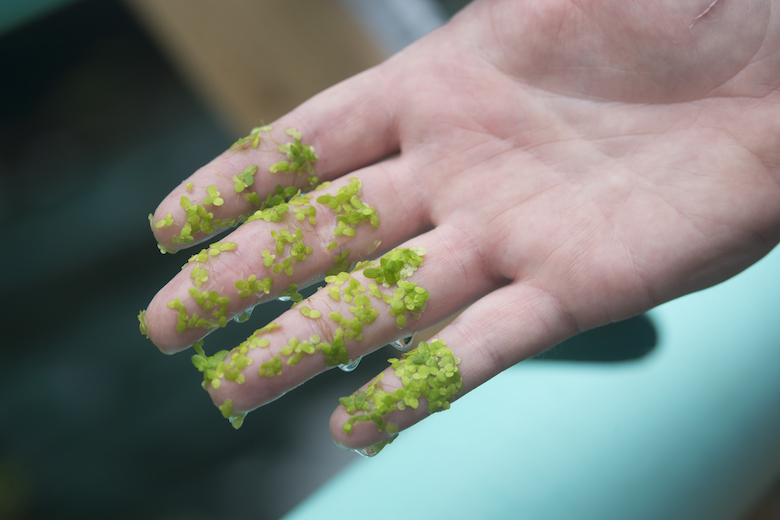 To start, Durkin is growing butterhead lettuce but soon will plant wasabi. In six months, he will be able to begin harvesting the leaves, which retail at $65 per pound. He hopes to transition to exclusively growing wasabi, because many wasabi growers in Japan were affected by the tsunami. Durkin believes he can produce up to 60 pounds a month. Wasabi leaves are in demand at high-end restaurants on Long Island for use in salad and tempura. In two years, when the whole plants are mature, he can harvest the root and sell it for up to $140 per pound. In the world of farming, that is a high return on investment.

“Aquaponics is going to take off,” says Durkin. He finds the online community around the burgeoning industry to be supportive and spends a lot of time researching on the Internet.

Durkin appreciates that his operation is “environmentally neutral,” saying that it uses 90 percent less water than normal agriculture. He lived on an organic farm for three and a half years, while stationed in Syracuse in the Air National Guard. At the time, the former aircraft mechanic rented a room from an agricultural professor. “I was always around the sheep and the cows,” says Durkin. In addition to the livestock, the farm raised test crops for the school. Durkin believes that being exposed to such a different range of vegetables made him more open to growing things like wasabi. 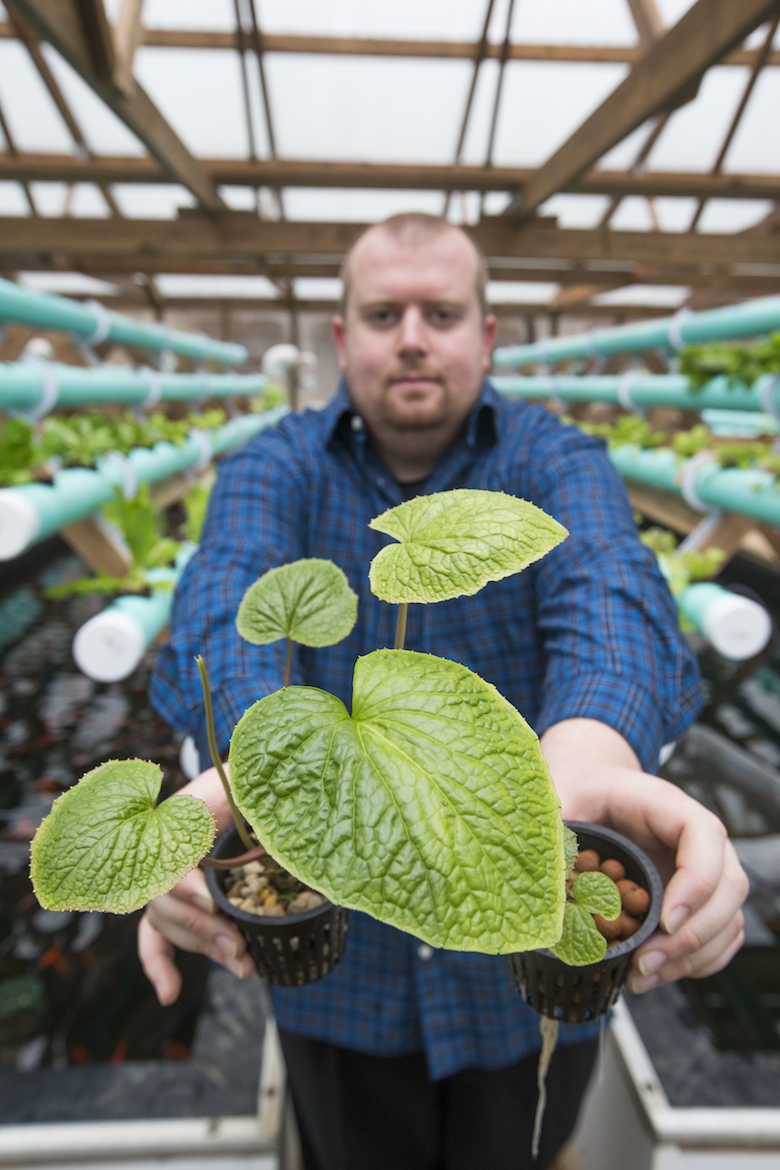 The 29-year-old says that his work as a mechanic for the Air National Guard “was like a machine, full gears.” Durkin liked to come home afterward and spend time on the farm, picking produce. “It’s nice to wash dirt off your hands instead of greasy oil,” he says.

However, the skill set he developed while serving in the military is part of what made Durkin able to start his own business. The strong background in maintenance in addition to managerial and office skills helped Durkin launch Fruit of Life.

Before the farm, Durkin worked various jobs: as a tractor-trailer mechanic, cab driver and gas station attendant. While looking at residential proprieties, he found his greenhouse, an old tilapia farm, for rent. The structure came with the eight 8,000-gallon tanks. The fortuitous timing led him to jump feet first. He credits his girlfriend, Shana Devito, 31, with helping him on the farm during the week, saying that, “I couldn’t do it without her.”

“You need to be a jack of all trades,” says Durkin, who enlisted the help of a friend to build the system. His eight-year-old son visits on weekends.

“I like bringing him here a bunch. He likes to fish. Also, to learn about the ecosystems,” says Durkin, who hopes that in a few years, there can be an educational component to Fruit of Life Aquaponics. “It is good to get the word out about aquaponic farming.”

In the meantime, Durkin is focused on finding a partner to procure a second round of investment after a failed Kickstarter. However, he isn’t too worried; he believes his venture is the future of agriculture.

“Aquaponic farming has been around for millennia,” says Durkin. “The Egyptians farmed aquaponically.”