Chloe Dirksen and Jessica Mortellaro star in a play about two women trying to navigate their fragile freedom upon release from prison. 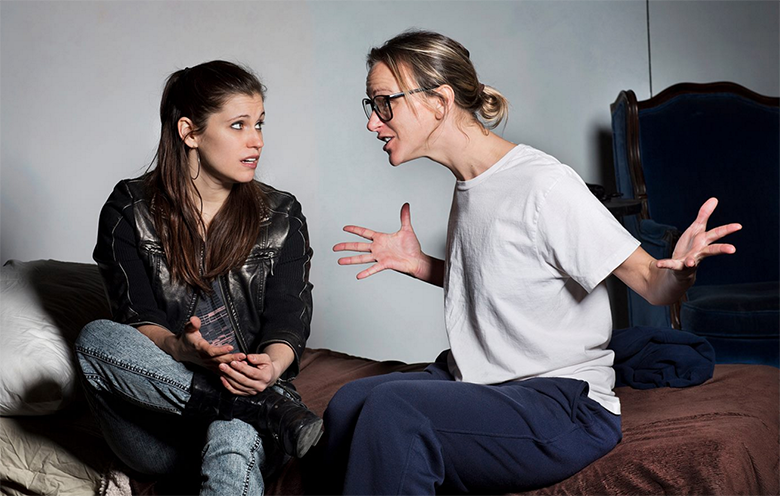 Until March 26 the John Drew Theater at Guild Hall in East Hampton will be presenting This Wide Night a play about the friendship between two women while in prison and after they get on the outside. Editor in chief Brian Halweil caught of with one of the starts, Chloe Dirksen to as how food fits in the play.

Your new show, This Wide Night, features two women who met as prisoners and are now struggling to adjust to civilian life. To prepare for this role, you visited a prison in Riverhead. Can you tell us anything about the food culture that you saw there and what impression it left?
At the jail in Riverhead we learned the inmates eat in their cells or their small common area; there is no cafeteria. They’re served breakfast very early, and they told us they all save bread bags to pour dry cereal in and eat it later, since they all go back to sleep and sleep for as much of the morning as they can. The correction officers told us that most of the fights involve food, especially peanut butter and jelly.
As part of creating an authentic set and feel, you had to secure some food and drink that is only available in Britain. Tell us what you got and how you got it.
The script calls for pizza, which is easy enough. We also needed cans of beer. We bought British beer and Irish cider in cans from a local beverage store. We also needed “chips” — what we call fries — so we bought frozen steak fries. And my friend Maria, who lives in London and happened to have come to New Y ork to visit last week, brought us bags of “crisps” — potato chips — so we have real British crisps in the real bags.
Are there any food or drink specific scenes or lines in the show?
Marie talks about getting “chips from the chippy.” I don’t want to give away too much, but it seems a love of pizza crosses all continental and social divides.
Buy tickets here.