The number of farms has more than doubled in five years.

Long Island is helping revive the hops industry in the Empire State. Thanks to recent legislation that is encouraging small scale breweries to source from within the state, the number of acreage in the state producing hops jumped from perhaps five acres nearly a decade ago to nearly 300 in 2015, according to Cornell University’s cooperative-extension division.

While the industry is burgeoning in the state, in the early 1900s, New York was the epicenter for beer and hops. More than 400,000 acres of hops were planted in the 19th century to supply domestic and international breweries. At the time, there were also over 300 brewers in New York State.

But what happened? Among other things, prohibition.

“Besides the hop crop being exposed to disease, in 1919, we had prohibition and hops weren’t really worth anything at all,” says Steve Miller, the hops specialist at Cornell Cooperative Extension of Suffolk County.

After prohibition, most hops production moved to the Pacific Northwest. Growers there supplied large-scale breweries instead of smaller producers. This trend of huge American breweries continued until the turn of the 20th century.

“Now the opposite is happening. There is a diversity in brewers,” says Miller. “The general population, especially 21 to 35 year olds, are very interested in craft beer.”

This interest has been a bonanza for hops farmers. Not only do craft breweries want different kinds of hops, but the proliferation of small scale breweries means a small hop farmer’s business is sustainable.

When Edible first compiled this list nearly five years ago, there were three entries for Long Island. Now, here there are at least seven. Cheers to that.

Owner Clifford Cornell started his business nearly five years ago. This small but mighty farm in Southold harvests four different varieties of hops: Cascade, centennial, chinook and Willamette. They offer both wet and pellet hops for breweries and home brewers.

With a freshness guarantee of 36 hour delivery, the hops are available online or at their farm stand, on 2325 Hortons Lane in Southold.

As a 23-year-old employee of Greenport Harbor Brewer Company, Justin Wesnofske saw an opportunity for his family farm, a hops crop.

At first, his father was skeptical but now his one acre plot in Peconic produces up to 250 pounds of hops for Greenport Harbor Brewing Company, Long Ireland Beer Company and Port Jeff among others.

Walking through the Hop Yard

A hops pioneer on the island, this Wading River farm produces wet and dry hops for Port Jeff Brewing Company as well as other breweries.

In business since 2010, John Condzella and his father planted two acres of hops on their 20 acre farm. They recently acquired a German-made harvester through a Kickstarter campaign, which they share with other hops farmers in New York State.

Owners Pat Libutti and Marcos Ribeiro might be new to the hops scene—this is their second year as an operational farm—but the pair plans to be the largest hops farm on Long Island.

Their farm, off Route 48 in Mattituck, was already making headlines this January when mysterious stakes, which are essential to hops growing, appeared in the ground.

The 20-acre site was previously owned by the Ruth Pollio Revocable Trust, of the Polly-O string cheese family. It was being used for yard waste dumping, angering residents and going against the proscribed use of the land, which is part of Suffolk County’s Farmland Preservation program.

The owners are focusing on four varieties of hops and plan to be certified organic by the end of the year.

This North Fork nursery, which debuted in 2008, provides the hops for Southampton Publick House (see our story here), the  first Long Island brewery to make a beer with only Long Island-grown hops.

Jaclyn Van Bourgondien and Andrew Tralka of Farm to Pint.

Operated by husband and wife duo Jaclyn Van Bourgondien and Andrew Tralka, this half-acre farm is a relative newcomer to the North Fork. 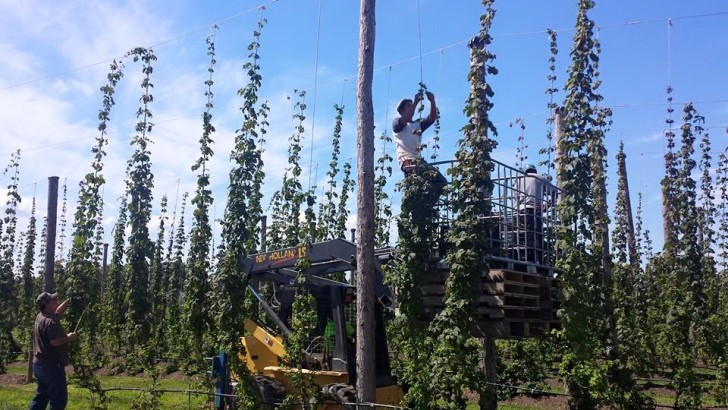 Owners Thor Kampher, Tony Caggiano and Melissa Daniels began growing hops four years ago. This 43-acre farm in Jamesport grows five different varieties of hops on a portion of their land.  In addition to educational tours, they are open for weddings and other private events. A true vine to table experience. This September, they are excited for a wet hops festival for craft brewers.